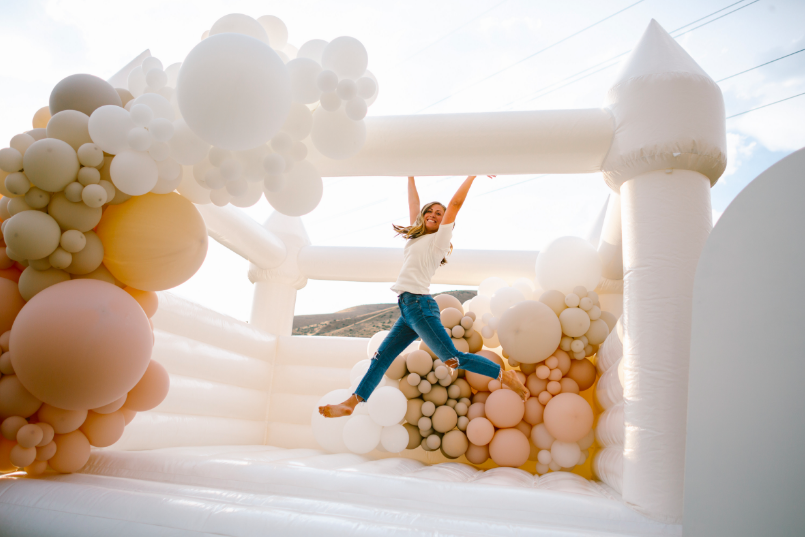 For more than two years Leslie Payne’s basement was almost always filled with balloons. The former sixth grade teacher turned entrepreneur started a business in 2019 with her sister, creating balloon installations for parties, weddings and events. When they started, the sisters had trouble describing what they did, but their Instagram photos with incredible balloon arches spoke volumes and turned their business idea, The Balloon Loft, into a huge success.

“We looked for something that we hadn’t seen in Utah. We found companies in big cities that were doing these incredible balloon installations and decided to try it. If you’d told me I would be blowing up balloons for a living a few years ago, I wouldn’t have believed you – I’d ask why?” laughed Payne.

The Balloon Loft made its debut in the Spring of 2019 at a bridal expo at Wadley Farms in Pleasant Grove. Leslie and her sister Catherine inflated close to a thousand balloons to adorn 70 feet of staircase railings, painstakingly attaching clips to each one so they could deflate and reuse the balloons.

The sisters’ balloon creations were a massive hit at the bridal fair, but when they came to pick up the balloons, they’d all been popped. “Catherine and I just looked at each other in disbelief. That was heartbreaking,” remembered Leslie. Thankfully, they were reimbursed for the cost of the balloons. “We were stingy back then. Now we don’t care if people pop the balloons.”

The Balloon Loft has been growing steadily since it started, mostly thanks to social media and good word-of-mouth. Payne has had to learn the business through trial and error. Large balloon installations weren’t demonstrated on YouTube and there were no classes to take. “It’s so exciting that we’re at this point. It was tricky getting started and going through times when we wondered if it was worth it. We had to shut down for a few months in 2020, but that ended up being so good for my family and the business too,” Payne explained.

In 2021, Leslie came to a fork in the road when Catherine moved out of state. Leslie had to decide whether to keep going on her own. She didn’t make the choice lightly but decided to carry on solo. In the last several months Leslie has hired employees and moved all the balloon making paraphernalia out of her basement and into a shop. On August 13, The Balloon Loft will open its doors on State Street next to Osmond Design.

“To be able to turn something you love into a business is such an amazing thing. It’s still work, and it can still be hard, but I’m excited to get to work every day,” said Payne. “Balloons are fun.”