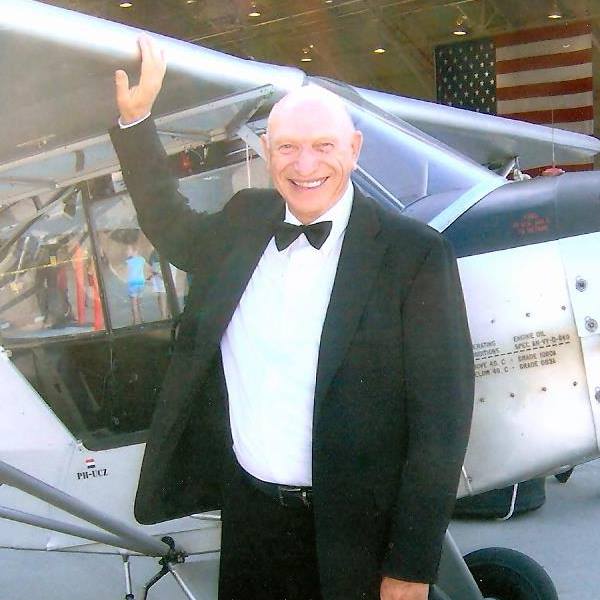 Talking with Phil Wasden is like talking to a human dynamo. The 84-year-old is not slowing down and has participated in a myriad of activities in since becoming a senior citizen.

“Thirty-four years ago, I believed fifty to be a hinge-point in my mortal living. I thought each year beyond 50 ought to be celebrated by walking, jogging or running the corresponding age to laps on whatever track might be available,” said Wasden.

For thirty-four years, Wasden has maintained this rite, sometimes recording the results.

“This year, I used both a lap counter and a GPS tracking to record the results. In checking past years’ statistics and I turned in the fastest lap-time yet. I set a goal of three hours and thirty minutes to walk my 84 laps at the Lehi Legacy Center. I accomplished the feat in two hours and forty-nine minutes (169 minutes) covering 11.4 miles,” added Wasden. Neighbors and friends helped celebrate the accomplishment by bringing balloons, cookies, a cake and homemade gifts.

This feat is only one accomplishment for Wasden, who has garnered many in the years since his beloved wife passed in 2001. He has participated in the Huntsman Senior Games and three years ago brought home two medals, a gold and a bronze. The gold medal was for the free-throw and 3-point shoot, an untimed event where he had to shoot 25 free throws and then shoot from six different three-point spots on the court. Wasden sunk 17 free throws and four out of the six three-pointers and has participated in the Senior Games for 13 years.

Many patrons of the Legacy Center have noticed the time and effort he spends improving his shooting ability. “I go to the Legacy Center at about 6 a.m. and leave around 10 a.m. I shoot around, walk my laps on the track and then take a relaxing swim in the pool. What a wonderful facility we have in Lehi that makes all this possible,” said Wasden.

Lehi Chief of Police, Darren Paul, became friends with Wasden as they worked out at the Legacy Center. Paul noticed how people gravitated to Wasden and how helpful and friendly he was and asked if he would serve as the police department’s chaplain. Wasden researched the duties of a chaplain and agreed to the position. Since then, the fire department also reached out to Wasden, who has served as chaplain to both organizations for over five years.

Wasden was given a priesthood blessing to perform his chaplain duties by a general authority from the Church of Jesus Christ of Latter-day Saints. “I am part of a group of 2500 chaplains around the world. I also serve on the ethics board. I am a standing minister for the two groups. I have conducted services for five K-9s, performed ten marriages and participated in promotions and retirement ceremonies. I also accompany appropriate personnel during death notifications. I particularly love to perform wedding ceremonies,” said Wasden.

He is committed to helping support first responders and their families. Wasden added that he served as bishop for the Church ward in Chico, California, from 1973-78.

Wasden’s eyes twinkle when he talks about being a choir member in a group conducted by KUTV’s Chief Meteorologist Sterling Poulson. Poulson is the Director for the Choral Arts Society of Utah. Wasden had the honor of placing a wreath on the Tomb of the Unknown Soldier. “This was a very emotional day for me,” he added. He was honored to attend a ceremony held on the SS John W. Brown, a troop carrier for the U.S. Navy. There are only five carriers of this kind left, and that is the only operational one. He tossed a wreath into the water to commemorate the deceased seaman who perished in the two world wars. The choir also performed at the National Memorial Day concert at the John Fitzgerald Center in Washington D.C. and Carnegie Hall in 2019.

Wasden’s excitement was evident when he mentioned the choir would be traveling to France to honor the invasion of Normandy or D Day in June of next year. The group will also be singing at the Eiffel Tower.

The energetic Wasden is also a member of the Sons of Utah Pioneers, where he has served as President. He loves his heritage and wants to leave a legacy for others to honor and enjoy.

Wasden is an example for everyone. His energy, devotion to service and friendly disposition is a joy for all who know him. He has collected many souvenirs displayed on a Christmas tree he keeps up all year in his Traverse Mountain home. “I love to make memories,” he said and making memories he surely does. His life is a tribute to those who find joy and satisfaction in service