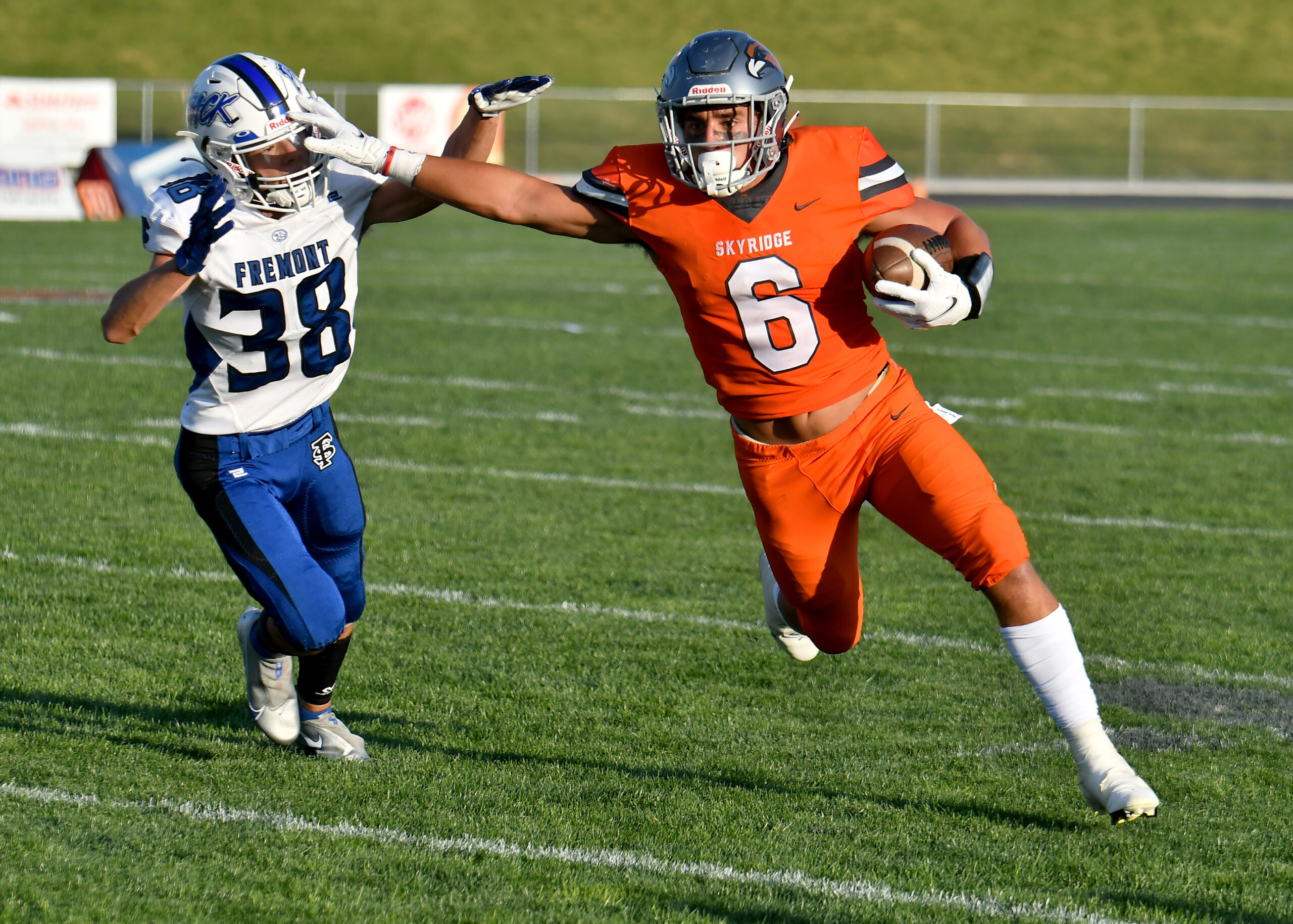 The Skyridge football team easily shut out the Silverwolves of Fremont 31-0 to open the 2021 football season in the televised kickoff game on Aug. 12.

The Falcons worked out some kinks during the first half of play as the smaller but quicker opposing defense disrupted the ground attack. After a scoreless first quarter, the Falcons scored two touchdowns to close out the half with a14-0 advantage.

The Skyridge passing game was out of sync during the first quarter as the receivers could not hold on to the well-placed passes from returning junior quarterback McCae Hillstead.

The first points came about three minutes into the second period on a one-yard plunge by senior running back Jeter Fenton that was set up by a 52-yard catch and run by senior wide receiver Zeke Ah You-Greco. Senior kicker Cole Barker added the PAT.

The seasoned Hillstead later connected a 13-yard touchdown pass to junior speedster Smith Snowden midway through the second quarter. This gave the Falcons the energy they needed to end the half on a positive note.

In the third quarter, senior tight end Teagen Calton hauled in an 80-yard pass from Hillstead for the next score. Barker added a PAT plus another three points with a 26-yard field goal later in the period.

Outstanding defensive performances included two sacks by junior outside linebacker Collin Sheffield as well as a fumble recovery in the endzone during the fourth quarter for the game’s final touchdown. He had seven tackles overall, including six solo and four for a loss.

Hillstead said, “I’m feeling good about this season. We have a lot of good things coming for us. This was a good first game with a lot of guys getting their first start and I think the experience they got tonight was great. We are just going to keep on getting better and better.”

The Falcon defense pressured the Fremont quarterback all night long, never allowing the offense to get untracked. Skyridge totaled seven sacks during the contest.

Two-way player Snowden covered the Fremont receivers like a blanket throughout the game, never allowing a reception to be thrown his direction. Junior defensive end Sione Westover had two sacks as well as a forced fumble in the endzone.

Westover said, “We have been studying Fremont all week long and tonight it was time to execute, and we did that well. We still have more to go but tonight was a great job by the team.”

“We were confident going in because we knew coach put together a good game plan for us. We knew if we just played hard the D-line and the backers would fill the gaps and make our jobs easy,” said Sheffield. “I love these boys and these coaches;it’s going to be a great season.”

Skyridge Head Coach Jon Lehman said, “The positive presence of Hillstead is important on the field. He is the guy who is in charge when we go out there. His experience is impactful in every scenario. He handles his responsibilities and sets the tempo.

“Sheffield made a lot of big plays tonight that were very noticeable. He also had a couple of open field tackles that were really tough plays. I was really proud of him. He played a really good game.”

The Falcons showed flashes of their potential in what promises to be a tough season in the elite Region 4 of 6A.

“We have practiced hard all summer and as a team we just keep on getting better and better. The game-like situations we do at practice prepare us for tough games like this one and ones to come. Our coaches prepare us well for all kinds of play and we are ready for the season,” said Hillstead.

Lehman said, “A lot of things are brand new this year and the process repeats for this team. Our guys need to come back to work tomorrow and stay competitive and stay together. If we play for each other, we will continue to get better as the season progresses.”

The Falcons will visit Woods Cross tomorrow (Aug. 20) with a 7 p.m. game time.