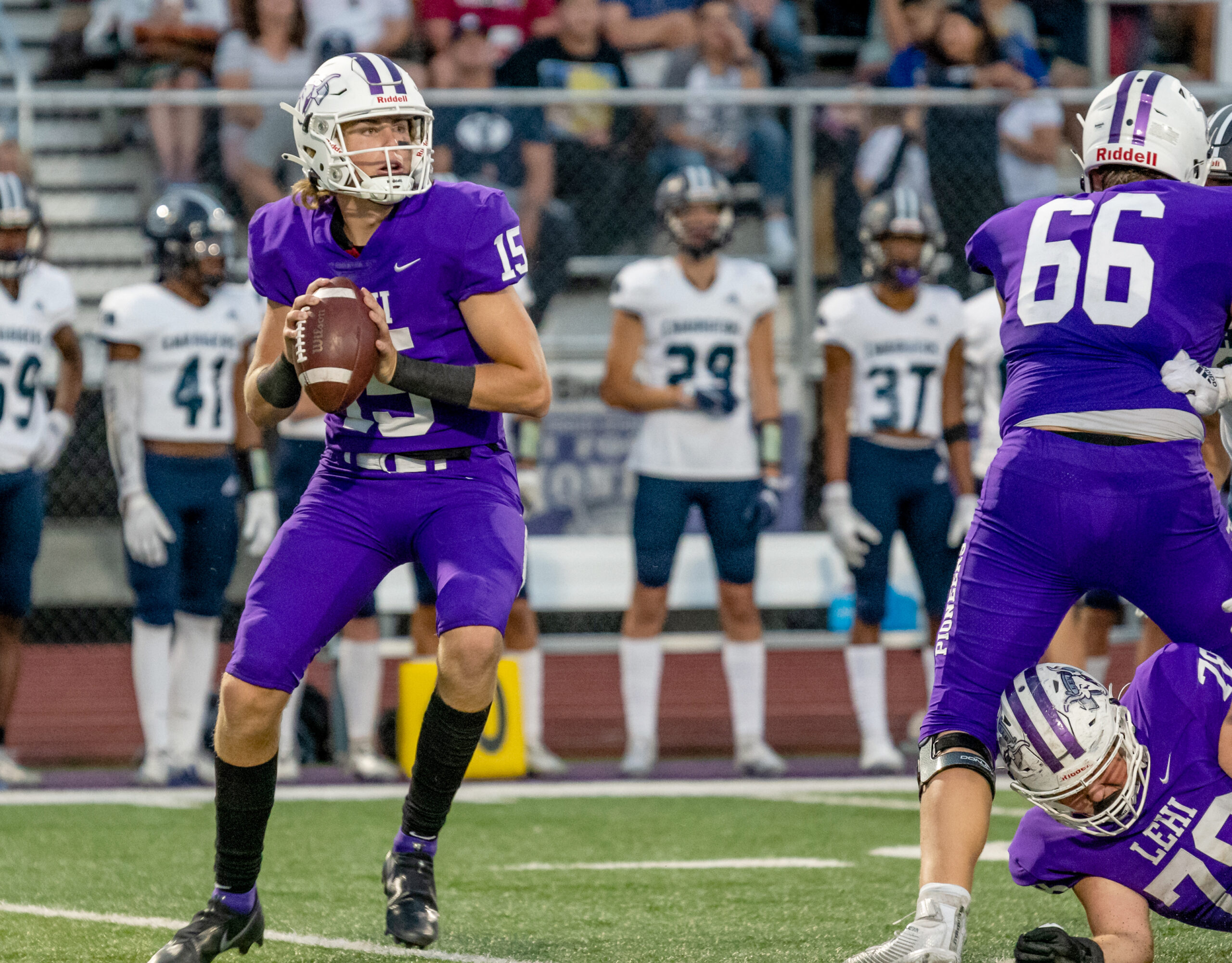 Despite arriving much later than normal after traffic delays, the Pioneers scored in every quarter on the way to a comfortable 31-17 victory over the Silverwolves on the road Sept. 17. They never trailed in the contest.

The teams exchanged the ball a few times before the first break of the game. Senior Helaman Ofahengaue recovered a fumble by Fremont on their 44-yard line and Lehi capitalized quickly with a 35-yard touchdown by junior running back Carson Gonzalez on the ground.

Senior kicker Zane Goodrich converted the PAT to give the Pioneers a 7-0 advantage with four minutes left in the first quarter.

The Silverwolves got on the board with a field goal early in the second period. The Pioneers answered when junior quarterback Jackson Brousseau connected with senior wide receiver Steele Cooper for a 25-yard touchdown reception. The Goodrich PAT made it 14-3 with three minutes left in the half.

On Fremont’s next possession, junior defensive back Kadiyon Sweat grabbed an interception and returned it 30 yards for a touchdown. The Silverwolves later managed to reach the end zone just before the break, but Lehi still led 21-10 going to the locker room.

Fremont scored again early in the third quarter to pull within four points. Goodrich kicked a 29-yard field goal late in the period to extend the lead to 24-17.

The Pioneers capitalized on another turnover when sophomore defensive end Grayson Brousseau recovered a fumble by the host school on their own 23-yard line.

Jackson Brousseau tossed to Sweat from there for another touchdown, making it 31-17 with nine minutes to play. Sweat made a second pick late in the fourth quarter to end the last hope for the Silverwolves.

“I thought our defense set the tempo early on,” said Lehi Coach Ed Larson. “Isaac Terrell put tremendous pressure on their quarterback and forced him to throw when he really didn’t want to. Kadiyon got those turnovers and that really helped us.”

The coach thought senior linebacker Tristan Royce had a “pretty decent game” after being held out because of a shoulderseparation and being moved to the inside from his former spot on the edges. Larson added that Ofahengaue also did well defensively.

“Steele Cooper made some really clutch catches for us,” he went on. “He got a TD over the top when he fought for the ball with a defender and managed to wrestle it away.

“Fremont was a real good opponent for us,” Larson said. “It has been a solid 6A program.” The coach wasn’t happy about his team giving away a couple of cheap scores, though it didn’t end up costing them this time.

He also isn’t yet seeing what he’s looking for from the offense. “Our offense played well, but not as well as we need to playagainst the teams we have ahead,” Larson said.

“We have a way to go in building our confidence,” he continued. “We have great players who want to do well but I’m not quite seeing the competitive mindset at this point. We need to be able to impose our will in all three phases of the game and we’re not there yet.

“There’s a certain way to approach a game that sets you apart from the average team,” he added. “There’s still things to clean up on defense too; we allow big plays more often than we should.”

The Pioneers have four games left in the regular season and all of them are important. They take on Jordan for Homecoming tomorrow (Sept. 24) at 7 p.m.

“It’s our first week of region play and we have four in a row,” Larson said. “After those, we’ll see where we fall in the playoffs.”