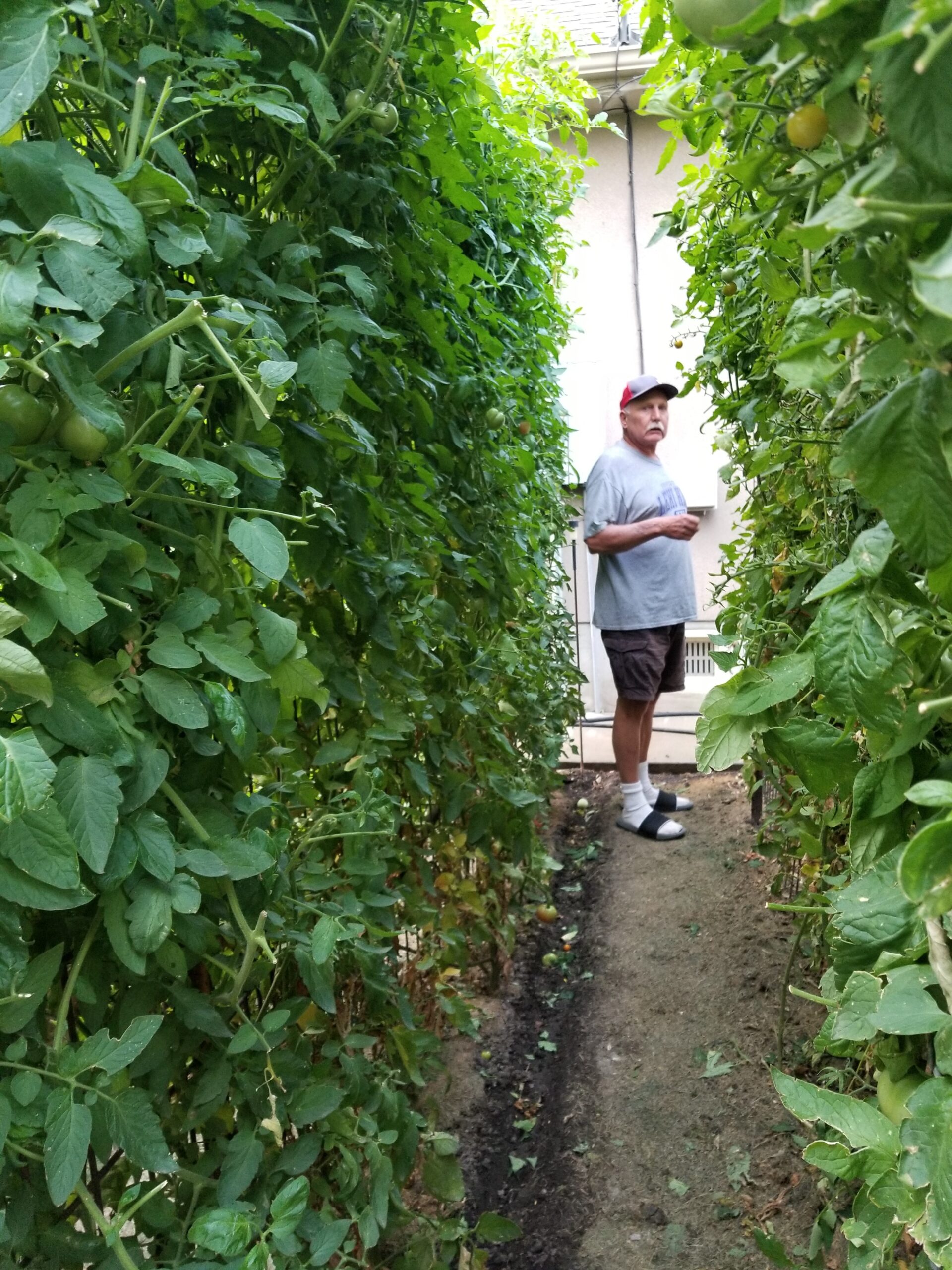 “People see something growing above the fence and ask us, ‘Are those tomatoes?!’” Terry and Debbie Kirkham’s rows of tomato plants proudly peek over the six-foot fence next to their home on 500 West. “If they have something to climb on, they’ll keep going,” Terry Kirkham said of the Early Girl and Super Fantastic tomatoes rising two feet above the eight-foot rebar cages he built.

The Kirkhams’ tomatoes don’t climb to such great heights without a lot of training and pruning. “They try to grow together – every week I have to clear space between the rows,” Terrysaid. “They’ll keep climbing until they freeze.”

“When he trims them, they head toward the light,” added Debbie.

Terry fashioned a rebar trellis-like cage for their tomatoes about ten years ago. “No matter how big of a cage I made, they would go up above it,” remembered Terry. He decided to experiment and see how tall the tomatoes would grow if he kept making the cage taller. His 20 tomato plants take up mostly vertical space, leaving more room for corn and peppers in the side yard garden.

“I have to get a ladder out to reach the tomatoes at the top. He said this makes it easier because I don’t have to bend over, but now I have to climb a ladder,” said Debbie. Not every variety of tomatoes will climb. She has no trouble reaching all the Celebrity tomatoes, which are tall compared to other Celebrity plants, but dwarfed by their eight-foot-tall neighbors.

“Our friends are always telling us they can’t get tomatoes to grow. They’re probably overwatering them,” Debbie explained. The Kirkhams only water their healthy plants every five days.

“We give tomatoes to everybody. We keep our family and friends in tomatoes,” said Debbie. She bottles tomatoes to use in soups and casseroles, but their favorite use is for fresh salsa.

“Every single week I make a big bowl of salsa,” laughed Debbie. “We’re not fussy with the chips, as long as it’s loaded with salsa.” She’ll often make a separate bowl of extra hot salsa just for Terry.

The Kirkhams have had acreage on 500 West for 45 years, living in an older home for the first 25 years before building a beautiful brick home on the lot 20 years ago. Terry’s two sisters live close by, and he takes great pleasure bringing them a bag of tomatoes every week. Friends from out of town will stop and get a box of tomatoes from Terry before they head home. “I love it. This is what I do,” he said.