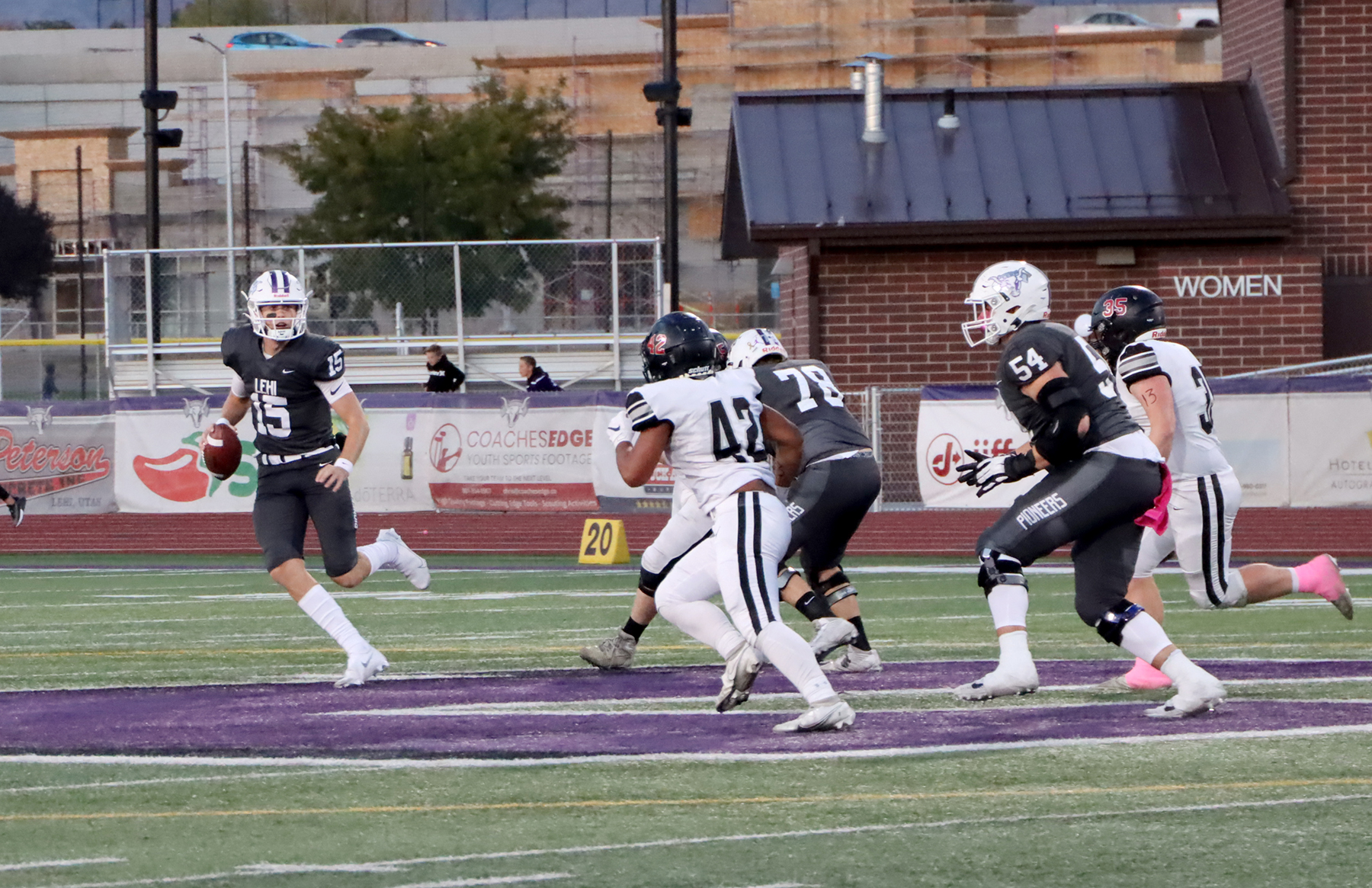 The Pioneers got off to a slow start against the visiting Hawks but tallied 35 points in the third quarter on the way to a resounding 49-14 victory to send off the team’s seniors duringthe last home game of the regular season.

Alta actually got on the board first with a 29-yard passing touchdown at the 2:33 mark of the first quarter.

However, Lehi answered on the very next drive. It got started with a typically strong return by junior Kadiyon Sweat to the Pioneer 32. Lehi junior quarterback Jackson Brousseau connected with senior wide receiver Jaxon Christensen for a 14-yard pickup to start the series.

Christensen later caught a pass to convert on a 3rd-and-12 to keep the drive alive. Brousseau picked up the next first down with a 10-yard scamper and then junior running back Carson Gonzalezrushed for 23 yards in three carries to push the Pioneers to the 8-yard line.

Brousseau then found his younger brother, sophomore tight end Grayson Brousseau, in the end zone for the score with 9:56 left to the break. Senior kicker Zane Goodrich made it 7-7 with the PAT.

Lehi scored again at the 5:48 mark on a 2-yard run from senior Helaman Ofahengaue following a march keyed by a 24-yard toss from Jackson Brousseau to senior wide receiver Steele Cooper.

The Hawks reached the red zone before the half but missed a field-goal try and the Pioneers carried their 14-7 advantage into the locker room.

They got right back after it to start the third quarter. A couple of Christensen catches and a Gonzalez run yielded first downs during the drive, which was capped by a 29-yard burst from senior running back Isaac Mills down the left side. The PAT made it 21-7 at the 9:35 mark.

The Lehi defense was fierce all night and stymied Alta on their subsequent possession, but the drive got a reboot after a penalty and moved inside the red zone after another one. The Hawks eventually capitalized with a touchdown to narrow the gap to seven again with 5:42 left in the period.

This was the critical turning point of the game, and the Pioneers were more than equal to the task. It took just 20 seconds for them to respond. Sweat pushed Lehi to the Alta 40 with his kick return, and Jackson Brousseau found senior wide receiver Isaac Dayley ahead of his cover for the score from there.

After that, the rout was on as the Pioneers scored three more times before the end of the period. Junior tight end Koby Moore got the first one with a 16-yard grab.

During the following Alta possession, the Hawks went only backwards, and Sweat returned the ensuing punt 62 yards for a touchdown.

The next time Alta punted, the kick was blocked by junior defensive end Isaac Terrell and downed at the Hawk 23. Three plays later, Christensen converted on a 4-yard pass play. Goodrich completed the tally for the evening with the PAT as there were 31 seconds left in the quarter.

Brousseau finished the night completing 22-of-33 for 241 yards and four touchdowns.  He’s completing 68 percent of his passes to this point in the season and has 17 touchdowns against just two interceptions.

“I was really, really pleased with how we played,” said Lehi Coach Ed Larson.  “Our defense has given us that kind of effort more than once, but it was the best we’ve seen from the offense in a long time.

“Jackson had another great game,” he continued. “Our receiversran good routes and had good spacing; it was a nice coming-out party for them.”

The Pioneers used 12 receivers in the contest, led by Christensen with nine catches for 74 yards. Dayley had three for 58 yards and Grayson Brousseau made four catches for 44 yards.

“The offensive line consistently gave us time for Jackson to look for his No. 2 and No. 3 options,” Larson continued. “When Steele Cooper snagged that high slant pass it loosened up the offense. It gave Jackson confidence that his guys would go get it, so it was a key catch for us.

“The tight ends also did a great job in pass receiving as well as with their blocking assignments in the run game,” he said. Lehi used six rushers, led by the reliable Gonzalez with 12 carries for 73 yards.

The coach said he was feeling pretty comfortable after the third touchdown but had to think twice when Alta scored after those untimely penalties. “When the offense came right back and scored again at that point, that’s when the game started to take off,” he said.

Sweat had a monster night with three kickoff returns for 113 yards and five punt returns for 116 yards, including the long touchdown run.

“He was right in front of me when he caught that ball and there were five Alta players coming at him,” Larson said. “He got banged by one near the sideline but then another one knocked him back into the field of play and he went on from there.”

The defense has been solid all season and this game was no exception. “I thought Hema Katoa played really well and fast as an outside linebacker,” the coach said. The junior finished with seven assisted tackles and a hurry.

Senior linebacker Tristan Royce also had seven tackles, including two solo, a 10-yard sack and a hurry. Junior linebacker Will McCleary (4 tackles) and Terrell (5 tackles) each had big sacks as well, of 10 and 12 yards, respectively.

“Terrell was his usual great self bringing the pressure, and Will did a good job with that too,” Larson added. “Although he gave up that one long score, I thought Nathan Anderegg did a greatjob of shutting down Kaufusi for the rest of the game.” He had five tackles (3 solo) and two deflections.

“They’re the Bishop Gorman for Utah County,” Larson said. “We’ve got to worry only about ourselves, and I hope we learned from our Corner Canyon experience. It’s going to depend on how we come out to play and how well we do what we do.

“They have the biggest offensive line in the state and their quarterback is much better than last year,” he said. “However, I like how our guys are playing really well right now.

“We’re going to have to contain at the line of scrimmage; we’vegot to have pass protection and be able to run the ball. It’s not so much about the big plays this week but we’re going to have toconsistently get those three-, four- and five-yard gains to have a chance. It’s time to execute it,” the coach concluded.