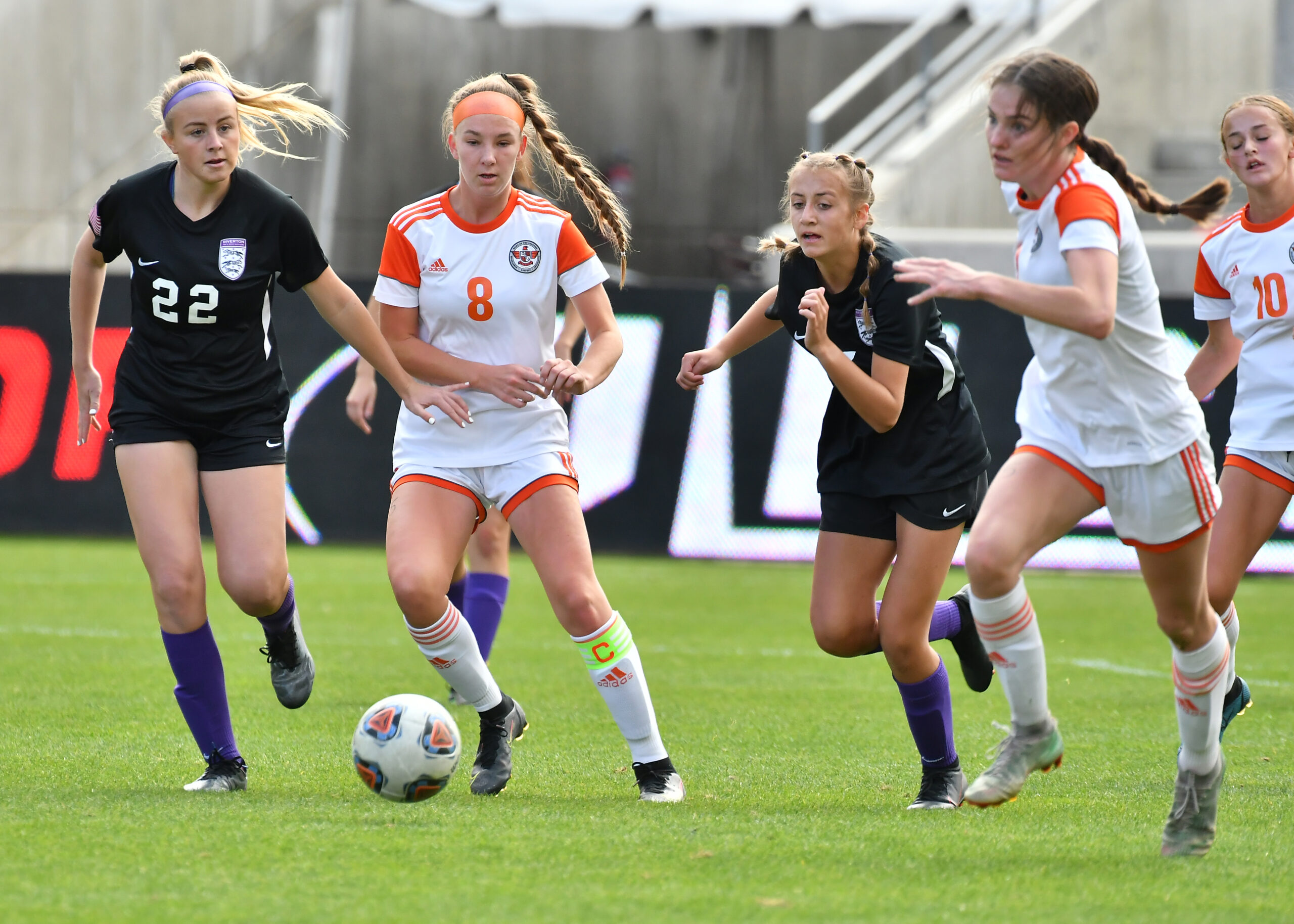 The #5 Skyridge girls soccer team played well in an outstanding match for the 6A championship on Friday (Oct. 22), but had to settle for second place after falling to #2 Riverton 3-1.

The Falcons were forced to play catch-up almost from the outset as the Silverwolves were awarded a penalty kick in the second minute of the contest after an inadvertent hand ball violation inside the penalty box.

The shot hit the bar and bounced straight down, giving sophomore goalkeeper Emalynn Levingston no chance to make a play on it and just like that, Riverton had a 1-0 advantage.

To their credit, the Skyridge players didn’t panic after this unlucky start. Their spacing and passing were solid throughout the half, but much of it was played on the Falcon side of the center line. What shot opportunities they did get were fielded by the Riverton goalie or went wide of the mark.

With 15 minutes left in the period, the Silverwolves scored again on a rocket from the right side. Levingston charged the ball but it landed beyond her and bounced into the empty net. The 2-0 margin held up to the break.

The second period was a different story. The Falcons shot early and often and kept the ball on the attacking side for most of the rest of the contest.

Seven minutes into the half, junior forward Kylie Olsen centered the ball in front of the Riverton net and senior midfielder Emily Auman headed it into the right side to cut the deficit in half.

Skyridge continued to keep the pressure on and the girls took several more hits in close order, but they couldn’t find the target.

On the back side, the Falcons were playing without the two center backs who had been their anchors all season. Senior Kylie Phillips blew out her ACL in the previous game and senior Alexa Balls was unavailable because of a hamstring issue.

The girls who stepped in for them did a notable job, but that’s a tough position to be thrown into for a championship game.

Skyridge Coach Toby Peterson elected to push his entire team up towards the end of the contest to try to get an equalizer, and that ended up costing them as Riverton used a good relay in front of the net to score again with three minutes remaining to complete the tally for the match.

Peterson still had plenty of praise for his players. “There was a lot of drama with this team at the start of the season with the coaching change and other things,” he said. “We asked the girls to set aside those things if they wanted to see success and they were able to do that.

“They came together as friends,” he continued. “When they fell short, they came back strong and played better the next game.”

The squad had 10 seniors; not all of them were starters, but they all played a pivotal role in how things turned out this year.

“Whether they were a starter or a support player, they each gave their best effort,” Peterson said. “We told them we wanted to build a team culture in this new era. I could make some suggestion about what that should be, but ultimately it was up to them.

“From the very beginning of the summer, the seniors were there to show the way,” the coach continued. They set an example of discipline, heart and determination which the younger players tried to emulate.”

Peterson noted that his team got off to sluggish start, but that all changed after the break. “The second half was a totally different story,” he said. “We were possessing the way we wanted to, and we were attacking. The early goal we got gave us the confidence that we could still do it.”

Even though the end result wasn’t what they hoped for, the coach said his younger players have a lot to look forward to. “We’ve got a lot of girls who are ready to step up. With the fire they developed today, we expect another great season next year,” he concluded.