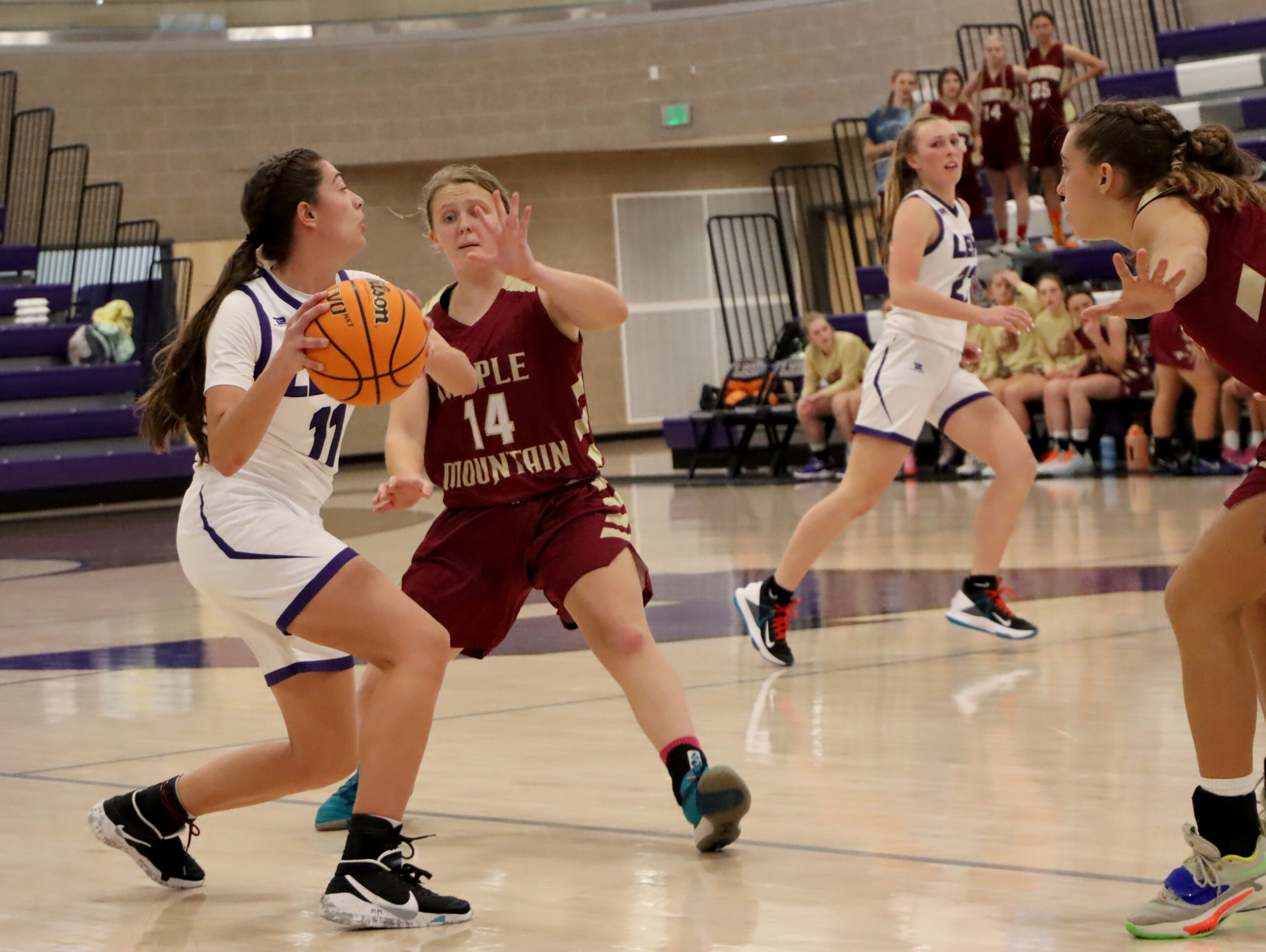 “We knew we had a tough week ahead of us,” said Lehi Coach Sean Seastrand. “To start the week, we were looking at threeroad games in four days and all three of them against solid, well-coached teams.”

The Pioneers were never able to create much separation with the Redhawks in a see-saw, low-scoring battle. The teams were tied at 21 going into the break, and a five-point scoring edge in the third quarter plus some smart basketball at the end were enough to secure the victory.

Senior wing Jamisyn Heaton was on fire, shooting a high percentage at every level to finish with 18 points along with seven rebounds, three assists, three steals and three deflections.

“We struggled to shoot the ball against Bountiful and they defended us well,” Seastrand said. “It was a fun, tight game and we made a few big plays down the stretch to pull it out.”

The game against the Eagles started similarly, with the teams dueling 10-10 through the first quarter. However, a five-point edge in the second period and an 11-point margin in the third added up to a comfortable win.

“The next night, Skyline gave us a totally different look with two of the best posts in 5A,” the coach said. “We’re a little smaller, so it was a joint effort to play tough in the paint and rebound. We started to hit shots in the second half and found a good rhythm on offense that helped us pull away late.”

The Pioneers bombarded the Skyhawks from the start, leading 17-10 at the end of the first quarter and 30-19 at the break. However, a 34-6 barrage in the third period put the game out of reach for the hosts.

“Salem Hills is a really good team and to be honest I was a bit speechless afterwards on this one,” Seastrand said. “Our depth really showed tonight as every single player was just playing so well on both ends.

“That third-quarter avalanche made me feel like I was watching the Golden State Warriors,” he added. “Sometimes the shots are just falling.”

Sophomore guard Addy Scrivner ended up as the leading scorer with 17 points along with three assists. Wall went 7-of-9 (78%) from the field for 16 points and also grabbed six rebounds withthree assists and four steals. Heaton added 15 points with five boards, five steals and three deflections.

“All three games we had great game plans, and once again I’ve got to give a huge shoutout to my varsity assistants,” Seastrand said. “Kassidy Larsen scouted Bountiful, Aimee Dorais scouted Skyline and QiSean Rust scouted Salem Hills. Their scout and game plan for each team was perfect and the girls executed.

“What this week showed us though is that as a team, we’re capable of big games when shots fall, but we can find ways to win when they’re not falling as well, against different teams with different styles of play,” he went on.

“Going 3-0 on the road in four days is something these girls should really be proud of,” the coach added. “They’re unselfish, they’re fast, and they’re all bought in. It’s so fun to coach them.”

Lehi is scheduled to compete at the East Idaho Holiday Shootout Dec. 28-30.