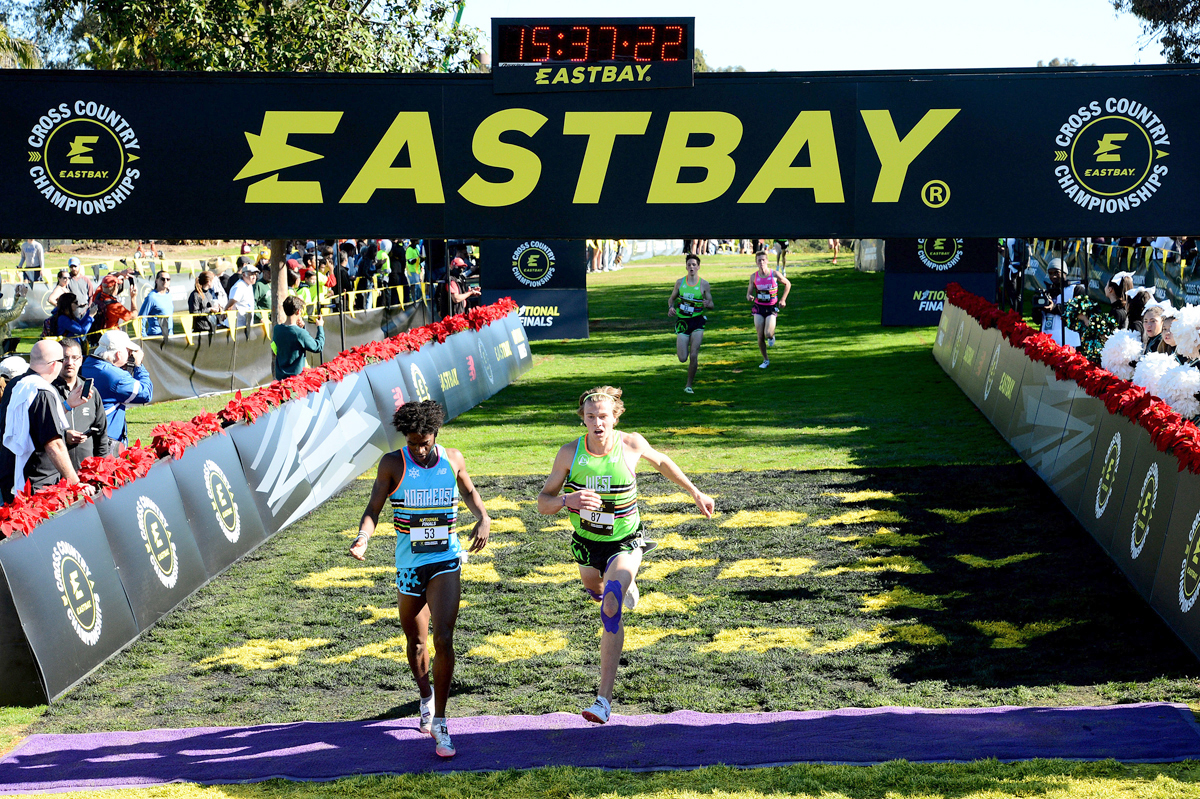 He had also received offers from Utah Valley, Weber State, Utah State, Southern Utah and Utah Tech. The University of Utah no longer has a men’s cross-country team, so all of the state’s Division I programs were vying for his services.

After winning the state 5A individual title, McMullin went on to finish seventh at the West Regionals in Walnut, Calif. on Dec. 4 and placed 18th at the Eastbay (formerly called Foot Locker) Cross Country National Championships in San Diego on Dec. 11.

At the West Regionals, he was among the eight runners who broke the course record of 15:21 at Mt. San Antonio College, the host venue. He clocked a time of 15:17 in the event.

“Our first mile was a 4:31, which is really fast,” McMullin said. “I was hoping to stay in the top three; I thought that was thesafest place for me to make the top 10 in order to qualify to advance to Nationals.

“I stayed in the front group for the first 1 ½ miles but fell into the second pack after that,” he continued. “That course has a lot of hills in the second portion, and I had to be mentally stronger for this one over other races. There’s a long climb in the last three-quarters of a mile and I had to stay strong through it.”

The conditions on race day weren’t ideal. McMullin said it was so smoggy he couldn’t see much of the course, but he added that running in Utah during winter inversions had helped him to get used to conditions like that.

“I wanted to finish a little higher, but I got the job done,” he said. “It was great to race against people I had never met before, which made this a different experience than running in Utah where I know all of my competitors so well.”

McMullin had a packed week in between these races. He spent the first two days on his official visit to BYU but still had to do his pre-race training as well.

“I did my speed work on Tuesday and reduced my mileage overall to keep my legs fresh,” he said. He went to San Diego on Wednesday. “Thursday and Friday, all I did was hang out with the guys on the West team and try to enjoy the moment.

“I wanted to enjoy being there because I had worked so hard to get to that point and wanted to appreciate the whole experience,” he said. “It was almost like being sponsored.”

Race participants had all their expenses paid, including travel. They stayed at a historic, famous hotel, ate “amazing” food, and received lots of gear from the company sponsor.

“It was one of the funnest weekends of my life,” McMullin said.“It was great to be with elite athletes from all over who will be competing in college. I was super happy to go and participate.”

He said he purposely didn’t think about the race itself until Friday night and waited until Saturday morning to start his mental preparation.

“When it comes down to it, cross country is 75 percent mental and 25 percent physical,” McMullin said. “This year I was focused on developing a versatile and strong mentality, so I could be prepared to face a lot of different circumstances. Thishelped me to grow as a runner.”

He described race conditions as being “absolutely perfect.” It was 65 degrees and partly cloudy. “The grass was soft; the dirt was hard but soft enough for my spikes,” McMullin said.

He added that the atmosphere along the course was electric, and he enjoyed the encouragement of the spectators. “Two of the guys on the West team were from San Diego so there were extra people there cheering for the West team,” he said.

However, McMullin’s entire family drove down to be on handand his high school coach, Christ Dorton, was present as well. “They were the only spectators I need,” he said.

McMullin explained that he was shooting for the top 15, since that group earns the coveted All-American designation. “I ranthe first mile and a half conservatively and kept reminding myself that the All-American pack was ahead of me,” he said.

Ultimately, he wasn’t able to catch that group and finished just a second and a half behind the cutoff. “It taught me a valuable lesson about the start of a race,” McMullin said. Being hard on himself, he said it took him quite a few hours to recognize how well he actually did.

“To finish 18th in a national race is really good,” he said. “Now I’m super happy about it and proud of all the work I’ve put in and the improvements I’ve made to get me to this point. I also want to give a shout out to my teammate, Tyer Martin, for pushing me all season and helping me to get here.”

With his high school cross country career now completed, McMullin plans to continue his development by running indoor and outdoor distance events with the track team.