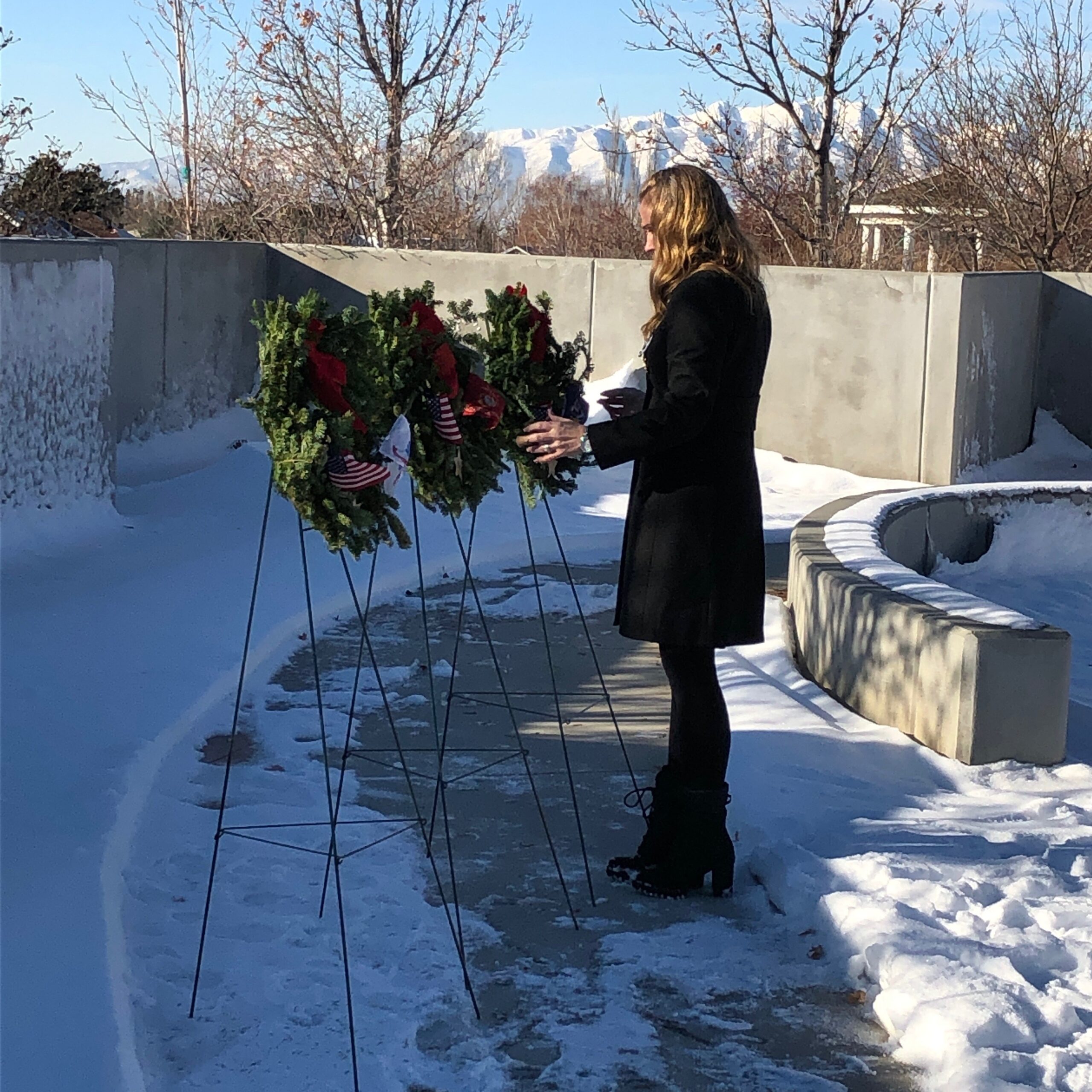 The Utah State Society Daughters of the American Revolution obtained a Declaration from Governor Spencer Cox, declaring December 18, 2021, to be Wreaths Across America Day in Utah.In Highland, the official WAA Ceremony began with an invocation given by a child named Swede, Chaplain of the Wasatch Range Chapter, Utah State Society Children of the American Revolution (“CAR”). Swede, only eight years old, but willing to accept responsibilities in the CAR, recited a prayer offered by the Father of our Nation, George Washington. After the invocation, Heather Bullock gave a brief introduction of Wreaths Across America and noted that those gathered were joining Americans at more than 2,700 cemeteries across the nation.

Beginning at 10 a.m., the ceremonies are timed to coincide with the Wreaths Across America ceremony in Arlington, which begins at 12:00 p.m. EST. A wreath to thank and acknowledge all those who are serving and who have served in each branch of the military was then placed, with one final wreath to honor of the 93,129 United States Servicemen from all branches of the service whose last known status was either Prisoners of War or Missing in Action. These individuals have never returned to their families and homes. A pledge was made that a grateful nation shall not forget. A more permanent marker to remember those “Known but to God” was then acknowledged, as a Never Forget Garden Marker was dedicated.

Commissioned by the Society of the Honor Guard, Tomb of the Unknown Soldier as a part of the commemoration effort to acknowledge the 100th Anniversary of the dedication of the Tomb of the Unknown, the Wasatch Range Chapter DAR purchased the Never Forget Garden Marker and donated it to the City of Highland. Highland City placed the marker and will plant white roses around it (as the white rose is the official flower of the Tomb of the Unknown Soldier). In the dedicatory prayer, Wasatch Range Chapter Regent Kelly N. Schaeffer-Bullock supplicated the Almighty that the Garden Marker would assist all who pass by to recall “our sacred obligation to remember,” and that the sacred obligation “will be seared into our hearts and minds, and be manifested each and every day, in each and every choice we make, until, as Goethe said, “What we [have] interit[ed] from [our] father[s]” shall have been “earned”, so as it make it our own1 . Thus, we shall become “a Republic worthy of” both “defender’s living and defender’s dead”, and that we each do our own “part … to atone for the losses of the heroic dead by making a better Republic for the living.”

The ceremony ended with remarks given by Phil Wasden (U.S.A.F, Ret), himself a veteran and currently serving as Chaplain for the Lehi City Fire Department. Mr. Wasden was able to recall his recent attendance at his granddaughter’s graduation from Lackland Air Force. Mr. Wasden graduated from Lackland over forty years ago, and his son graduated from Lackland twenty-five years ago. The Wasden family is an example of families across the country for whom love of country more than self seems to a characteristic passed on in the genetic code, and to whom a grateful nation can never adequately acknowledge our debt.

At a time when so many are busy planning delightful family gatherings and purchasing gifts to be given in brightly colored packages, too many of our nation’s citizens forget about all the families that will have an empty chair at their table during the holidays – those empty chairs the price of our peaceful and free holiday season.

In attendance at the Wreaths Across America ceremony were members of the Alpine City Youth Council. Jen Bohn, who coordinated the Youth Council members attendance, remarked on how little an act it was, but so deeply meaningful, to devote a Saturday morning, in the snow and cold, to honor those who sacrificed so much more for us. It is hoped more community members will take a moment next year to attend a Wreaths Across America ceremony at a local cemetery to honor and remember those whose gift to their nation – liberty – is one we enjoy every day.