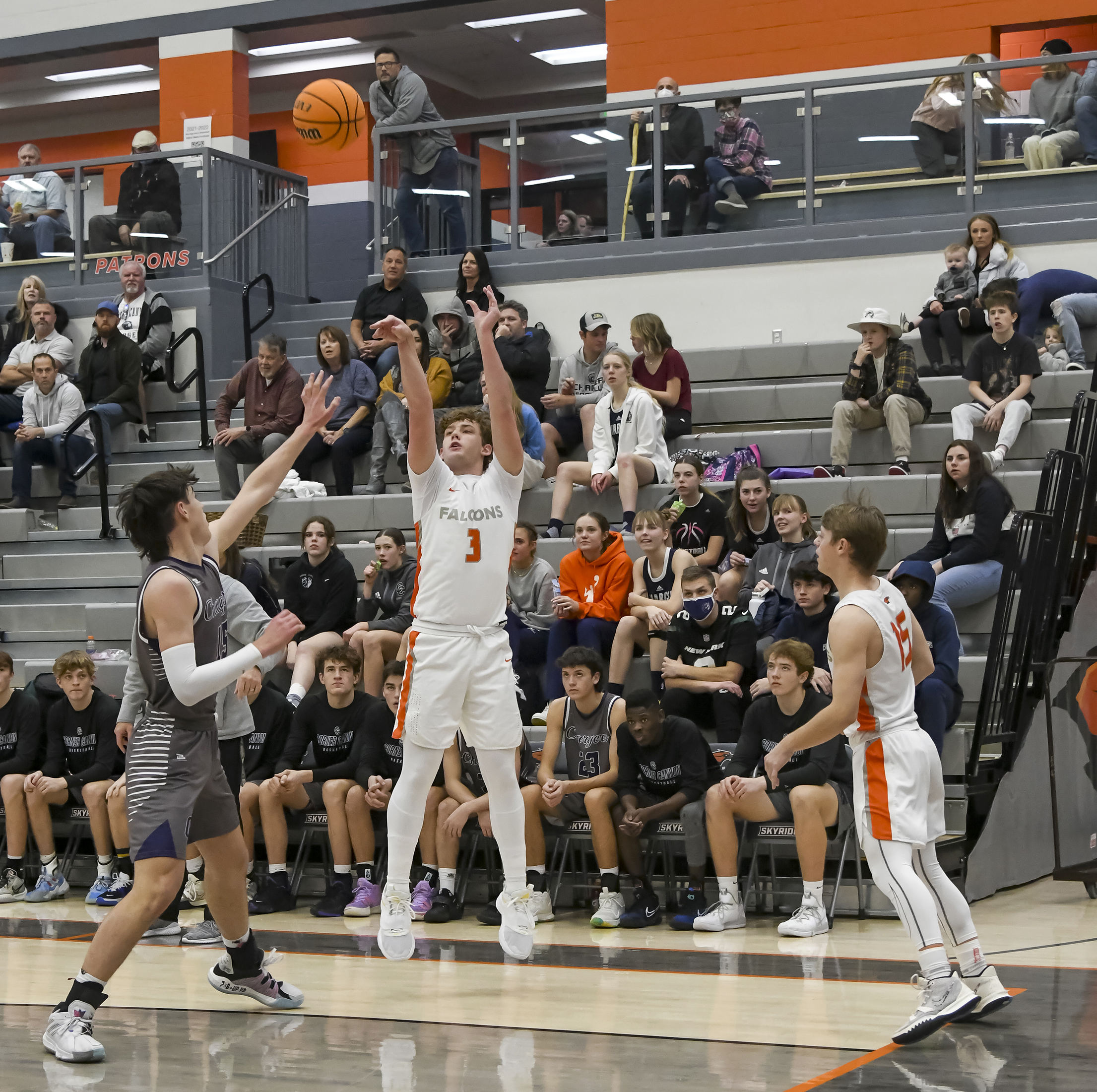 The Skyridge boys basketball team won two more league games last week to remain undefeated and were alone in first place heading into the final first-round game Tuesday against Pleasant Grove. The team was 12-2 overall to that point. That contest was played after press time.

In a game which featured wild swings in momentum, the Falcons rode a big second-quarter margin to the eventual victory, a big rivalry win for Skyridge on the road.

The teams played toe-to-toe through the first quarter, which ended with the Falcons up 11-10. However, the offense got cooking in the second period and Skyridge posted a 34-22 advantage at the break.

The Knights returned from the locker room with fresh vigor and outscored the visitors in the remaining two quarters, but they were unable to overcome the halftime deficit.

The Falcons earned a statement win by taking the Chargers to the woodshed led by the superb defense of Davis and Bailey.

Skyridge had a double-digit lead 19-9 by the end of the first quarter and maintained it for most of the rest of the game. They outpaced the visitors 21-8 in the final stanza to make a rugged game look easy.

Holland led the way with 19 points including 10 at the charity stripe and also had five rebounds, seven assists and two steals. Carter tallied 17 points including three triples along with nine boards.

Snoddy also had a trio of treys among his 12 points, and he dished out three assists as well. Bailey netted 10 points with five rebounds and four assists, while Davis grabbed four boards. The team had 17 assists on 21 field goals.

“Our defense was really in sync tonight and we came out in the first quarter and held them to nine points,” said Skyridge Head Coach Jeff Gardner. “We were really efficient offensively. We shot 67 percent from the field and just did a good job with sharing the ball.”

Davis held Corner Canyon star Max Toombs to 10 points, half his normal total, with his physical and aggressive defense. Bailey’s active play in the paint impeded Corner Canyon’s shooters with his long reach.

Gardner said, “Josh Davis’s defense tonight on Max Toombs,who is one of the top scorers in the state, was just awesome. He came in and played really tough.

“Bryson Bailey was tough at the rim and Colby Carter had some big plays for us,” the coach added. “Nick Holland also played well. These guys just do a good job as a team.”

The Falcons will next host Juan Diego on Monday (Jan. 31) withvarsity tipoff set for 7 p.m.