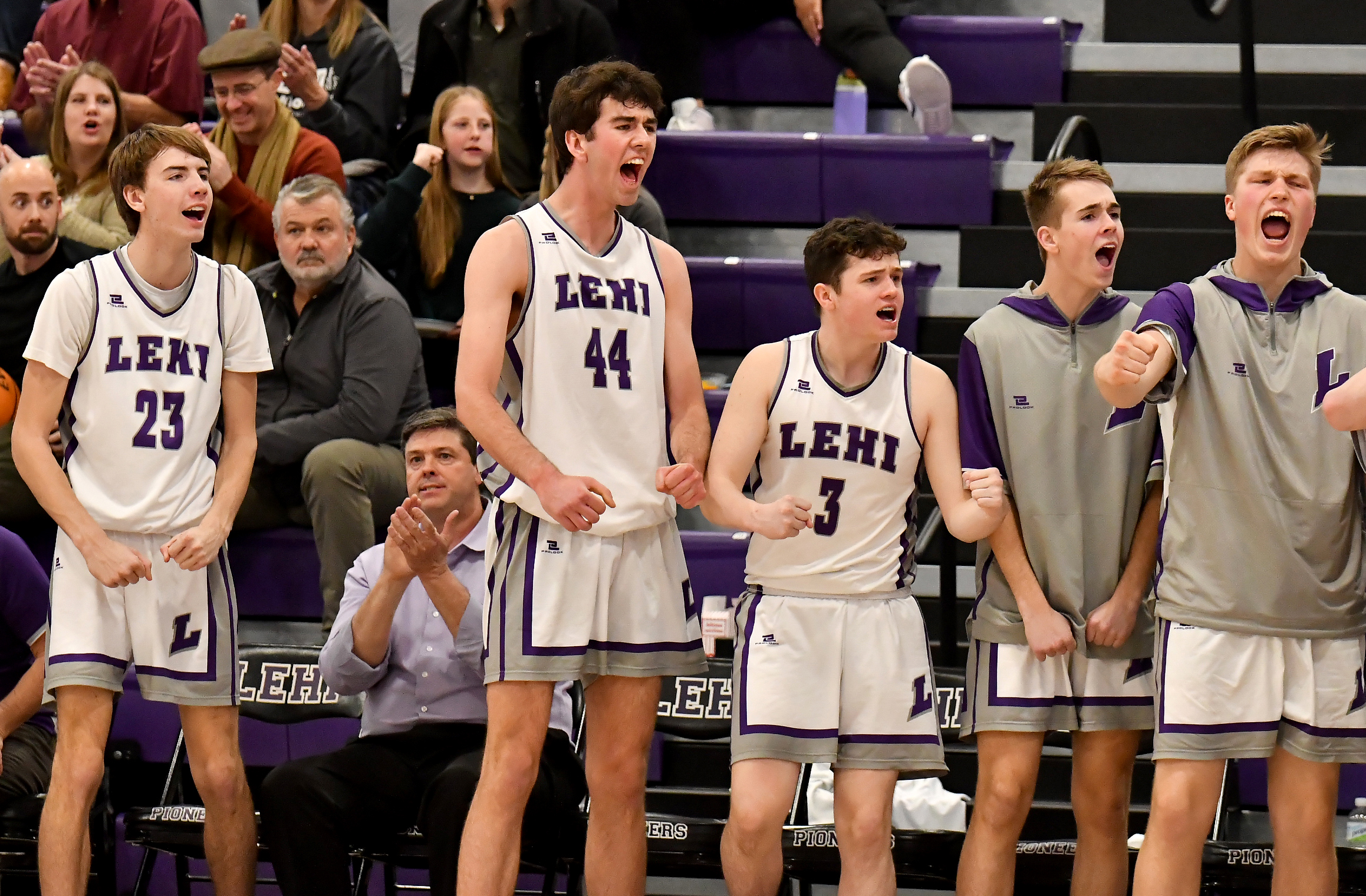 The Lehi boys basketball team managed an impressive one-point victory at Timpview and followed that by overwhelming Timpanogos in the fourth quarter to win both critical Region 8 contests last week.

The Pioneers maintained a steady effort at the Thunderdome through the first half of the contest. Neither team led by more than a few points and Lehi had the advantage 25-22 going into the break.

The squads dueled even through the defensive, low-scoring third period, and the Pioneers were up by two or three buckets most of the fourth. However, the Thunder sank a trey with 20 seconds left to take over the lead by one point.

The visitors worked to get the ball to sophomore forward Grayson Brousseau on the low block, and he hit a turnaround jumper with three seconds left to close out the big road win for his team.

Junior guard Braxton Hawkins added eight points, six rebounds and four assists, while Brousseau finished with six points and three boards. Junior guard Spencer Anderson tallied five assists. The team had an assist on every field goal and was a perfect 10-of-10 at the line to aid the victory.

“Nixon had a major impact on both the offensive and defensive ends of the floor, and that was great to see,” said Lehi Coach Quincy Lewis. “Braxton had his best all-around game of the season, helping us with scoring, rebounding and good defense.

“I thought Cooper really carried us offensively through the first half and he gave us a nice floor game overall,” the coach continued. “We got the ball where we wanted it at the end of the game and Grayson made a tough shot to win it.”

The Pioneers came out hot and ramped it up even further in the late going, shooting 59 percent from the floor for the evening and 61.5 percent from beyond the arc. They netted 34 points in the final period to turn a single-digit margin into a blowout victory.

Lehi led 14-11 after the first quarter and extended the advantage to 30-10 by halftime. The Timberwolves fought hard in the third quarter and got the deficit down to six, but Lewis responded with five consecutive points to extend the lead again.

Timpanogos was behind by nine entering the fourth but then the Pioneer offense exploded to outscore the visitors by 20 down the stretch. The 34 points tallied in the final stanza ties for second on Lehi’s all-time program records list.

Hawkins had a breakout game, going 7-of-11 (64%) from the field including a pair of treys and was also 6-of-7 (86%) at the line for 22 points along with four rebounds and three assists. He scored half his total in the final period.

“We got out in transition, we got stops and we outletted the ball,” Coach Lewis said. “Braxton and Spencer seemed to be the guys going downhill at the end. Both of them just attacked the rim the entire fourth quarter.

“It was really exciting to see Braxton break out for a big game offensively and it was great to have such good balance in our scoring with contributions all the way down the roster,” the coach added. “We’re starting to show signs of what we’re capable of offensively.”

The Pioneers have won their last three games and finished the first round of region play with a 4-2 record, moving them into a tie for third place with Alta. Lehi welcomes the Hawks tomorrow (Jan. 28) at 7 p.m. to open the second round.