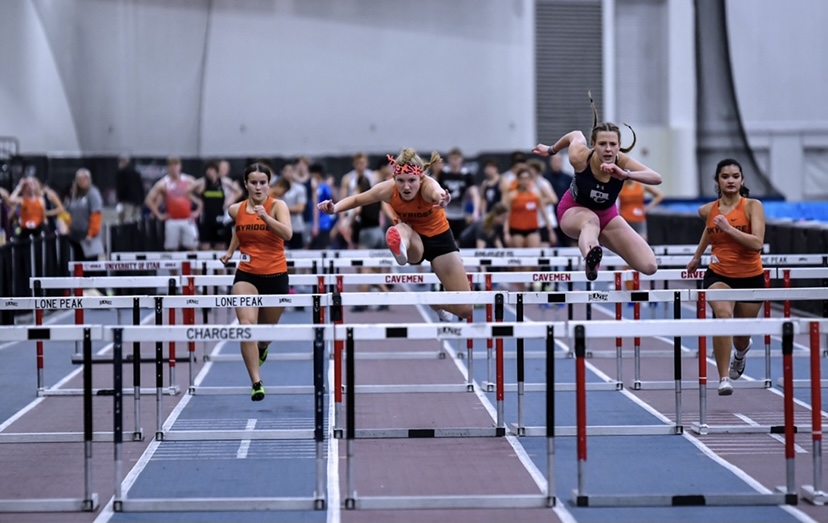 Lehi-area track athletes continued their preparation for the upcoming spring season at four indoor meets during the past three weeks.

At the Idaho State Stacy Dragila Invitational on Jan. 28, Pioneer junior Sarah Ballard won the girls 60-meter race in 7.75 seconds and earned silver in the long jump at 16-10.36 feet. Lehi junior Caroline Moon captured gold in the 800-meter race at 2:19.33.

The Olympic Oval in Kearns was the venue for the West Hurdle Trials on Feb. 3, the Utah Distance Challenge on Feb. 4, and the Utah High School Track Coaches Association (UHSTCA) Indoor Championship this past weekend (Feb. 11-12).

Ballard continued to pile up the medals in all of these events. She took the gold twice more in the 60m; last weekend’s mark of 7.63 seconds was the 10th fastest time in the nation this season for a junior girl. She got silver in the 200-meter event at 24.61 seconds, sixth fastest time nationally in her bracket.

She also won the 400-meter race at the Distance Challenge in 57.55 seconds, where Moon finished sixth in that event but earned the gold in the 800-meter race at 2:18.46. Ballard got bronze in the long jump at UHSTCA.

In the Hurdle Trials, Pioneer seniors Ben Johansen and Eli Earl finished in sixth and seventh place, respectively, in the 60-meter hurdles boys event. Senior Jefferson McMullin earned bronze medals in the 3200-meter run at the Distance Challenge and the 800m at UHSTCA.

Also at the latter meet, Johansen came in fifth in the 60m hurdles and seventh in the 400m, while senior Tyler Martin was fourth in the 3200m.

Skyridge was also well represented at the Utah events. At the Hurdle Trials, Falcon junior Smith Snowden earned gold in the 60m in 6.87 seconds, seventh-fastest time nationally for a junior boy.

Junior Annika Schavey captured bronze in the 200m at 26.99 seconds and was also sixth in the 60m while junior Bailey Kearns came in eighth. Junior Mia Kauffman was seventh in the 60m hurdles and junior Brady Beers was eighth in the 200m.

In the Distance Challenge, junior Halle Mehr was fourth in the 800m and junior Kylie Olsen was eighth in the 1600-meter event. At UHSTCA, Mehr got the gold in the 800m at 2:22.08, while seniorJacob Smart collected bronze in the 60m hurdles.

Senior Seth Wallgren was fourth in the 1600m and junior Miley Richards finished eighth in the pole vault.