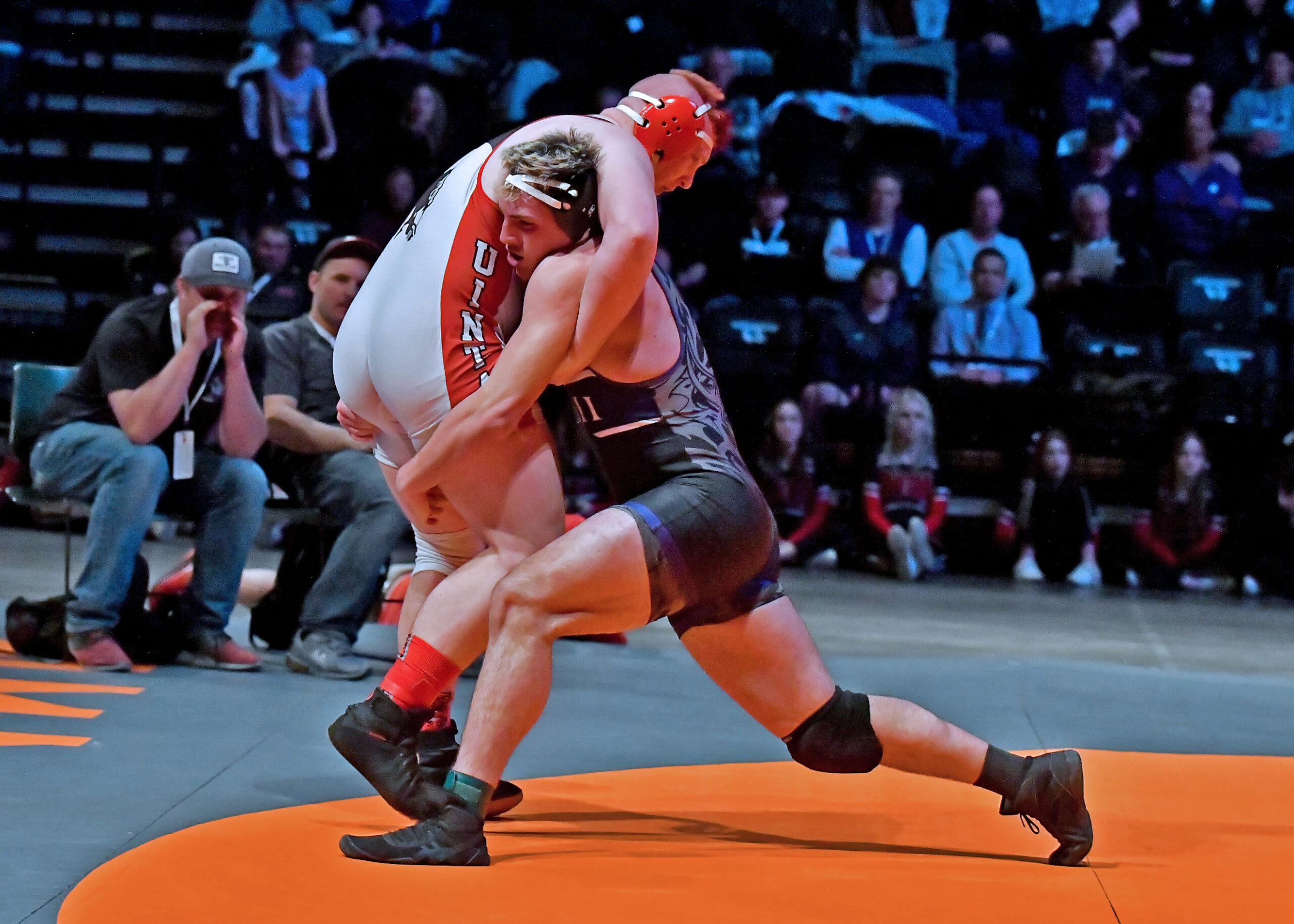 After finishing fifth at the state tournament last year, Pioneer junior Isaac Terrell capped off a 35-4 season by earning the 5A championship in the 285 weight class tonight (Feb. 17) at Utah Valley University’s UCCU Center.

Terrell’s accomplishment also helped lift his team to a fourth-place finish in a very tight race after the top three spots. Uintah was the overall winner with 276.5 points, followed by Payson at 265.0, Wasatch at 184.0 and Lehi at 93.0. Three other teams finished within 10 points of the Pioneers.

Four of Lehi’s 10 other state qualifiers also garnered medals at the meet. Junior Will McCleary claimed bronze in the 190 weight class, junior Cole Eldredge was fifth in the 175 weight class, Junior Danny Hoyal was sixth at 215 and junior Nathan Bulpitt was sixth at 285.

In the girls tournament, senior Ajah Rajvong finished fourth in the 145 weight class and her points alone earned Lehi a tie for 19th place out of 27 teams.

Terrell tallied 29 falls on his way to the title match including his three other state bouts, but he was not able to do that against Uintah’s Gage Howard (41-7). Instead, Terrell had to work for a 5-1 decision.

“The goal going into the match was to keep the score low,” said Coach Dan Rice. “His opponent is a good wrestler and atUintah, they know their stuff.

“We knew that he usually gassed out in the middle of the second round, so we wanted to keep it safe and keep it close and not do anything that would give him an opening,” the coach continued. “As it turned out, Isaac was able to show physical dominance throughout the match.”

McCleary (41-6) was the other Pioneer title hopeful. He scored pins in his first two matches but lost a one-point decision to Maple Mountain’s Andrew Jensen (41-8) 5-4 in the semifinal. He posted decisions over Alta’s Jace Beckstead 9-2 and Payson’s Chandler Loveless 7-4 to earn his final spot.

Eldredge was defeated by a late fall in the quarterfinal and had to work through four other matches to claim his place. In a thrilling finish, he pinned Stansbury’s Josh Olson at 5:56 to get his medal.

Hoyal lost by fall in his quarterfinal as well, so he had to work his way back through the bracket also. Uintah’s Jett Swain pinned him at 1:50 so he had to settle for sixth.

Bulpitt scored falls in his first two bouts but then had to face his teammate Terrell in the semifinal. He was defeated in a third-period fall by Wasatch’s Austin McNaughtan in the fifth-place match.

Here’s a summary for the other state competitors:• At 113, freshman Lincoln Rex won his first consolation match and contributed 2.0 points to the team total.• At 126, sophomore Parker Robinson added another point with a win by decision in Consolation Round 1.• At 144, sophomore Ammon Cannon won his first and third matches to tally 5.0 points towards the team total.• At 150, Brady Thomas, the state squad’s only senior, was eliminated after two rounds.• At 157, Hayden Johnson suffered the same fate.• At 190, sophomore Ty Russell also did not score.

For the girls, Rajvong lost in her semifinal to an undefeated Murray wrestler but registered a pin in her next match before Tooele’s Savannah Malmgren defeated her by fall at 1:14.Senior Haille Holmes also qualified for the tournament in the 125 weight class but did not score.

Overall, Rice was pleased with his team’s performance. “All year long we’ve been taking every competition step by step with the goal in mind to be at our best by state,” he said.

“They preseeded us as fourth in the rankings but not too long after that they dropped us out of the top 10, and that was perfect for my team,” Rice said. “I told the kids, ‘they don’t think we can do it and we’re going to finish fourth when we peak at state,’ and that’s what we did.

“This is a good group; they’re really hard workers, on the mat and in the weight room,” he continued. “I feel really good about next year. The hard part is going to be that their backups will have a tough time getting into the lineup. It’s going to be exciting.”

In the meantime, he’s going to take some time to savor the success of this season. It’s been six years since he had an individual champion, and this is the team’s second-highest finish since he’s been the coach.

“They did everything right,” Rice said. “They believed in their coaches and in their teammates, and they peaked at the right time.”