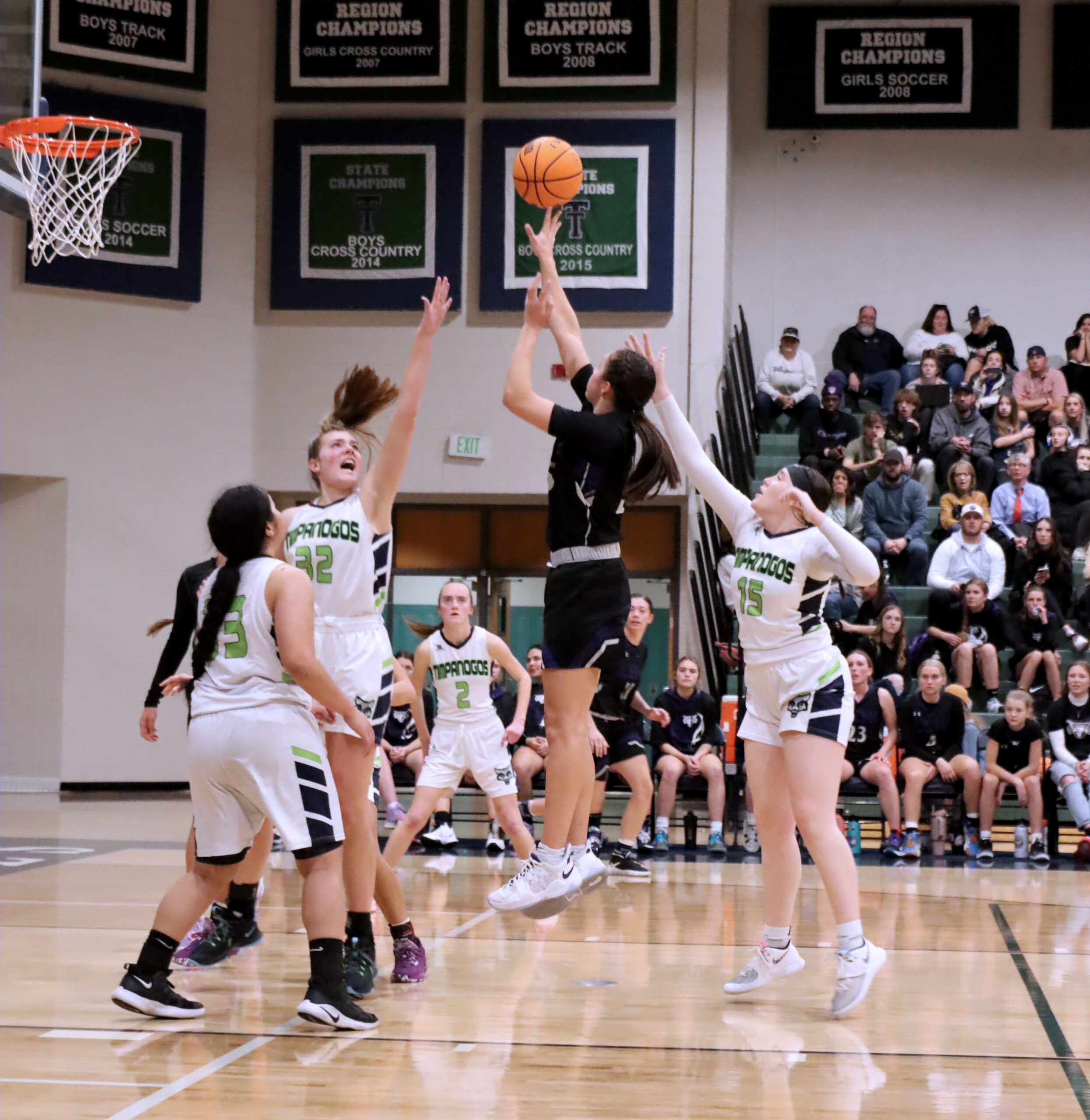 The Lehi girls basketball team completed their second-round sweep of region opponents by topping Timpanogos and Timpview on the road this week.

The win over the Thunderbirds also earned the Pioneers a shared Region 8 championship as both teams finished with a 10-2 league record. This was the fourth consecutive league title for Lehi. The Pioneers are 19-4 overall for the regular season.

The second quarter was the difference-maker in this lively contest as the Pioneers held the home school to just two points while scoring 10. They also outscored the Timberwolves in each of the other three periods by slim margins to add up to the final comfortable spread.

Lehi led 14-9 at the end of the initial quarter but widened the advantage to 24-11 by the break. In the second half the scoring margin of 33-28 added to the earlier gap secured the victory.

Senior wing Maci Wall had one of her best games of the season. She shot 7-of-9 (78%) from short distance and finished with 18 points along with six rebounds, three assists, two steals and twodeflections.

“The story of this game was our defense,” said Lehi Coach Sean Seastrand. “We started out really strong, only allowing 11 first-half points. That got us in good shape moving forward into the second half.

“Their guard Summer is a great player and Katie is a great shooter, so they’re a tough matchup, and they made a couple of runs in the second half,” he continued. “However, I was proud of how our girls responded each time with a run of our own to keep the lead in double figures for the big road win.”

Seastrand added, “We also played really great team basketball. We had 19 assists (on 23 field goals) and 12 turnovers, which is a great sign for our team. That’s how we want to play.”

The battle for the region title came down to the second quarter, and as in the previous game, the Pioneers prevailed. The teams tied at 13 apiece after the initial period, but Lehi clamped down after that and led 23-17 at the break.

The scoring went back and forth in spurts during the second half, but both teams ended up scoring 21 points so the difference in the final score was the six-point margin from earlier in the contest. The Thunderbirds had won the earlier meeting by 13 points at Lehi.

Wall again set the pace with 17 points and collected 10 rebounds to post a double-double. Heaton added 15 points, six boards, four assists, a block and two deflections, while Smithcontributed eight rebounds. Love made five assists and the team overall had 14 on 18 field goals.

“First of all, a huge shoutout to our student section,” Seastrand said. “They showed up on the road and were loud! They were awesome. That felt like a playoff game. Two heavyweights, region rivals, battling on every single possession.

“Fortunately, we got some stops down the stretch and Maci hit clutch free throws and we pulled away with the win,” the coach said. “I’m so proud of this team. That game seals four region championships in a row. What an accomplishment for these girls and this program.”

The Pioneers will start the state tournament on Tuesday (Feb. 22). Check back online Saturday to find out who the opponent will be