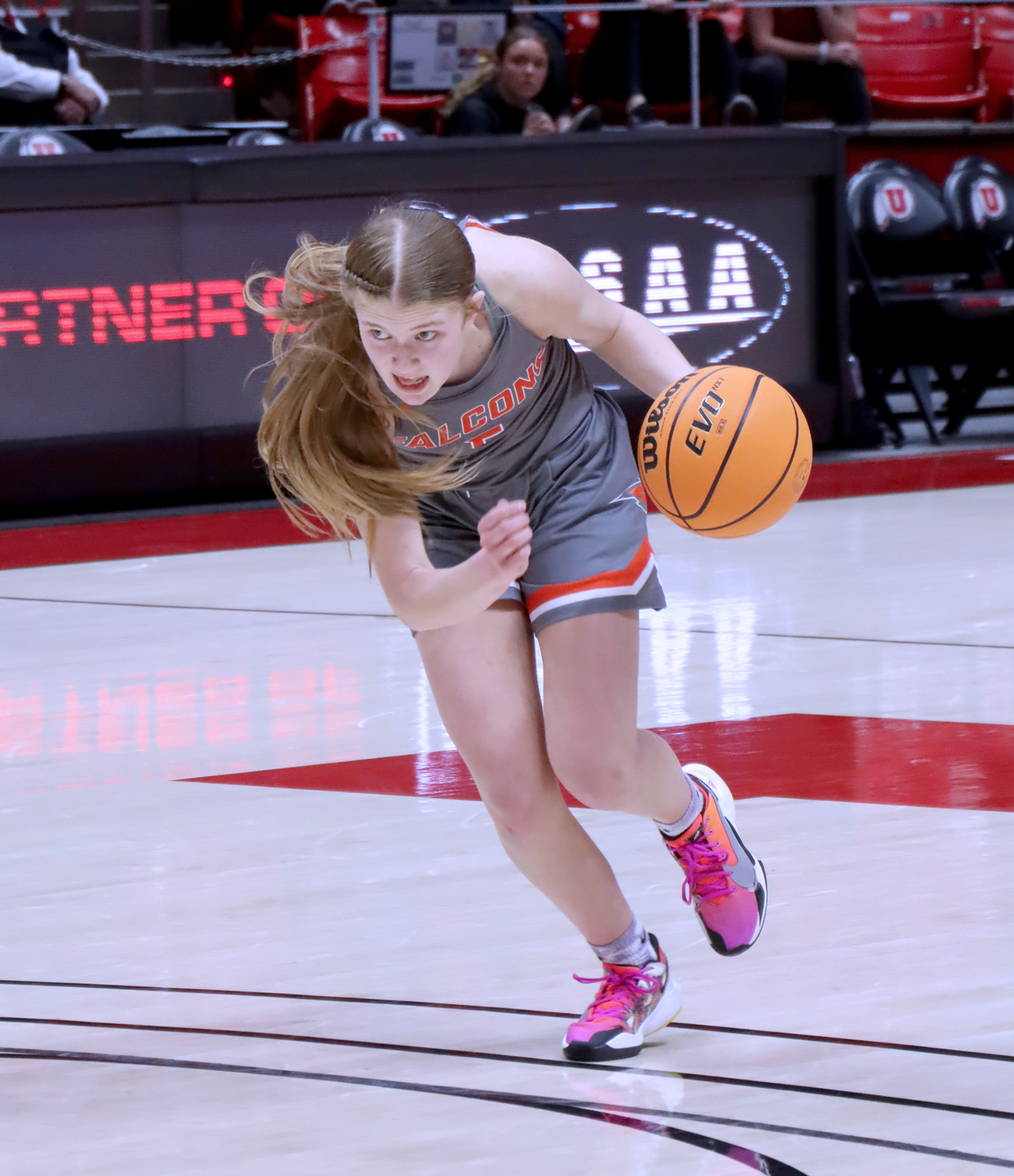 The Skyridge girls basketball team put up a good fight against #1 Lone Peak during the quarterfinal round of the 6A state tournament on Tuesday evening (Mar. 1), but in the end the Knights pulled away for a 50-39 win.

Things didn’t start out well for the Falcons. They were unable to score until freshman guard Bella Sika netted a layup just before the buzzer to end the first quarter. Lone Peak was then up 11-2.

Undaunted, the Skyridge players began to work their way back into the contest with a free throw by senior guard KJ Gotbergfollowed by a triple from Sika off a pass from senior guard Teagan Gray.

The Knights then extended the lead again, but the Falcons responded with a trey from junior guard Abby Hymas, a steal and fast-break score by sophomore guard Cambree Blackham, a bucket from sophomore guard Shae Toole and a baseline drive to the hoop by Sika.

Blackham swatted the ball away on Lone Peak’s final attempt of the half and the Knights had to settle for a 22-16 advantage going to the locker room.

Lone Peak pushed the margin to double digits three minutes into the second half, only to see it whittled down to just two points at 30-28 when Blackham scored the final basket of the third quarter.

Sika then drew Skyridge even with an inside shot from a Toole pass. The Knights hit two free throws, but Blackham countered with a curling drive to the basket to tie the score again at 32-all.

However, Lone Peak managed the clock well and hit their free throws down the stretch to come away with the victory.

“It’s tough to start out down 11-2 but I was so proud of the way our girls fought back,” said Skyridge Coach Shaylee Nielsen. “They kept at it one possession at a time and gave themselves a chance to win late.

“As always, our defense was so tough and we did a good job limiting their big scorers but we didn’t score down the stretch in some crucial moments,” she continued. “We missed nine free throws and if you make a few more of those it might be a different game.

“Lone peak is a great team and they hit free throws and made the plays at the end to pull it out,” Nielsen said.

“I couldn’t be more proud of this group of kids. They play extremely hard and empty the tank every single night,” the coach added. “We’re so grateful for our seniors and we will really miss them and we’re just excited for the future and to get back to work.”