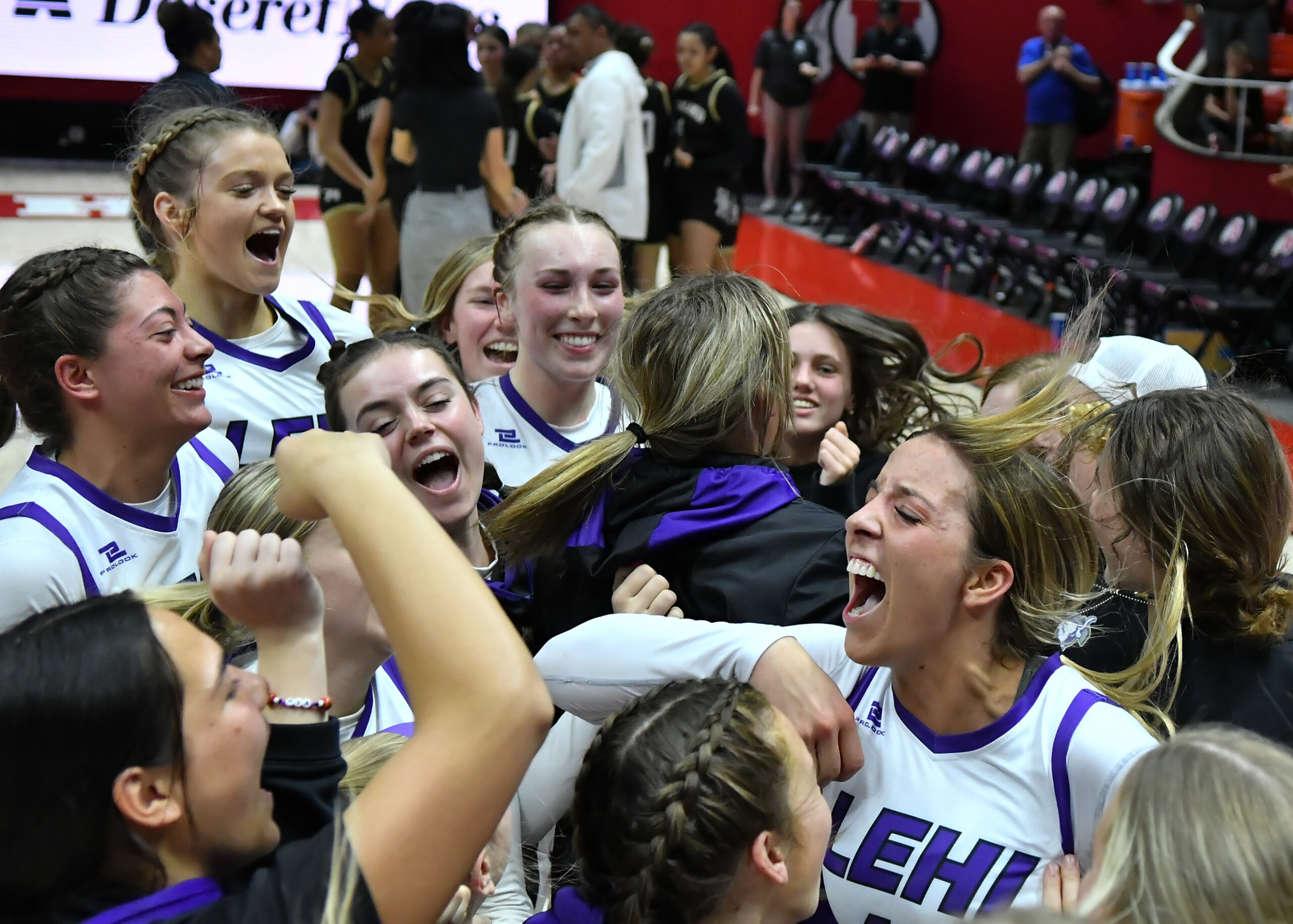 The Lehi girls basketball team led from start to finish in the semifinals of the 5A state tournament on Wednesday (Mar. 1), outrunning and outmuscling a physical Highland team 49-38 to earn a berth in the championship game on Saturday.

The Pioneers quickly posted the first two scores of the contest as senior wing Jamisyn Heaton got an inside bucket andsophomore guard Sammi Love fed senior wing Tara Smith for a 3-pointer in the first two minutes.

Lehi led the defending state champion Rams 9-3 at the end of the initial quarter with all of Highland’s points coming at the free-throw line.

The Rams pulled within one basket early in the second period,but senior guard Savannah Jones came off the bench and contributed seven points while the defense was focusing on her teammates to help the Pioneers to a 27-17 advantage at the half.

In the third, Heaton sank two consecutive treys to expand the margin to 14 points early on, but then Lehi’s shooting hit a cold stretch when nothing seemed to be going down and Highland mounted a run to cut the deficit in half heading into the final stanza.

Sophomore guard Addy Scrivner responded with a pair of charity shots followed by a triple after a Heaton steal to push the gap back to 12 points.

However, Highland wasn’t done quite yet. The Rams made a frantic effort and pulled within five points with 2:10 to play, but the Pioneers managed the clock well and made their free throws down the stretch to close out the victory.

Lehi had been eliminated in the semifinal round in each of the past three state tournaments.

“It feels so good for this group to get past the mental hurdle of the semifinal,” said Lehi Coach Sean Seastrand. “Taking on the next challenge, that’s part of who they are.

“I thought we did a good job of matching Highland’s physicality,” the coach continued. “We were at a disadvantage in height and size, and they do so well with offensive rebounding, but the girls played so tough that we were able to neutralize most of that.”

Seastrand noted that even a 10-point lead isn’t comfortable in a game like this, and he wasn’t surprised by Highland’s runs. “They had nothing to lose, so they launched a full-on attack,” the coach said.

“I thought our girls did a great job of staying poised and handling the ball down the stretch. We also made our free throws when it counted the most.”

Heaton finished with 14 points, seven rebounds, four assists and a block to lead the charge for the Pioneers. Wall added 10 points, eight boards and two blocks, while Smith scored nine with seven rebounds and three steals.

“This wasn’t a normal offensive night for Maci, but she still made her contributions,” Seastrand said. “That’s what good players do. She still showed her speed, leadership and athleticism which we have come to count on from her.

“I can’t say enough about Savannah,” the coach went on. “She came in when we had to deal with a little foul trouble and goes 3-for-3. She plays at every position for us, wherever we need her, and does all the little things.

“I’m proud of her for being so ready to come in and have an impact, even though it won’t always show in the stats,” he added. “For example, she doesn’t get many rebounds, but she always boxes out so her teammates can get rebounds. She’s given us big minutes all year, just like she did tonight.”

The Red Devils are the undefeated Region 9 champions and are a better team than their seed suggests. All five of their losses were to 6A teams and none beat them by more than 12 points. Three of those five teams have advanced to the 6A semifinalsand the other two finished in the 6A RPI top 10.