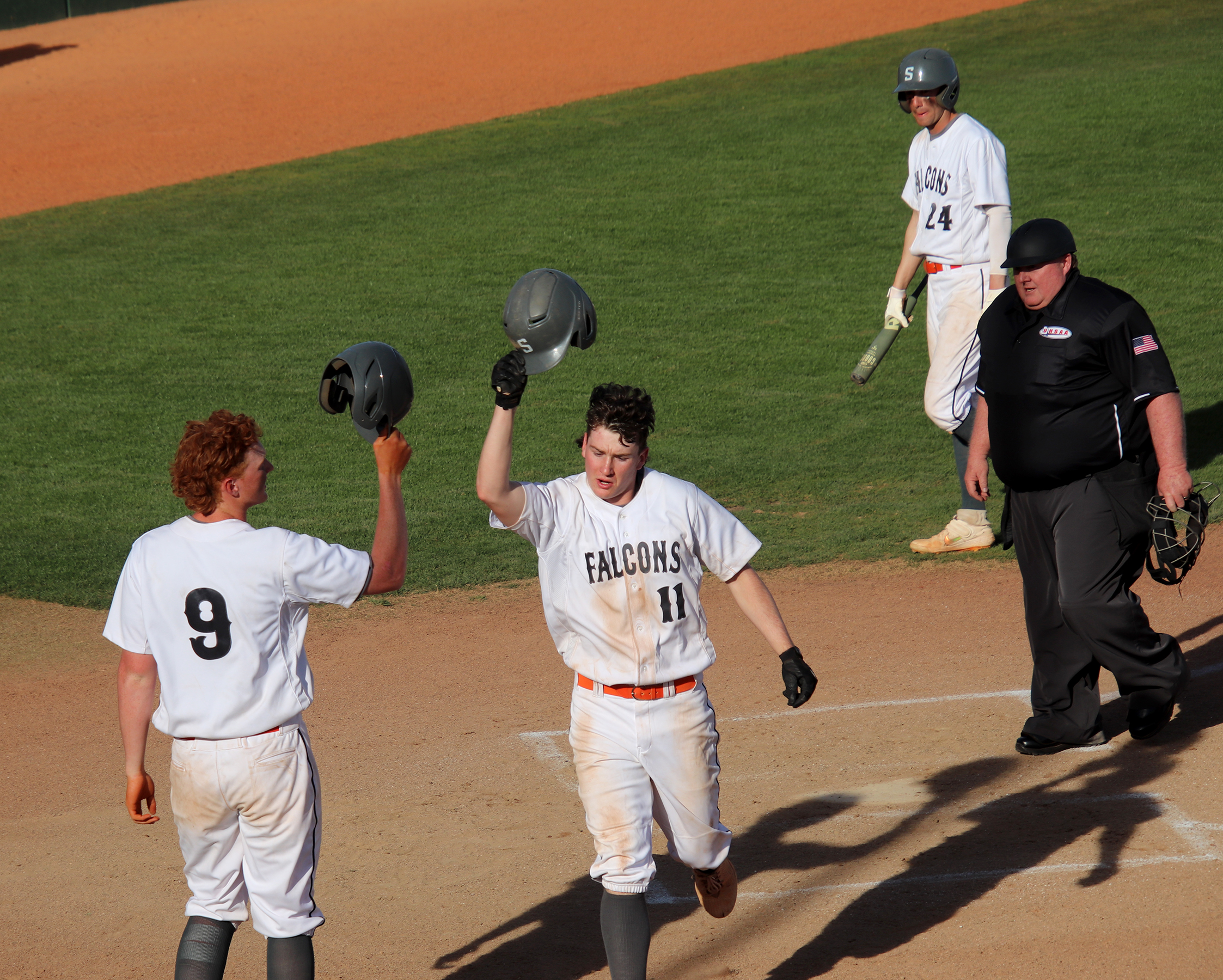 The Skyridge baseball team went 6-2 in the two weeks prior to the spring break. The two losses were just by single runs to out-of-state teams during a tournament at Dixie State March 24-26.

The Falcons got a big win on First Responder night at the ballpark. Junior pitcher Tyler Ball threw a three-hitter in four innings, fanning six against one walk and two runs. Senior Matt Houseman finished the contest on the bump.

Sophomore infielder Ike Pickle rapped a leadoff single and was followed onto the bags by Ball, who drew a walk. Both of them came across on a hit by senior Colby Carter.

Senior outfielder Nick Holland doubled in the second inning and came across on a Pickle single. Pickle stole second and advanced to third on a bloop single by junior Dalton Young.

Ball was then hit by a pitch to load the bases and Pickle scored on senior Seth Norton’s sacrifice fly. A Carter single scored Young to give the Falcons a 5-0 lead, more than they would need.

Pickle had a perfect night at the plate, going 4-for-4 with a triple, four RBI and four runs scored. Ball added a three-run homer and senior outfielder Jarrin Kalama added a two-run four bagger.

The Falcons gave up four unearned runs in the first two innings and couldn’t generate enough offense to overcome the deficit. In the final at-bat, Arbor View retired Skyridge with the bases loaded. Starting pitcher Nick Holland took the loss.

Things went a little better against the Patriots, whose only runs were unearned. Carter collected the win with seven strikeouts against two walks, while junior Tytan Tate retired the side in order to finish out the contest.

The Falcons made 11 hits and also drew seven walks to build a 12-1 lead after the first three innings. Ball hit a three-run homer and later walked another run in. Carter was 3-for-3 with two RBI and a run scored, while Young was 2-for-2 with three RBI and scored twice.

The Falcons plated 12 runs in the sixth inning to blow up a 7-2 contest. The Mustangs scored their two runs in the bottom of the first and were shut out the rest of the way in a combined effort by the winner Kalama and his relievers, junior Gavin Bauer and junior Mason Thompson.

The 11 Skyridge hits were provided by nine players as many reserves got some minutes in this one. Carter had two hits including a double with three RBI and two runs scored to lead the offense. Kalama also had two hits with a double.

Sophomore Jaxon Salcido had a two-run triple and also scored, while senior Stockton Salcido made two runs and Holland had a double.

Both teams struggled with their fielding in the final game of the tournament, but the Falcons came out on the short end after giving up three unearned runs in the bottom of the fifth inning.

Ball got the initial lead with a solo homer in the second, but Skyridge only got one more run after that as Carter crossed on a Stockton Salcido single. Ball took the loss and sophomore Alec Lewis finished out the game on the bump.

The Falcons pulled off a thrilling victory over the then-No. 1 Miners at home. Holland labored for the win by scattering four hits for two runs with seven strikeouts and four walks. Carter retired the side in order to slam the door shut on a comeback.

Bingham got the initial lead with a run in the top of the second, but Skyridge matched that in the bottom half as Norton got aboard on a leadoff double and scored on a Kalama single. The Miners retook the lead in the top of the third, but the Falcons again responded.

Holland and Pickle both scored on successive sacrifice flies by Ball and Carter to give Skyridge the 3-2 lead. In the bottom of the sixth, Holland plated three with an inside-the-park home run, and Kalama doubled in the other.

Playing at BYU, the Falcons shut out the Sentinels while turning 12 hits and five walks into their eight runs. Ball was the winner, giving up just two hits while fanning eight against one walk. Lewis retired the side in relief in their final at-bat, striking out two.

Skyridge got things started offensively in the top of the second inning as Stockton Salcido doubled aboard and was then doubled home by sophomore Isaac Johanson. Holland walked, and both scored on a Kalama triple for a 3-0 advantage.

The next inning, Young registered an in-the-park home run. Ball reached base with a single and was doubled home by Carter. Later, Norton and Carter were singled across by Stockton Salcido. Young tripled in the fourth and Carter singled him home to complete the tally.

In the first extra-inning contest of the season, the Falcons won a thriller with a walk-off double by junior infielder Ty Evans in the bottom of the eighth inning. With two outs, Ball drew a walk and advanced to second on a passed ball. Evans came in as a pinch hitter and brought Ball across for the victory.

Carter got the start and pitched four innings, with Houseman, Lewis and Bauer all making appearances and Kalama finishing out the contest.

Young went 3-for-5 with a pair of doubles, two RBI and two runs scored. Johanson had two hits, Holland two RBI, while Ball and junior Crew Schenk each scored twice.