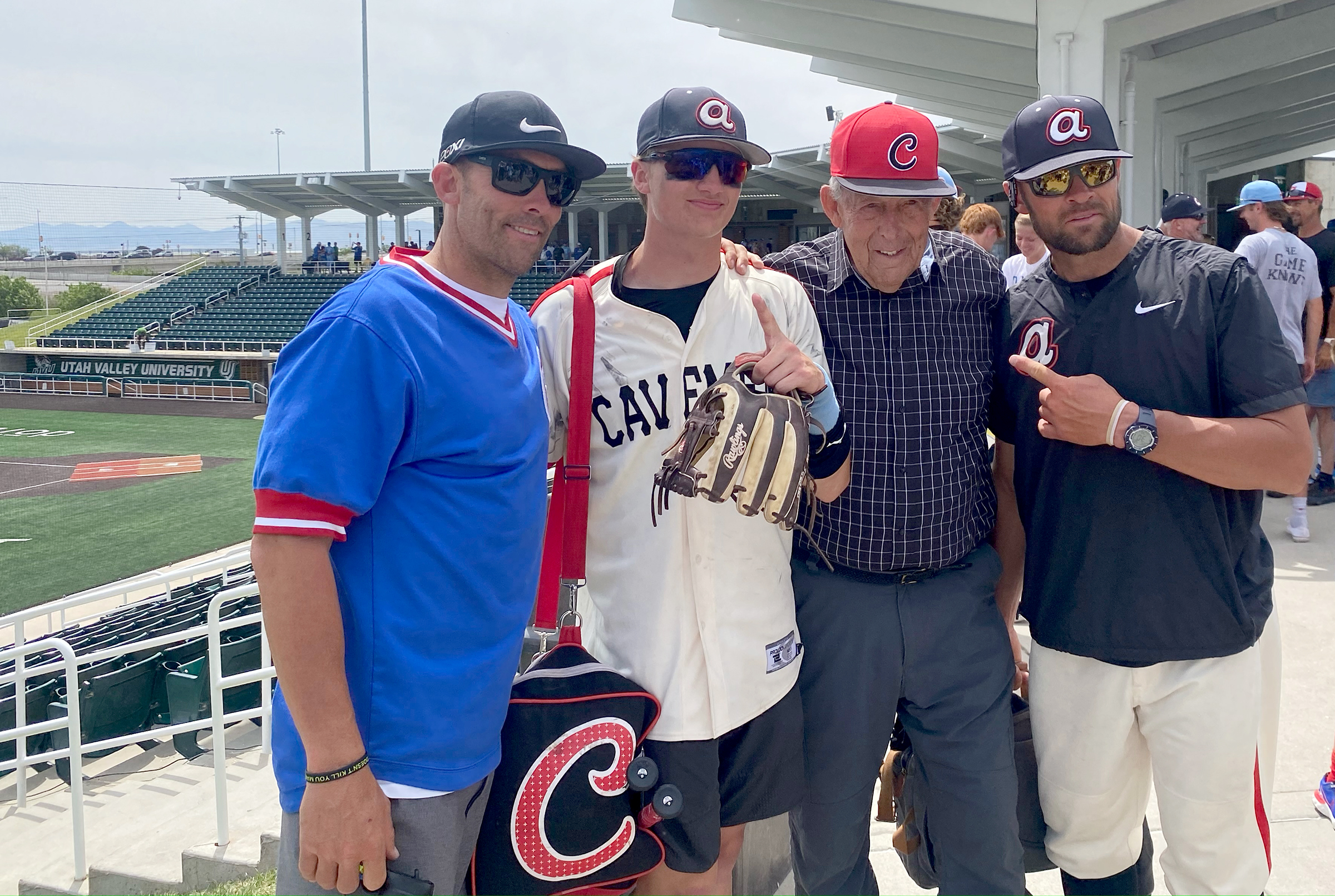 As he surveyed the spectators filing into the stadium at Utah Valley University to watch the opening game of the 5A state championship series, Rob Cuff, executive director of the Utah High School Activities Association, expressed a concern that there wouldn’t be enough seats to accommodate the crowd.

“You know, people from Lehi and American Fork like to watch each other’s games,” he said. The Pioneers were playing in the 5A contest and the Cavemen in the 6A game to follow.

Cuff feared that most of those present would stay after the Lehi game, leaving little room for new attendees coming to watch the second matchup. That did, in fact, happen, so many late arrivals ended up finding a spot on the high berms to the east of the stands or just watching on their feet behind them.

At first glance, this might seem like a strange thing, and probably did to the parents from Olympus and Riverton who came to see their sons play. After all, the two local teams are in different classifications, and therefore different regions, so it wouldn’t seem likely that there’d be much mutual interest.

However, if you’ve been around here very long, you’d know differently.

First of all, the schools are separated by just four miles, and they are the oldest crosstown rivals in the North County. Although both towns held high school classes earlier, American Fork officially opened in 1902 and Lehi six years later.

Their teams began to play each other right from the start andhave been facing off for well more than a century now. Over that stretch of time, they have drifted in and out of the same classifications and regions as the school populations changed or were divided.

Although the towns are both much bigger than they used to be, there is still a core group in each who are descended from earlier settlers of the area and ignore the artificial boundaries that separate them, maintaining their ties of family, shared history or friendship.

Both towns include longtime residents who have contributed multiple generations to local athletic dynasties, and continue to do so.

The Ingersoll family is one of those. And right now, it claims the head coaches of both the Lehi and American Fork baseball programs, Jason and Jarod, respectively.

The brothers are all of one year and 10 days apart in age and grew up competing with and against each other. They are the youngest children of local coaching legend Carl Ingersoll, now 90, and the late Gene Oborn Ingersoll, and they remain the closest of friends.

Jason spent years on Jarod’s staff at American Fork and they celebrated a 5A championship together in 2012. Jason came to Lehi after that and just won his first state title, while Jarod’s teams won again in 2016 and 2021.

Besides that, the brothers each have a son who played for them this year, junior Bowen for the Pioneers and senior Fisher for the Cavemen.

The ties between the programs and schools don’t stop there. Jarod’s wife Jamie grew up in Lehi, the daughter of former Lehi High School assistant principal Lloyd Jacobsen – who just happened to be the head coach when the Pioneers won their only other baseball titles in 1978 and 1981.

Jamie later taught at Lehi for years and built a powerhouse volleyball program, leading the Pioneers to the state championship in 2015, the same school year that her husband’s team got him his second ring. She retired from coaching after that and still teaches in Lehi at Skyridge High School.

The elder Ingersoll, Carl, is a self-confessed late bloomer as far as athletics went. He called himself a “little shaver” in high school and said he wasn’t considered a suitable candidate for the school teams. He said he was allowed to be the manager for the football team and was cut from the basketball team.

After graduation, Ingersoll enrolled at BYU, but the Korean War broke out. He flunked his initial draft-ordered physical but passed the second one after his spring hay fever and asthma cleared up. He entered the Army and became a paratrooper. He played two years on the basketball team at Fort Bragg.

After his discharge, he returned to BYU and got a degree in physical education. After a year at Bingham, he returned to American Fork to teach biology and coach. He was an assistant football and baseball coach for several seasons before taking over the basketball program.

He spent eight years in that job, during which stretch his teams reached the title game four times and won the championship in 1976 and 1979. He went on to coach at BYU as an assistant under Ladell Andersen, returning to American Fork after Andersen stepped down.

He served as athletic director for a time and when the school was split to form Lone Peak, he went there and coached the basketball team for two seasons before retiring.

Jarod and Jason played football, basketball and baseball in high school, sometimes on the same squad and other times on different ones. Their baseball coaches were Kim Nelson, who moved to Timpanogos when it opened and is still there, and Mike Shoell, who retired in 2016 after 29 years of coaching.

“We learned a lot from those two,” Jarod said. “We owe a lot to those guys, and we still try to do some of the things they taught us.” Jarod played first base, and both of them were outfielders.

Jason played basketball at Snow College after returning from his mission for the Church of Jesus Christ of Latter-day Saints. Jarod was at Southern Utah then on the baseball team. Jason tried to walk onto the basketball team after finishing up at Snow, but Jarod convinced him to join the baseball team instead.

“That’s just the kind of athlete he was,” Jarod said. “He made the switch and helped us win some down there.” The two played together a year, and then Jarod helped coach his brother the next year as an assistant while both were finishing up their degrees.

Jarod did his student teaching at Lehi and went to American Fork when he filled the coaching vacancy there. Jason worked in business for a few years but wanted to be a coach and teacher, so he came back to the classroom and Jarod added him to his staff.

This year, both teams won their respective region championships while Lehi won a title and American Fork finished second after claiming the crown a year ago. Through it all, the brothers and their extended family have cheered each other on and enjoyed sharing their achievements.

“I definitely wanted Jason to have his success,” Jarod said. “He’s paid his dues and I think he deserved it. It’s not easy to win a championship and he’s got that program headed in the right direction. He’s also one of the greatest human beings that ever lived.”

Carl was on hand, as he has always been, to watch his boys make their latest bids for titles. “It’s really something to have him here since he’s also a state champion, along with my brother, who’s my best friend,” Jason said. “But, it stops there. This win is all about the kids and the school, it’s not about us.”

Spoken like someone who understands what the true purpose of high school athletics is, as any Ingersoll would tell you.