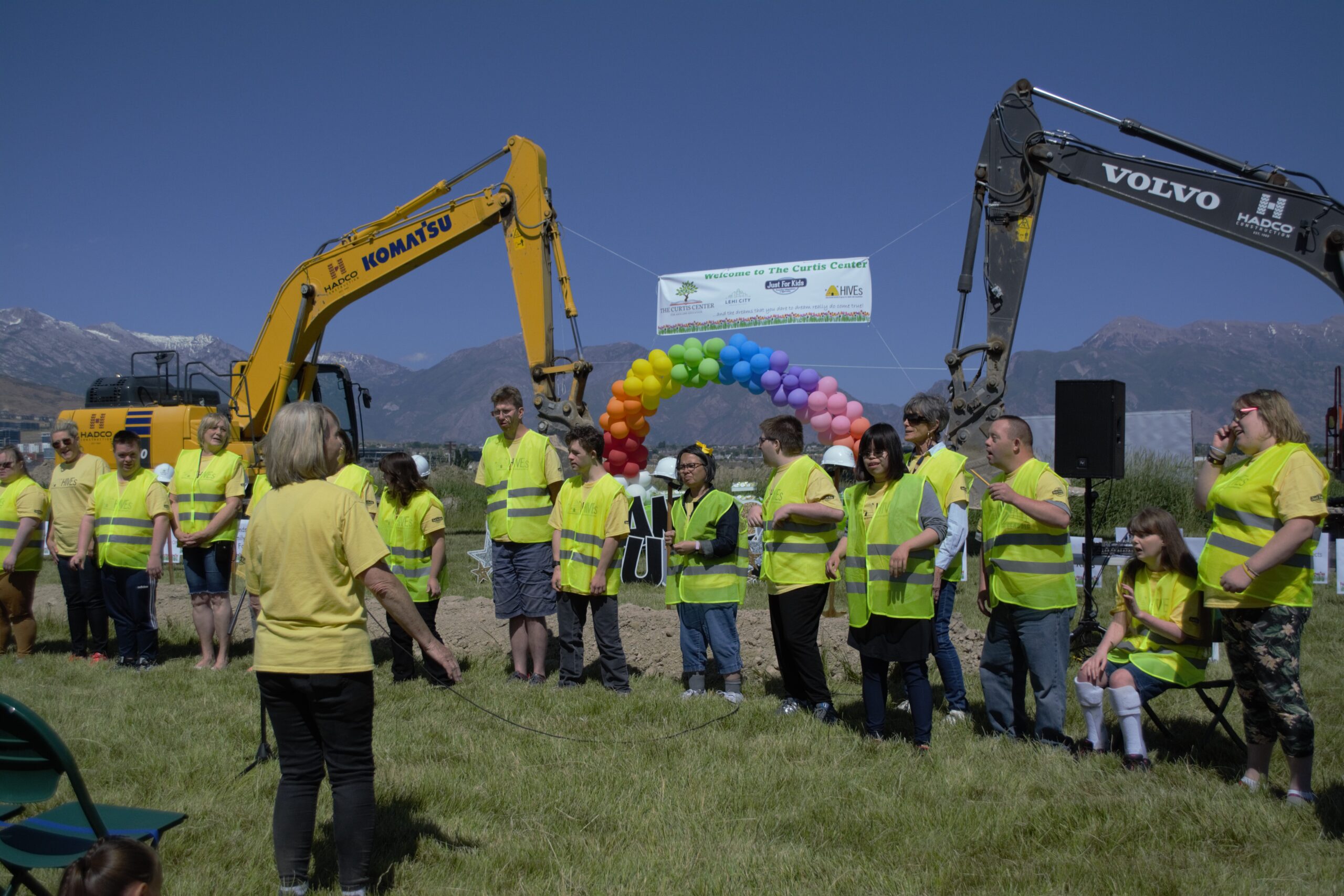 Lehi City and Just For Kids of Utah County broke ground on the Curtis Center on Tuesday, June 14. The facility will serve as a base for the non-profit, serving the special needs community and providing more space for city programs.

“This started with a handful of mothers with special needs children,” remembered Michelle Holbrook, founder of JFK of Utah County. Their group used a classroom at Lehi High School that first summer and have continued to join with Lehi City and businesses in town to provide venues for their programs.

Holbrook has spent the last 20 years creating programs and raising money for children and adults with disabilities. It started when she picked up her then-four-year-old son Curtis at a private summer preschool and found him sitting in a small chair in a classroom for two-year-olds. Curtis was born with a rare form of Prader-Willey Syndrome. “The teacher said he was in the younger class because that was his learning level,” said Holbrook. “It made me realize I would need to think outside the box and figure things out instead of relying on anyone else to do it for us.”

Michelle Holbrook already had a teaching degree, but she went back to school, became licensed to teach Special Education, andlater earned a master’s degree. “Being in Special Ed, I saw what we needed and what to prepare for with Curtis,” she said. “I just wanted to be where Curtis was.” Michelle’s husband, Scott, was self-employed, and the family needed the insurance from her job for the many medical expenses involved in caring for Curtis.

The adaptive programs under JFK of Utah County have grown as Holbrook and her team saw what their children need. “When Curtis couldn’t keep up with other children on the soccer field or in other sports, I approached Lehi City about starting an adaptive swimming program. They are always quick to help us. They said, ‘No one had ever asked.’ That’s how our swimming program started.”

“We borrow space everywhere with our HIVES group,” Michelle explained. “People are always so good to us – we have volunteers doing fitness classes, we take them to weekly LDS Institute classes by The Church of Jesus Christ of Latter-day Saints, and they donate the space and pay the teacher for those who attend. We eat lunch with the seniors once a week. Lindsey Larsen (formerly Miss Utah County and now Miss Utah) teaches a dance class for us once a week.”

Although they’ve been successful and happy with the model of borrowing and leasing space where they can, Holbrook and her team need a place they can always count on that fits their needs.“We never know if we’ll have a gym to use, and we’d love to have theater-type productions, but we don’t know if someone else will be renting the space we need,” Holbrook continued. “It’s by accident that we’re in the community so much, but that’s ended up being great. We’ll still go to these different locations;we’ll just have a base now.”

The Curtis Center in the northwest Lehi area (just south of 2100 N) is finally breaking ground after years and years of fundraising by Just For Kids.“With the land, this is a nine-million-dollar project. The hardest part about this is raising the money,” said Holbrook.

Once construction is complete, the Curtis Center will be deeded to Lehi City. The details aren’t set, but Just For Kids will use the facility during the day and be available in the early morning and evenings for various uses. Lehi City will maintain and operate the Curtis Center. They hope to start using the new facility by the Fall of 2023.