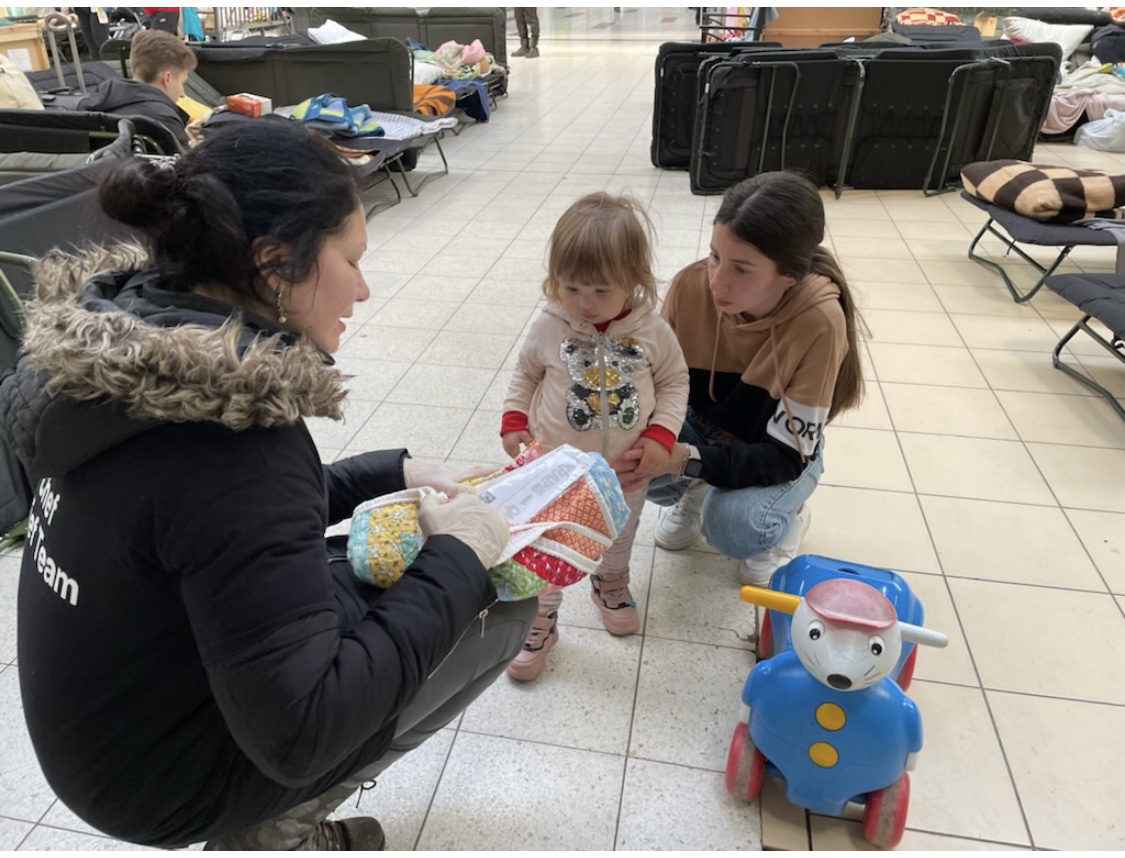 On his first trip to Poland in early March, Hal Halladay wasn’t sure what to expect or how he would distribute more than 200 quilts he and his wife Gina had collected for Ukraine refugeeswith their Wrap Ukraine With Quilts project. He traveled with a chef named Harry, a contact set up by Hal’s friend Mike Jensen. Harry, once a refugee from Afghanistan, fills a truck with food and equipment and drives to a refugee center in Poland to feedpeople for free every few weeks. Harry and Hal met two Ukrainian women walking with their children on the road.

“The older woman immediately wrapped herself up in a quilt,and it made her so happy,” remembered Hal. The younger woman, Masha, spoke a little English and thanked Hal and Harry for the gifts. Emboldened, the two men headed to a train station to give away more quilts.

“People getting off the trains were shell-shocked and traumatized. They were a little suspicious of us,” said Hal.

A few days later, Hal was reunited with Masha, working for Harry in the kitchen, feeding refugees in a giant warehouse. Hal could look in the door, but security was tight, and only refugees were allowed inside. He still had two full bags of quilts to hand out, so he plucked up the courage to ask Masha if he could go into the center after they’d finished doing the dishes.

“She led me right in and started handing out quilts,” said Hal. “She didn’t ask me what to say, but I noticed she always used the words ‘Americana mamas’, and the women would get emotional. I found out she was telling these refugee mothers with their children in a warehouse full of cots, ‘American moms made these for you.’”

Since that first trip to Poland with a few hundred quilts, Wrap Ukraine With Quilts has collected more than 5,000 quilts from 41 states.

“Five thousand quilts is a lot of work,” said Gina Halladay. “We estimate about 80,000 hours of work that has been donated with fabric and supplies totaling about $1.3 million.”

Gina worked a booth at a quilt expo in Sandy in May, where she collected hundreds of quilts and a few thousand dollars for shipping costs. One woman at the quilt show recognized the Wrap Ukraine With Quilts logo from a makeshift orphanage she’d been volunteering at the week before. “Every bed at the orphanage had one of your quilts on it,” the woman told Gina.

“Nobody drops off quilts and says, ‘Look what I did for you.’ All of them thank us for doing this. They’re so grateful to us when they’ve driven for hours to drop off quilts that they’ve taken the time to make,” marveled Hal.

“I think they’re grateful to have a pathway set up and organized – a way for them to help,” added Gina. “They can see the process and the progress; they can see the numbers go up and feel part of this journey. The social media posts have really helped, and the QR codes.”

In just a few short months, Hal and Gina and Gina’s friend Beth Hawkins in Ohio have created a network of giving from businesses like SoftServe in Lehi with employees in Ukraine and people who travel there every few weeks taking quilts to guilds and groups, all over the country getting to work on handmade quilts and blankets for Ukraine refugees.

“The war is still going on. Almost everyone here has a close connection to someone over there. I don’t want us to forget that they’re out there fighting for freedom and democracy and the right to determine their future,” said Jason Price, a partner at SoftServe, at a company lunch in June. Price handed out quilts at the train station to people carrying everything they had in grocery bags. “Their eyes lit up when they got the quilt and realized someone cares about them,” he said.

“The situation on the ground and the needs are constantly changing,” said Price. He was there in April and thought he would help people get out of Ukraine, but when he got there, he found that people needed help getting around – train tickets, rides, etc.

“The people in Poland have been amazing. Americans maybe equate Russians and Ukrainians together, but there’s a strong brotherhood between Poland and Ukraine. They share a lot of culture and history and are oppressed by Russia. They consider Ukrainians their brothers and sisters, and they’re helping every way they can,” Price continued.

Nataliya Vasyutyn, whose husband works at SoftServe, was visiting her parents and a sister with small children in Ukraine when the war broke out. Between covid tests and being unableto fly out of Ukraine, it took Nataliya weeks longer than she’d planned to get home.

“We didn’t realize our city could be shelled because we’re in the west near the Poland border. We didn’t think what we’d need to do,” Nataliya recalled. The family emptied their outdoor cellar and made beds on the shelves. Every time the air raid sirens started, they would run to the cellar for a few hours. “It was difficult to explain to the young children why we have to hide.”

Once they felt the danger wasn’t as severe, they made their shelter inside the middle room of the house. When the children hear a siren, they yell, “Everyone run and hide!”

“We didn’t know what to do next. We never thought this would happen,” Nataliya explained. “Realizing that people all over the world are trying to help Ukraine gives us hope. We didn’t expect to stay in it for so long time. Russia is much bigger, and they have much more war experience. We were just preparing to leave. I don’t think Ukrainians would ever accept being part of Russia again.”

“Ukrainians are friendly, but maybe not so much with strangers. The war has really connected us. We’re helping each other,” said Nataliya smiling. “There are people who lost everything in one day. Even if we’re liberated, people will have to start over somewhere. I have a lot of Russian-speaking friends, and I would say 80% of them have switched to speaking Ukrainian instead. Their Facebook posts are in Ukrainian. It’s another thing that unites us. We’ve had pro-Russian rulers who have tried to separate us. We’re united.”

Nataliya confirms that projects like Wrap Ukraine With Quilts gives the people hope and courage, knowing people in America are thinking about them. The number of donations is higher than Gina imagined, but she still keeps track of each one. “I’ve touched every single one and registered them on the website,” she said.

Masha has continued to help distribute quilts with Harry in Poland. Hal notifies them when friends are coming to Krakow with quilts, and Harry goes and gets them. “When people hear about what we’re doing, and it resonates with them, they find a way to help,” Gina said.