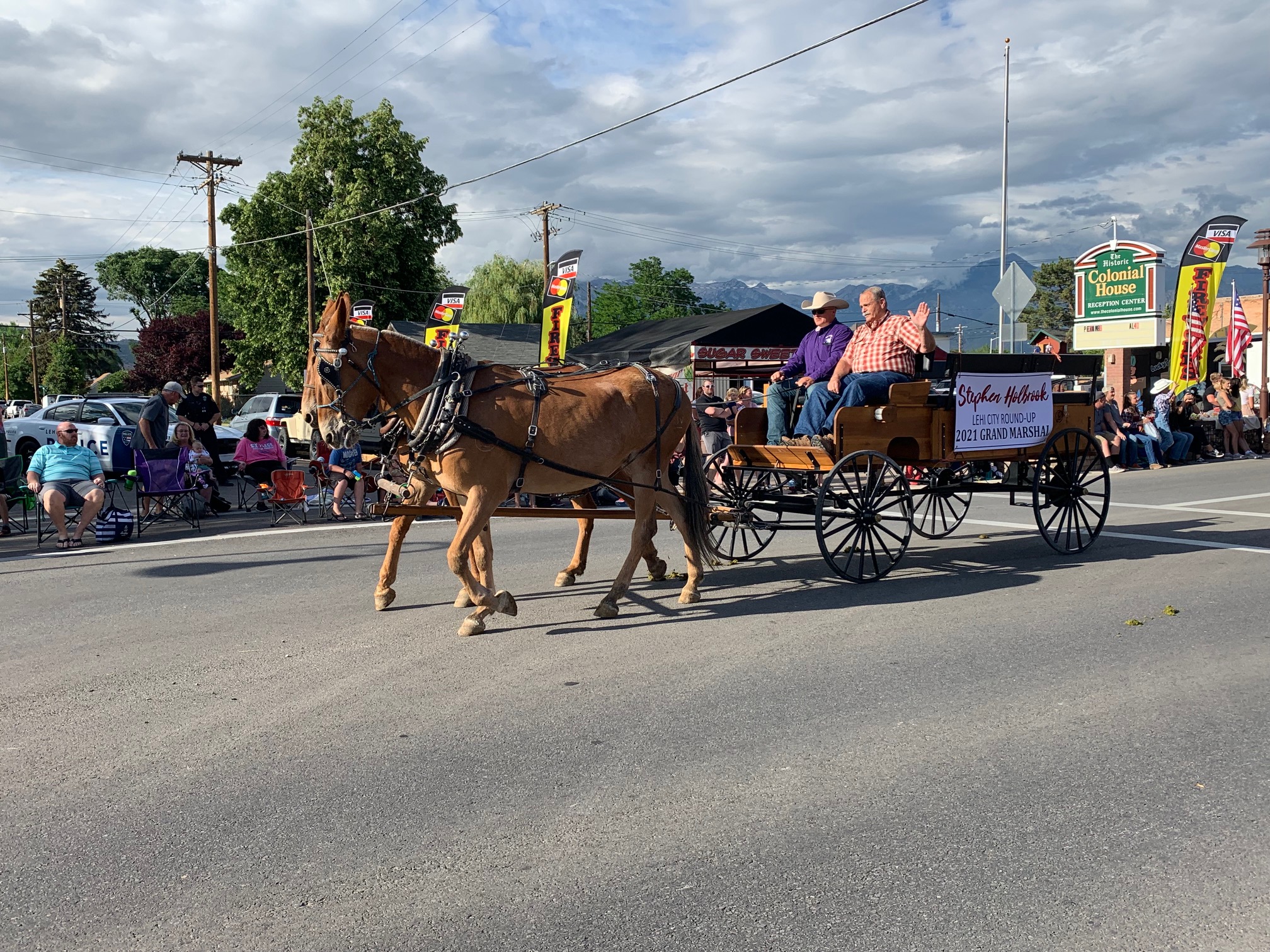 For years Coddington has driven his mule team around the streets of Lehi. Riding around town is getting harder and harder, but Coddington gets more thumbs-up from passersby than not. “Most people think it’s pretty cool to see me driving my mules around town,” said Mark. “I like to keep them traffic-broke, especially for parades and rodeos. They need to be bomb-proof that way.”

Coddington and his mules have pulled Santa and Mrs. Claus in the annual Santa parade, the grand marshals of the Round-Up parade, a handcrafted hearse for funerals, and they’ve even been on the television show “Yellowstone.”

“A mule won’t get you in trouble. If you get in a bad situation, like driving down the road – railroad tracks are a boogeyman to animals,” Mark explained. “Mules will walk up to them, look,and step over them where horses will stop and balk when they see railroad tracks. You can “cowboy” on a mule, but a horse is better. You’ll never see a mule do pick-up at the rodeo, for example.”

Mark Coddington was born and raised in American Fork. His wife Shanalyn is a Lehi Fox, a name that goes back generations in town. Mark has been involved in the Round-Up Rodeo for almost 20 years. He started on the grounds committee, and now he and Shanalyn supervise the queen contest and the flagpresentations. “Sometimes it gets to be a lot, but we love it. Round-Up is like Christmas at our house.”

The first year the Coddingtons went to the rodeo convention in Las Vegas with other committee members, they were with the rodeo clown Lecile Harris, a legend at the Round-Up for years.“In the rodeo world, Lecile was a rock star. Being at the convention with him was really cool,” remembered Mark with a grin.

Organizing a small-town rodeo for the Coddingtons and the rest of the committee is no small undertaking. “It takes a village – people don’t realize everything that goes into putting on the rodeo. I’m blown away by the number of volunteers it takes. This is almost a year-round job, too. You don’t realize until you’re part of it.”

The Thursday night stock parade is a favorite in the Coddington family. “It keeps that little bit of heritage and that western way of life. People go back in time when they see a team pulling a wagon. It adds to the atmosphere, to what we’re trying to do,” explained Coddington. “The sense of community is amazing. People shelf their differences and just come together for that week and celebrate. Every little detail adds up.”

Mark is looking for a new mule team after selling his earlier this year. For the last 15 years, he’s missed the first hour of the rodeo because he’s putting away his team, which takes a good hour. Not driving a team this year is bittersweet, he’ll miss it, but he’ll get to sit with Shanalyn in the stands for the first time in more than a decade. “I’m excited to see my daughter carry the flag,”he said.