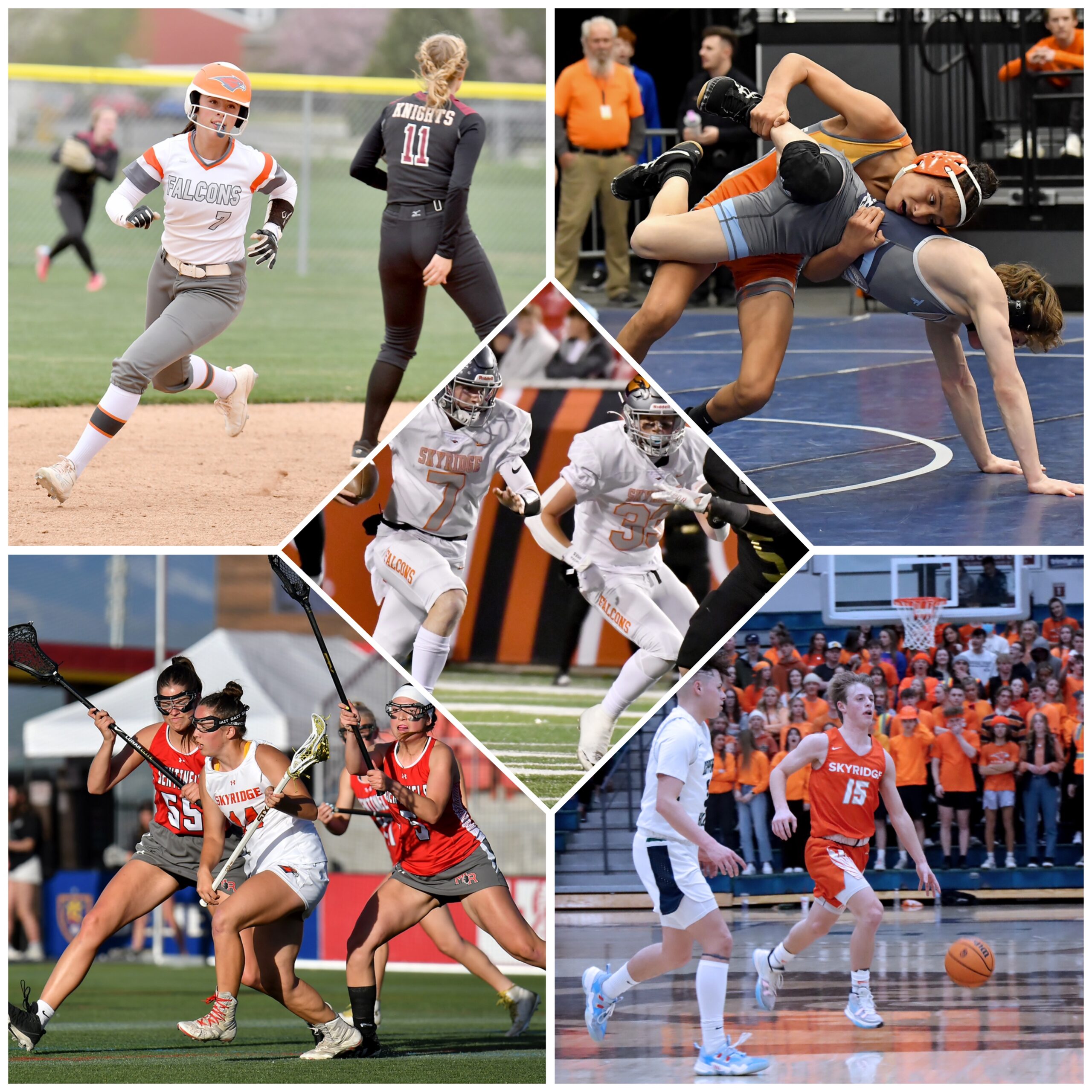 The athletic teams at Skyridge High School won the 6A state championship for the second straight time in girls tennis and also claimed second-place honors in girls soccer, boys track and girls lacrosse along with four Region 4 trophies. Other teams finished just below the top spots.

The Falcons came in fourth overall in the All-Sports Award competition this season. Lone Peak was the combined winner with 107.5 points, followed by Corner Canyon at 88, American Fork at 76.5 and Skyridge at 70.2. It’s not a coincidence that all of these teams share seats in powerhouse Region 4.

The Falcon girls ranked second in the gender-specific standings, while the boys teams finished in fifth place on their list. Following is a team-by-team summary of the Skyridge sports school year.

State 6A finish: 1st Round

Season highlight: Senior Lars Beck and sophomore Gavin Hansen tied for 12th place in the individual standings in league play with a stroke average of 76.1. They were the top statequalifiers for the program, but Preston Branham was the team’s top finisher at the state tournament, tying for 39th place.

Season highlight: The Falcons won a second consecutive 6A state championship after earning the #1 seed in every bracket at the Region 4 meet. The first and second doubles players reached the semifinals, the third singles player was the bracket runner-up, and the two doubles pairs claimed the gold. Savannah Johnson and Kylee Sperry posted a perfect record for the year.

Season highlight: Seth Wallgren capped his prep career by medaling in fourth place at State with a 15:16.3, the same position he finished in last season with his state champion team but with a much faster time this year, attesting to the toughness of the field.

Season highlight: The Falcons battled their way through the state tournament, surviving with a shootout victory in the semifinal to reach the title match before falling to Riverton and receiving the silver trophy. Six players were honored with All-State recognition.

Season highlight: The Falcons lost in the state quarterfinals but finished the tournament by winning their final two matches to place in the top five. Three players got All-State honors.

Season highlight: The three teams who tied for the league title all made it to the state final four, but the Falcons weren’t able to get past Lone Peak for the third postseason in a row. Six players were tapped for All-State recognition.

Season highlight: The Amurelles had a good showing in the quarterfinals by performing all three competition routines with enthusiasm and precision. Their coach considered it a positive end to a challenging season.

Season highlight: Josh Millward repeated as a state champion in a new weight class after posting a 40-3 record this season. Lianny Barrena finished fourth in the girls tournament and both of them later accepted scholarships to continue their careers at the next level.

Season highlight: The Falcons competed well with just two seniors, qualifying for a bye in the first round of state play and reaching the quarterfinals before falling to eventual 6A champion Lone Peak. One underclassman got an All-State nod.

Season highlight: The Falcons started with five straight wins and subsequently ground out four gutty victories to start the tough league season, but struggled through the remainder of the schedule with a string of close losses. During the playoffs, they pulled out a fantastic win at Copper Hills before bowing out in the quarterfinals. Two players were accorded All-State honors.

Season highlight: The Falcons had a young squad this season and were a work in progress. Addie Branham finished 20th in the overall region medalist standings.

State 6A finish: Tied for 6th

Season highlight: Max Ericksen and Cade Sperry played their way into the semifinals but were then eliminated from the tournament. The first doubles team made the quarterfinals round as well.

Season highlight: After dropping the opener to the state’s top-ranked team, the Falcons never lost again until the close championship final. The Buechner sisters, Rivanna and Haven, filled up the stat sheet every game and were fun to watch.

Season highlight: With their league providing half of the final eight teams in the state tournament, it’s no wonder the Falcons had a tough time competing with the region powerhouses despite a five-game winning streak to open the year.

Season highlight: The boys tied with Farmington for second place and were able to bring home a silver trophy. Seth Wallgren was the only Falcon gold medalist with a victory in the 3200-meter run. Kylie Olsen earned two silver medals. The combined team collected 11 top-3 medals.

Season highlight: The Falcons got one goal in each half and only allowed one score from the visitors as they ended the regular season on a positive note at home. They were eliminated on the road in the first round of the playoffs.

Season highlight: The Falcons made an impressive run in the state tournament without their most experienced pitcher, who was injured right before the playoffs. The team had four All-State players, including three on the first team.

Season highlight: The Falcons ended the regular season on a four-game winning streak, including an exciting victory over American Fork. As the seeding fell, they had to face two Region 4 teams again in the playoffs. They got past Westlake and pushed Pleasant Grove to three games before bowing out.