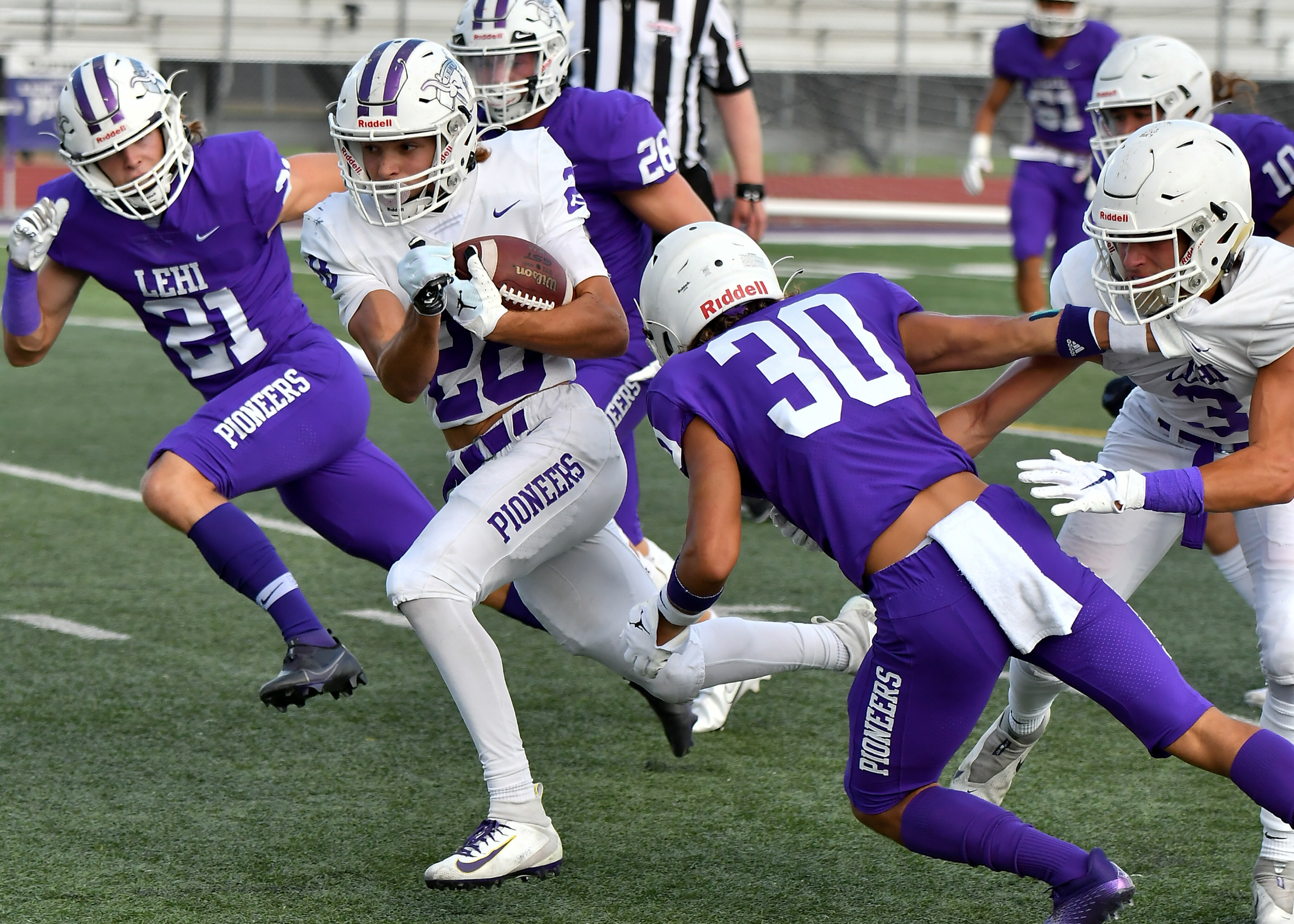 Last year, the Lehi High School football team flew under the radar for the entire season, right up until they obliterated No. 1 Springville in the state championship final.

With eight offensive and seven defensive starters returning, headlined by 5A Player of the Year Isaac Terrell and second-yearstarting quarterback Jackson Brousseau, a Colorado State commit, the Pioneers aren’t going to sneak up on anyone this time around. Instead, they’re carrying a bullseye on their backs.

“We’ve addressed the target that we know we’re going to be with the players,” said Coach Ed Larson. “We told them to trustthemselves and trust their coaches, who are going to have to push them harder because they’re going to get everybody’s best shot.”

The Pioneers got all but two first-place votes in the preseason coaches poll, but Timpview was #2 and Orem #3, followed by Springville and East. That should make for another lively Region 8 campaign.

Still, Larson isn’t crying too much about the troops he’s going into battle with, starting with Brousseau (6-foot-5, 215), now a senior.

The gunslinger completed 295 passes (66%) for 3,255 yards and 36 touchdowns against just five interceptions last season, earning an outstanding QB rating of 109.8 on the year.

“It’s always nice to have a quarterback that gives you a chance to win,” Larson said. “In my opinion, that’s essential for success. There’s no way to fill in if you have a hole there.”

Sophomore Jett Niu (6-3, 170) is the backup QB and “heir apparent,” the coach said. He got a few varsity reps last year as a freshman.

There are currently two candidates for the right tackle spot, junior Ryker Peterson (6-3, 280) and senior Parker Elswood (6-4, 240). “They will both play, and we’ll see how they do,” Larson said.

Returning at running back is senior speedster Carson Gonzalez(5-11, 165). “Pound for pound, he’s one of the toughest kids we have,” the coach said. In 2021 he rushed for 1,226 yards and seven touchdowns, but also had 461 receiving yards with fourmore scores and averaged 120.5 combined yards per game.

The Pioneers have an embarrassment of riches at the tight end position with three college-sized players in senior Kobe Moore(6-4, 225), senior Boston Bingham (6-4, 225) and junior Grayson Brousseau (6-6, 220). Also in the mix will be Maka Havea (6-3, 200); all four should see significant playing time.

The group of wideouts has a lot of new faces who are expected to factor into the rotation. The only one with experience isCooper Felix (6-0, 170), who moved to Lehi last October.

Fenn will likely handle kickoff and punting duties, and the two are vying for the point-after and field goal placekicking reps.

Senior end Terrell (6-2, 245) is back to lead the defensive line after posting 95 tackles including 23.5 sacks in his MVP season. “He’s come back faster, stronger and smarter and is doing a great job for us,” the coach said.

At inside linebacker, there’s senior Keahi Nawahine (5-10, 205) and senior Chanse Miller (6-0, 210), another January transfer from Westlake who started for the Thunder last year.

The options in the secondary are still being evaluated. Senior All-City MVP Kadiyon Sweat (6-0, 185) comes back at free safety and will once again be the primary return man, where he led the nation in return yards with more than 1,200 in 2021.

Still with only four region games, Lehi flipped last year’s schedule except for the Idaho road trip, when the Pioneers will play Highland of Idaho in Rexburg this time around. The Rams were the 5A runner-ups last year.

“We still have a tough slate ahead of us,” Larson said. “We’re playing good 6A teams and then we’ll have our overnight trip to Idaho to glue us together. We have Corner Canyon in the middle of that and hope to show up this time.

“Then we play Timpview and Orem back-to-back at the end of the regular season, so we’re facing high-level competition all the way,” the coach said.

He continued, “We were very fortunate last year to stay healthy for the most part. Right now we haven’t lost anybody throughout camp, but injuries are one thing you can’t predict.”

He said the players have done an outstanding job in the weight room leading up to the season. “We had three or four kids squat over 500 pounds and most players of both lines squat 400pounds-plus,” he said. “They committed to the weight room because they recognized we needed to get stronger.”

He noted that team speed is as good as last year and perhaps even a little better, but noted that “we’re still learning with some kids. We’ll soon see where our execution is. The guys are competitive so hopefully that translates onto the field.”

“How you start is huge when you’ve got everybody coming after you,” Larson said. “Everyone will increase their level of play against us, but we really don’t care who we’re playing. We know we have to stay at our own level.

“When challenges come, it’s up to us to get ourselves back on track,” he added. “It’s always about us first. The new kids won’t understand this until they see it in high school football.

“They’ll have to understand quickly that we want to do whatever it takes to be really, really good going down the stretch to have a chance to repeat our success from last year,” Larson concluded.