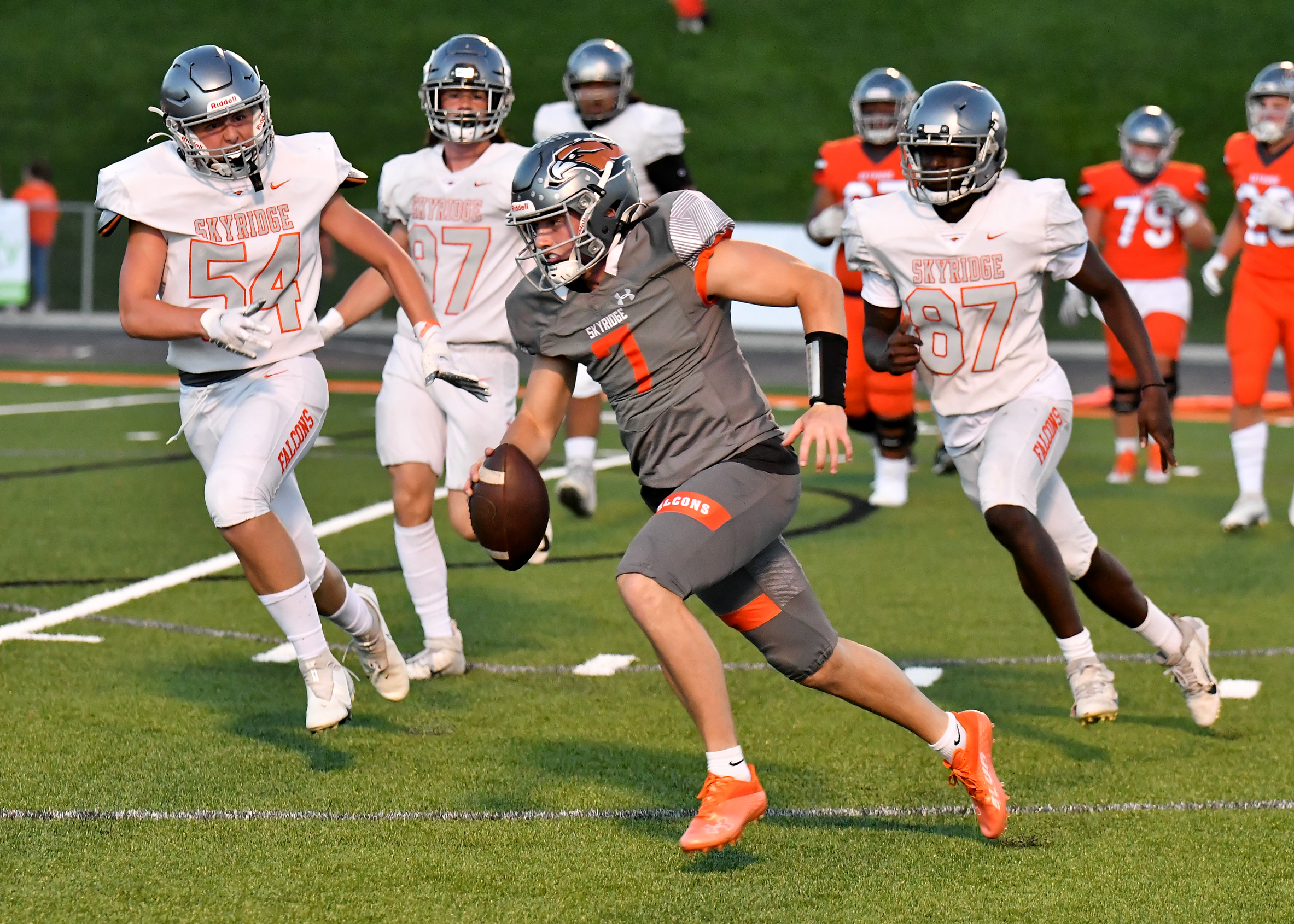 It’s prep football season once again, and to no one’s surprise, Skyridge joins other Region 4 heavyweights on the list of hopefuls for the 6A state crown.

In preseason state polling, the Falcons came in just behind defending champion Lone Peak, followed by Corner Canyon, American Fork and Bingham. However, in the region voting, Skyridge and Corner Canyon were tied for first place with Lone Peak third and then American Fork, Westlake and Pleasant Grove.

Which only proves the point that it’s likely going to be a battle between these top-tier programs once again and no one can really predict at this stage how it’s going to turn out.

That being said, the Falcons do have one very important factor in their favor going into this season: experience. The program returns six offensive and 10 defensive starters from last year, while their main rivals must replace many more of their top producers from 2021.

The talent level in all of these programs is so high though that this advantage will probably wane as the season grinds on, so hopefully Skyridge will make the most of it in the early going as Jon Lehman completes his tenure as head coach whiletransitioning to a new role as the school’s athletic director.

The Falcon hopes rest squarely on the shoulders of three-year starting quarterback McCae Hillstead. A Utah State commit, the senior can run or pass with equal skill and Lehman calls him a “talented, tough leader.”

“He has the right mental makeup and he’s really experienced so he’s very confident coming into this season,” the coach said.“He presents lots of different looks and has lots of experience in big games, so he’ll be able to establish us on offense. He’s also agreat teammate with all that goes along with that.”

Lehman said he’s pleased overall with his options and depth at the receiver positions. At tight end he has a pair of seniors. “Josh Davis is a long, athletic tight end who is comfortable split out from the formation and has a good catching radius and goodspeed,” the coach said.

“Caleb Yentes is a physical tight end who can do a lot as blocker. On the inside we have junior La’akea Kalama, a dynamic player with the ball in his hands who’s also good on the underneath stuff,” he continued.

“On the outside, we have guys who can make plays and run our scheme,” Lehman said. He thinks he’ll rotate five or perhaps even six at the wide receiver spots. He expects the group to include seniors Jackson Andrus, Kyle Valdez, Trent Call andCannon Jensen, who’s coming back from a summer injury.

Also in the mix will be junior Jack Burke, who is the backup quarterback as well. “These players are all good teammates who are mentally comfortable with the rotation,” the coach said. “They’re all very talented and can make things happen for us.”

Behind those two is a group that includes juniors Zaeden Seluand Trey Syddall plus sophomore Jared Iakopo. “These guys have different skill sets,” the coach said. “They don’t have a lot of varsity experience, but I really like their talent.”

There’s a group of players still competing for the kicking positions, but senior Ian Keeslar is in the lead for now. Hillstead may be among the punters this year.

On the offensive line, sophomore left tackle Ben Howard is “so super talented with a high ceiling as a player. He has a good skill set and mind set,” Lehman said.

At left guard is senior Willy Launoa, at center is senior Garrett King, at right guard is senior Adam Stephens, moving over from the center spot last season, and at right tackle is junior Ami Fifita. Sophomores Darius Afalava and Luke Davies are also expected to play significant reps.

On the other side of the ball, senior Tausili Akana is slated to be a part-time defensive lineman who will also see some action at inside and outside linebacker. Sophomore Deshawn Toilolo and junior Ian Mariner are other defensive linemen of note.

The Falcons have a tough group of returning linebackers in seniors Sione Westover, Collin Sheffield and Elijah Terripaia. Joining them will be senior Mason Anderson, who is new to varsity play.

Lehman has five defensive backs that he expects to see gettingsignificant reps. Senior corner Jace Doman has been hurt but is expected back soon. Senior Brady Beers will start at corner but bounce to safety too.

“Our offensive approach will be very similar to what we’ve used the past few years,” Lehman said. “We want to be balanced and have lots of different packages we can use in different types of games.

“Whether we win by throwing 50 times or running 30-40 times, we’ll attack the defenses with whatever opportunities they provide,” he added. “Having McCae allows us to be really dynamic so we don’t have to be one dimensional.”

Skyridge will open the season on the road Friday (Aug. 12) at Fremont. “They’re really well coached and they compete,” Lehman said. “They’re a big 6A school with a lot of talent and they’re reloading.

“First games are always a little uncomfortable because it’s a new team every year,” he went on. “The difference between a win and a loss rests in the uncertainties of the game and how you handle them.

“There’s always a lot of unknowns and the challenge for our team is to be comfortable when uncomfortable things happen,” he added. “We expect our guys to play hard and do a lot of different things which will give us a chance to win.”

New hire Justin Hemm will be leading the offense in preparation for taking over the program as head coach at the end of this season. “He’s bringing in a playbook and organization which will have a big impact on the program and will be our most significant change,” Lehman said.

“He’s a competitive guy who’s well prepared and the kids have taken to him. He runs organized practices and works the playersreally hard. Justin fits the bill on all that and bringing him in now was to smooth out the transition going forward and set up our program for future success.

“Having him here will be good for this year as well as the future,” Lehman said. “A lot of times the perfect world doesn’t come together but in this case it did.”