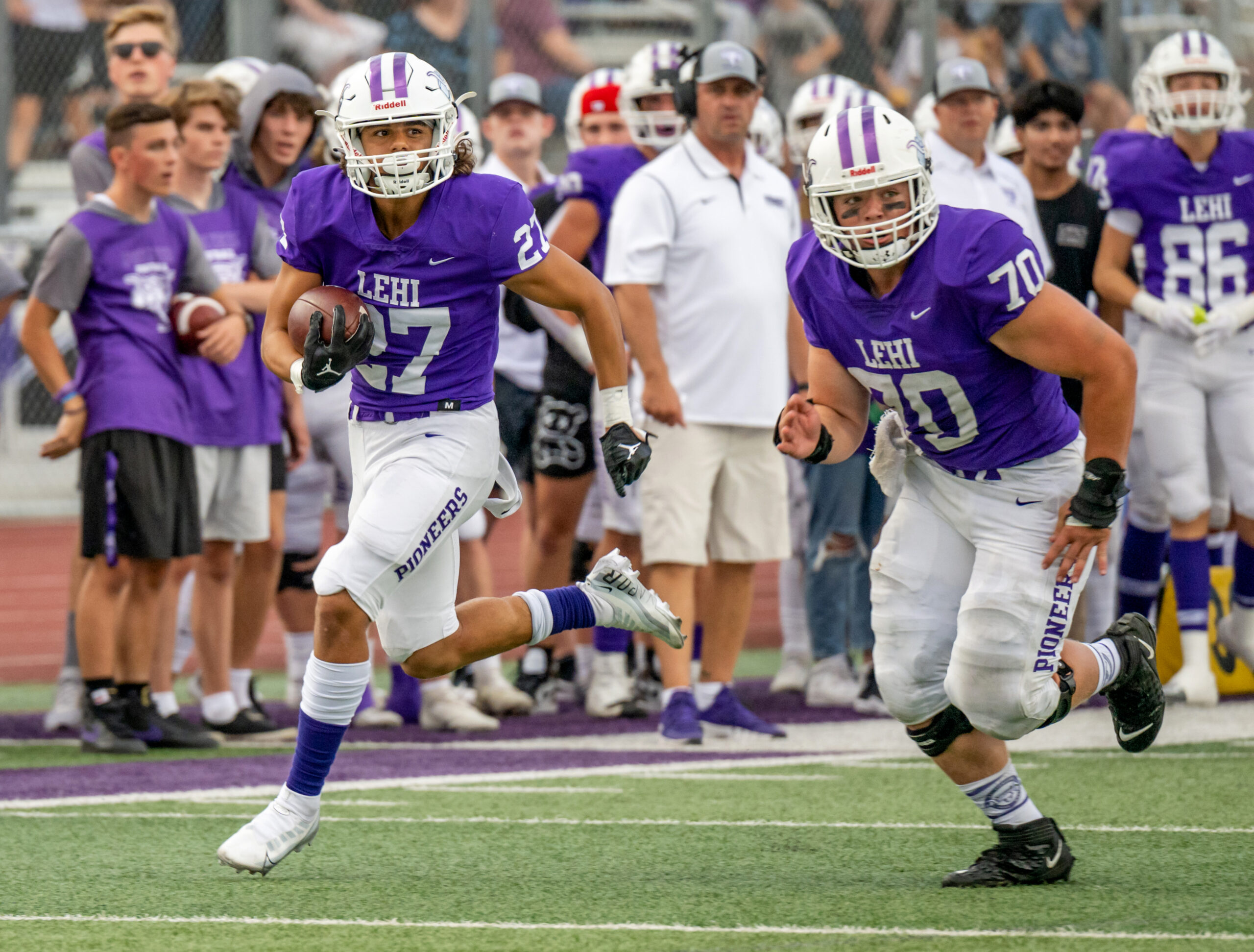 The Lehi High School football team got off to a quick start with the help of some heads-up defense and never looked back as thePioneers trounced Salem Hills 48-0 on the road Aug. 19.

Lehi got a touchdown pass right out of the gate, but it was called back. The possession ended fruitfully anyway as the Pioneersdrove down to the Skyhawk 4-yard line.

Senior quarterback Jackson Brousseau connected with senior tight end Makefefie Havea for the score from there. The point-after try failed, so the tally remained 6-0 at the 9:39 mark of the initial quarter.

With about four minutes left in the period, senior defensive tackle Nathan Bulpitt recovered a fumble on the Salem Hills 39. Two minutes later, Brousseau tossed to senior wide receiver Fernando Ruelas for the 9-yard touchdown. Sophomore kicker Gavin Fenn got the extra point to make it 13-0 at the 1:58 mark.

On the subsequent Skyhawk possession, senior defensive back Nathan Anderegg pulled down an interception and returned it 30 yards to the endzone. “He played the ball really well,” said Coach Ed Larson. The Fenn PAT made it 20-0 at 1:05 and that score stood to the end of the quarter.

Salem Hills picked off a pass early in the second period but then coughed the ball up deep in their own end and it was recovered by senior defensive tackle Trevor Bulpitt at the 9-yard line. Brousseau hit Havea again for another TD, officially one yard. Fenn’s PAT pushed the advantage to 27-0 at 7:14.

The Lehi defense pinned the Skyhawks down again and their punt was returned to the 29-yard line. The short drive was capped with a 5-yard TD reception by senior tight end Koby Moore at the 2:35 mark. The kick made it 34-0 and that stood to the half.

The Pioneers made short work of their first drive in the third quarter. Brousseau found senior wide receiver Kolton Tanner for an 18-yard touchdown and the kick made it 41-0 just 1:58 into the period.

The final touchdown of the contest came on a 6-yard run by junior running back Kolose Latu. The Lehi defense continued to hold Salem Hills in their own end and never gave up anything even when replacements came in.

Brousseau finished the game 19-of-27 (70.4%) for 231 yards, five touchdowns and an interception. Latu rushed nine times for 70 yards and a score. The Pioneers used 11 receivers in the contest; Moore was the yardage leader with 63 on four catches.

Senior linebacker Hayden Johnson had six combined tackles and senior defensive back Hank Griffin had five. Senior defensive end Camden Williamson had one solo and three assisted tackles, two for a loss including an 8-yard sack, plus two hurries in his first appearance for Lehi.

“Our offense was not as crisp as I’d like in the first half,” Larson said. “Even though we were way ahead, I left the starters in during the third quarter to help prepare them to play a full game. They responded well to our instructions and looked better for those two scores in the second half.”

The coach was pleased with the defensive effort overall. “My defense only gave up four or five first downs and Salem Hills crossed midfield only once,” he said. “They played really, really well but we can still get better. Isaac had a stellar game and Camden gave us great effort in his first start.

“The offense and the kickoff team still have some cleanup to do, but I was happy that the offense came out and finished the job,” he added. “My offensive tackle Jensen Somerville had a really good game but I’m still waiting to get all five offensive linemen playing well at the same time.”

This week the Pioneers take their long road trip as they head north to play Highland of Idaho Saturday (Aug. 27) in Rexburg at 5 p.m. The Rams haven’t had a game yet, but they are perennial championship contenders and finished second in Class 5A last year.

“It’s kind of hard to know where we are after playing two really young teams that lost a lot of starters,” Larson said. “This next game will be a good challenge for us. I’m hoping the kids will get tested so they understand we need to get better to play well against more seasoned teams.”