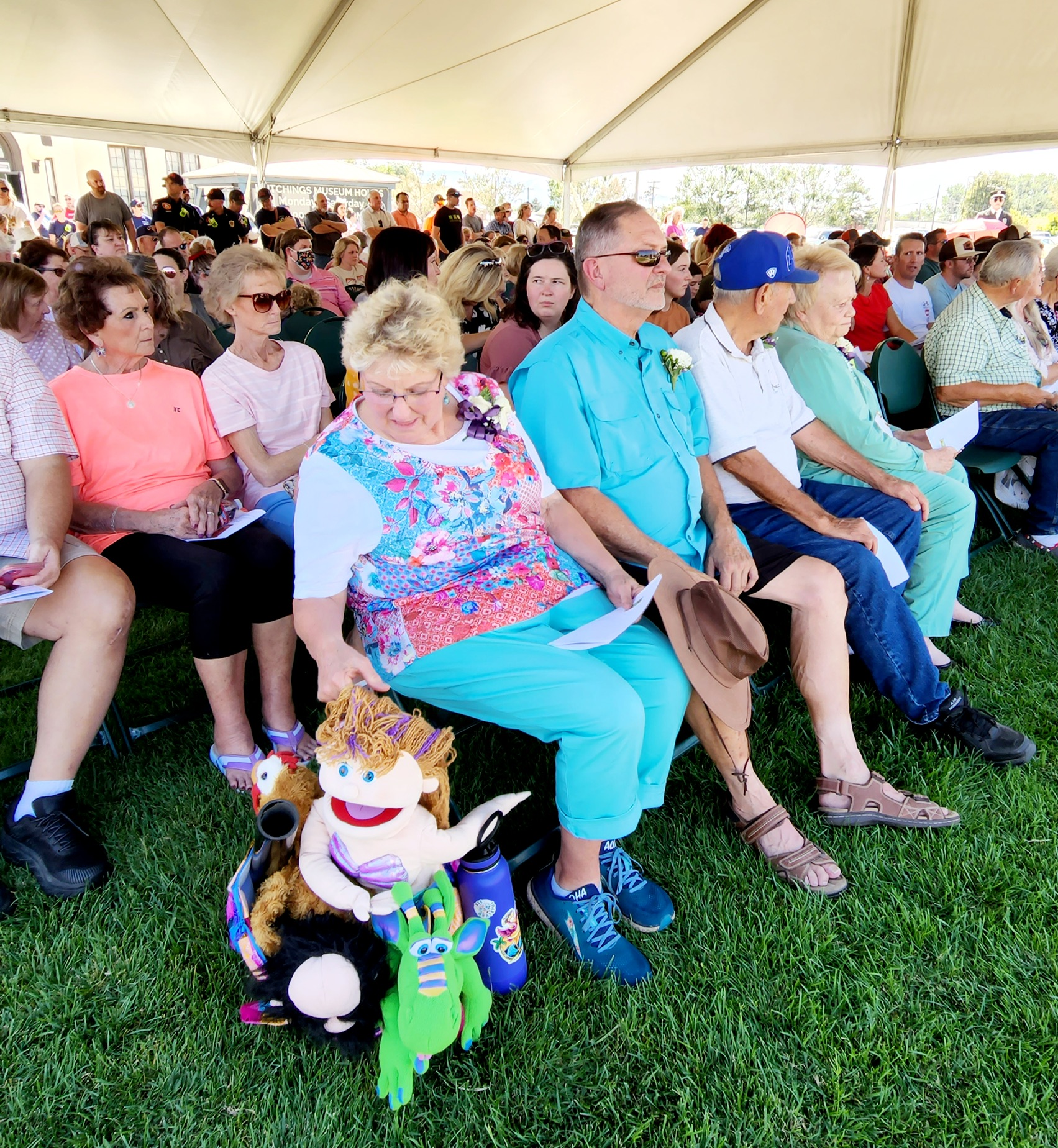 “It takes a small army of volunteers to plan, organize and pull off this event,” said Lara Bangerter, Director of Lehi Historical Society and Archives. “We start planning at the beginning of each year. We choose a theme and go from there.”

Hundreds of Lehi residents and many from surrounding areas attended the annual Labor Day celebration. The afternoon began with the Heritage Day Honoree parade and program. Nine couples were honored, Kim Kent and Rebecca Kirkham Beck, Wesley and Geraldine Dalley, Bob and Verlyn Doyle, Bret and Janys Hutchings, Roy (deceased) and Lois Littleford, Duane and Linda Scadden, Phil Asay and Joyce Gruwell Wasden, Mike and June Willes, and Rick and Sandra Evans Worthen. Special bricks will be engraved with the honorees’ names and placed on the Legacy Center grounds.

During the program, held on the lawn south of the Legacy Center, Bangerter announced the introduction of the Lehi Historical Marker Program. She thanked the Hadfield Family for a generous donation for the project, which will also be subsidized by a grant from Lehi’s PARC tax revenues. Thirty-six historical markers will be installed on sidewalks throughout Lehi over the next few years. Nominations for sign locations may be made at lehiistory.com. A brief explanation of the reasons for the marker will be required.

The theme for 2022 was Historic Homes of Lehi. Paintings of some of the historic homes of Lehi and memorabilia associated with each home were on display in the Legacy Center. Members of families whose homes were featured gave interesting details about their ancestral homes and those who built and occupied the homes over the years. Many of the homes have been lovingly restored. Brenda Grant shared photos of her residence, formerly the Anderson home, which housed seven generations of the Anderson family. The home is a beautiful example of the craftsmanship of homes built over one hundred years ago.

Lehi resident Kathleen Lott said, “It was amazing to see how some of the homes had been restored. It was also fun to reconnect with old friends and share memories,” Her husband, Bud Lott, had many old farm tools on display.

Bangerter mentioned Kay and Glade Peterson as tireless workers who spent countless hours making Heritage Day a success. “Each year, the number of attendees grows larger and larger,” she added.

A popular display associated with Heritage Day was the car show held in the Senior Center parking lot. Over forty old and new vehicles were showcased.

One car that drew significant attention was a 2021 Ford Mustang Shelby owned by 21-year-old Jake Snape. Snape said he had been saving to buy the car since he was 12. Immaculately restored pickup trucks, jeeps, a one-of-a-kind-hearse, a 1921 Model T. Ford, 1958 Thunderbird, and a 1968 Dodge Charger were a few of the highlights.

According to Bangerter, “As Lehi grows, it is important to pass on the history, peoples, places and practices of those who went before us to that we can stay true to our roots.”