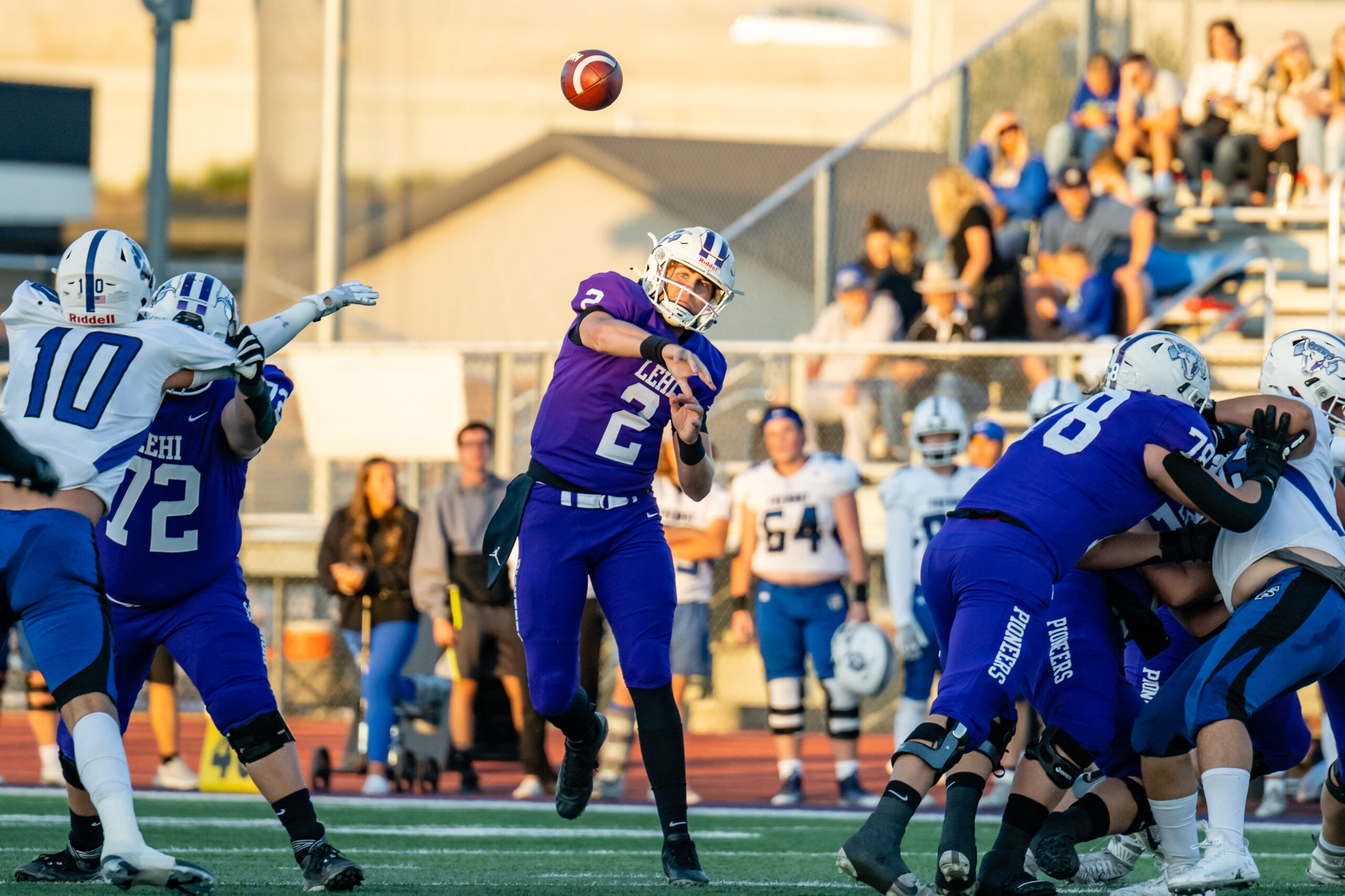 Despite hurting themselves early with penalties, the Lehi football team used a slew of turnovers and an effective offense to defeat Fremont 46-0 on Homecoming Night Friday (Sept. 16).

The Pioneers started the scoring on the opening drive of the game, though it was a psychological victory for the opponent to hold them to a field goal. Lehi converted a short kick in the second minute to post a 3-0 lead.

Later in the period, the Pioneers launched another drive punctuated by a long gain from senior running back Carson Gonzalez to the 1-yard line. From there, junior running back Kolose Latu took it in and Nate Shepherd’s PAT made it 10-0 at the 2:44 mark.

The Silverwolves went 3-and-out on their subsequent drive and senior Kadiyon Sweat’s return set Lehi up on their own 44 to start the next push.

That possession stalled on penalties, which plagued the home squad throughout the first half. However, Fremont didn’t make much headway against the fierce Lehi defense.

On third down, senior defensive back Nathan Andereggintercepted a pass and ran it back a long way for a touchdown, but it was called back to the Pioneer 49 on a penalty.

The first-down play also drew a flag, but the next two were successful as senior wide receiver Cooper Felix and junior wide receiver Jace John picked up a combined 20 yards on back-to-back receptions to get the ball to the Fremont 36.

Gonzalez made one of his shifty runs from there to reach the endzone, and Shepherd’s kick pushed the advantage to 17-0 with 9:26 remaining in the half.

It got worse for the visitors. In the next minute, senior linebacker Hema Katoa ran back a pick from midfield to add to the tally. It remained 24-0 to the break.

The Silverwolves got the ball to start the second half but were forced to punt after just one minute. Keeping the ball mostly on the ground, Lehi moved methodically to the 10-yard line.

On first and goal, senior quarterback Jackson Brousseau first rolled left but seeing nothing open, broke back around the right side and crossed the line himself. The PAT was blocked, so the score remained 30-0 with 6:32 left in the third quarter.

A punt out-of-bounds by the visitors after another stymied drive set the home squad up at the Fremont 37. The team reached the 4-yard line but was stopped there, so the ball went over on downs.

In less than a minute, the Pioneers added a safety to the score at the hands of senior defensive end Camden Williamson to make it 32-0 at the end of the third period.

Lehi added two more touchdowns in the final stanza on short runs by Latu and junior running back Isaiah Allen. The latter one was set up by a Sweat interception at midfield to complete the scoring and dominant defensive performance for the evening.