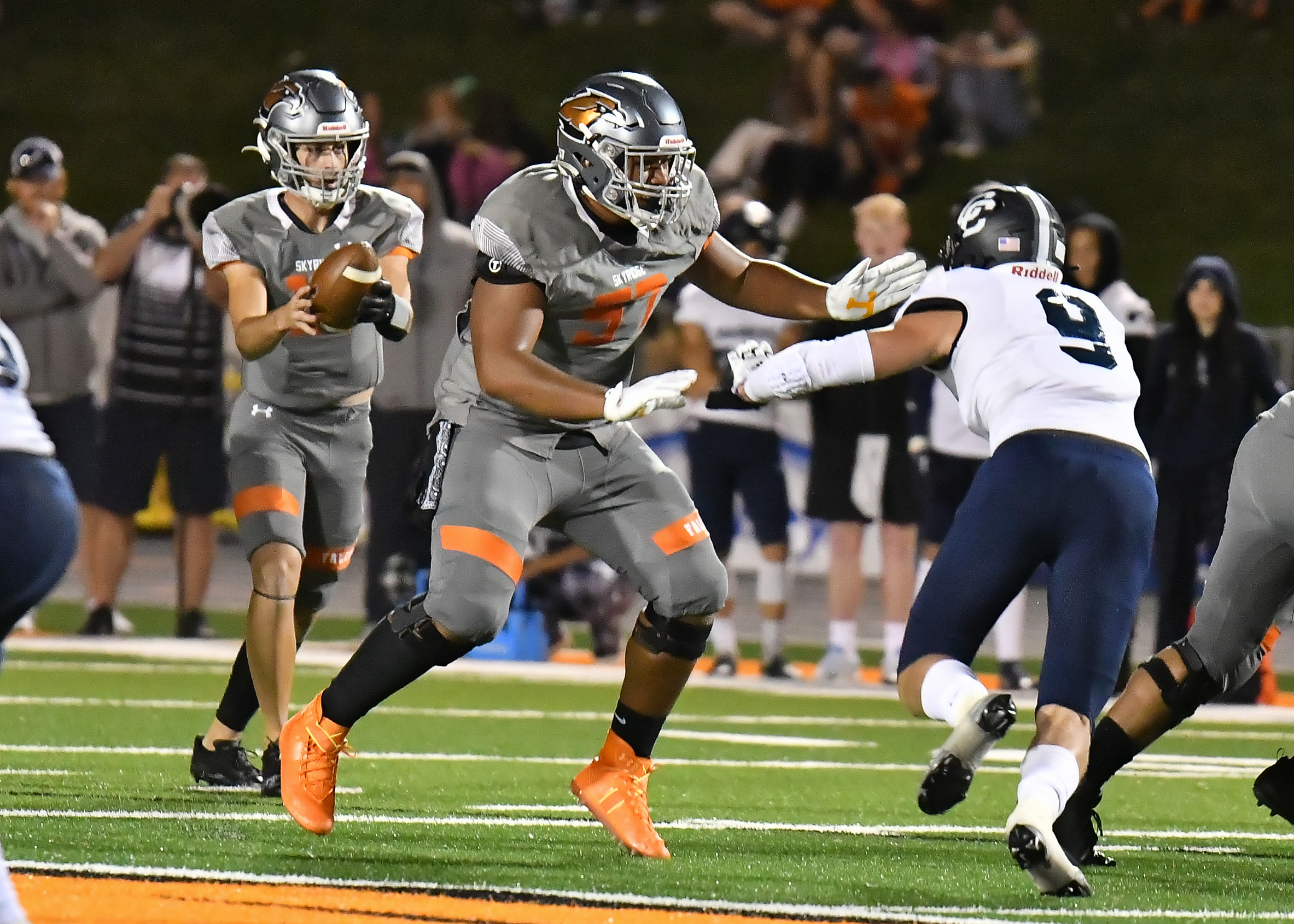 The Skyridge football team lost their first game of the season to Corner Canyon 21-17 in a heated grudge match between two 6A powerhouse programs on Friday (Sept. 23).

It was an error-filled contest in which both teams gave upmultiple turnovers. The Chargers played more disciplined on the night, committing fewer penalties and personal fouls to help them to eke out a hard-fought Region 4 victory over the Falcons.

Senior defensive back Brady Beers picked off the Corner Canyon quarterback which led to a short field and allowed the offense to cash in on a 4-yard touchdown run by junior running back Carter Sheffield.

Senior safety Saxon Higbee’s fumble recovery on the 19-yard line led to a quick score by sophomore linebacker Jackson Fenton playing the other side.

That gave the Falcons a 14-0 start in the contest in the first quarter, but the Chargers rallied to score two touchdowns in the second quarter on sustained drives from short fields forced by the Corner Canyon defense.

Skyridge added a 42-yard field goal by senior kicker Ian Keeslar at the end of the half to take a 17-14 advantage into the break.

Neither team put points on the board in the third quarter, though the home squad had the best chance but missed on a field goal try.

Early in the fourth, an interception by the Chargers set up the game-winning touchdown. The teams traded the ball several more times after that but neither was able to score again before the clock ran out.

Senior cornerback Smith Snowden illustrated why he is a highly-recruited athlete by covering sideline to sideline and jumping an out route for another pick on the season.

“I got the pick tonight after lots of film study prep,” Snowden said. “I knew that play was going to come and it worked out in my favor. I feel like we shut them down on offense and limited scoring.

“It was the little things that kind of made things fall apart at times,” he continued. “The little things impact the bigger things in the game. We will have the chance to play Corner Canyon again for sure this year and we will improve,” said Snowden.

The Skyridge offense appeared to struggle against Corner Canyon’s 3-4 alignment and committed several costly penalties and personal fouls at crucial moments during the game.

Junior wide receiver La’alea Kalama had several clutch catches, converted first downs and had a 96-yard catch and run called back by the officials that could have been a turning point in the game.

Skyridge Head Coach Jon Lehman said, “We fought hard tonight. I don’t believe we played a clean game. We made too many unforced mental errors. Corner Canyon is a good football team and when you make those unforced errors, they take advantage of it.

“Offense played hard and the line played physical. Defense had a good game. It was a good matchup tonight and I think we played really well,” he added.

The Falcons will turn their focus to the Lone Peak Knights as they travel for another rivalry contest on Friday (Sept. 30) at 7 p.m.