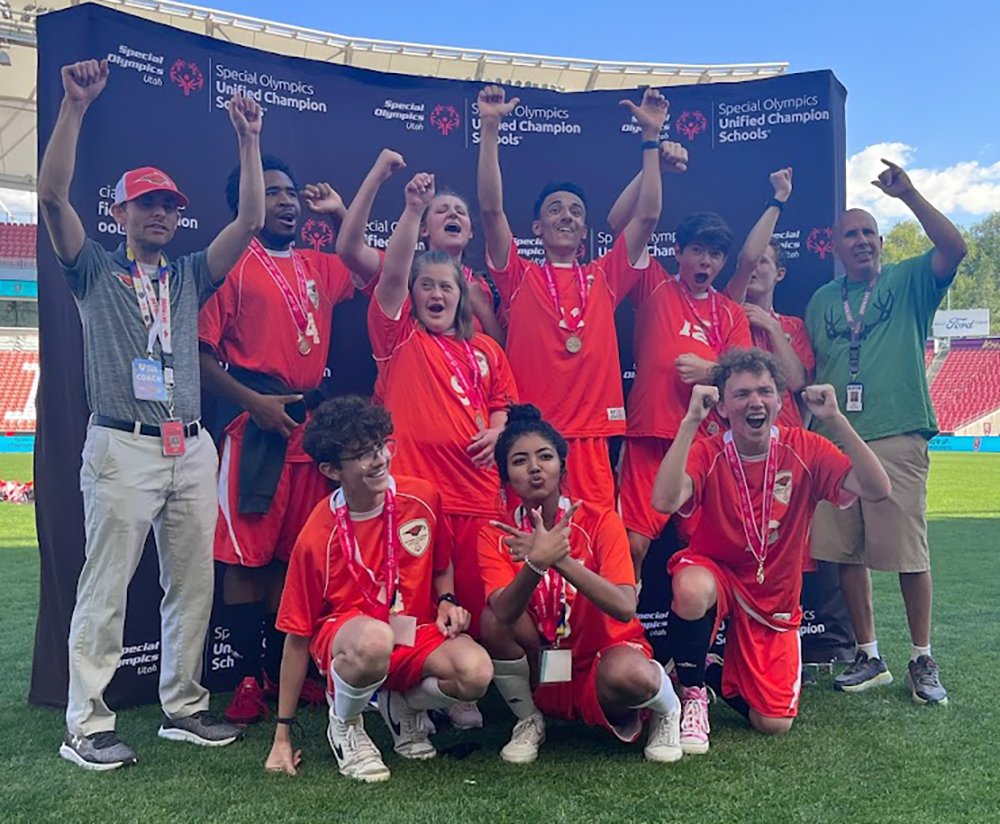 Unified Sports combines people with and without intellectual disabilities on the same team. The program was inspired by a simple principle: training together and playing together is a quick path to friendship and understanding.

The national Unified sports program is included in 24schools across the state and is an initiative of Special Olympics Utah in partnership with the Utah High School Activities Association, which overseas extracurricular programs at all member schools in the state.

Inclusion is a part of the school culture at Skyridge, which greatly supports the Unified athletes.  “The staff at Skyridge work as a team to promote inclusion and make sure their students with disabilities are included with clubs, sports, activities and everyday life,” said Skyridge Assistant Principal Chad Wiet.

The first half of the championship game for the Falcons was a defensive battle with a tie game at 0-0. In the first minute of the second half, Salem Hills struck first with a goal.

The Falcons answered with a rousing score by Nate “The Great” Moodie who made a statement by scoring the first two goals to give Skyridge a 2-1 lead.

Isaac Ramos put the ball in the back of the net for the final score of the game and a 3-1 victory which earned Skyridge High School its first Unified soccer state championship.

Lindsey Larsen, Miss Utah 2022 and Skyridge alumnus,attended in the soccer championship event along with Miss America Emma Broyles and Cox.

Larsen is a Special Olympics Dancesport teacher and “loves seeing all the opportunities provided for the athletes involved in Unified Sports across the state.

“The Unified Sports program brings both people with intellectual disabilities and those without together. The athletes develop friendships with each other and with peer tutors as they partner together and support one another,” said Larsen. “The kids really touch your heart.

“The Falcons won the gold medal as they played together and cheered each other on with excitement. The entire event was so positive, and it provided such a loving and caring environment for everyone,”

“I love Skyridge High School. The students are so inclusive and supportive of each other no matter their differences,” she said.

Honorary Miss Utah Emma Cheney played in the state championship game. Larsen said, “I have developed a lifelong friendship with Emma because of this amazing program.”

The teachers who work to make the program a success at Skyridge are Jake Figueira, Jess Gifford, Rick Marino and Ryan Roberts.

“The teachers have been and continue to be strong advocates in the development of the Unified program at Skyridge, which is evident in their love for students and helping them find value and joy in movement and being a part of a team,” said Wiet.

He added, “The partnership and support from the UHSAA and Special Olympics makes these opportunities possible. This support helps to develop and sustain Unified programs throughout the district. We are grateful to them for their support.”