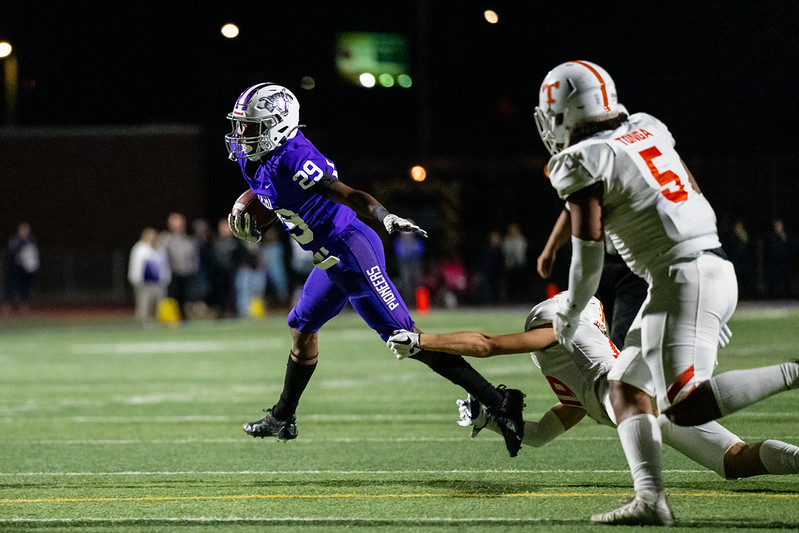 The Lehi football team came from behind twice in the final 13 minutes to win the Clash of the Titans Thursday (Oct. 6) at home over Timpview 28-24 and thus get the inside track to the Region 8 title.

This was not only the local television game of the week, but MaxPreps selected it as one of the top 10 games in the nation this week, and it didn’t disappoint.

The Thunderbirds got the ball first and were able to move it fairly effectively on the ground, but the Pioneer defense stiffened when Timpview reached the red zone.

The Thunderbirds elected to try and convert on a 4th-and-6 but were stopped by senior defensive end Isaac Terrell at the 20-yard-line and the ball went over on downs.

The next two plays were handoffs to senior running back Carson Gonzalez, and he took a hit after a nice gain on the second one which knocked him out of the game. With junior running back Kolose Latu already unavailable, the drive stalled and the Pioneers had to punt.

The ball was downed at the Lehi 17. A big stop by senior linebacker Blake Jenkins on third down got the ball right back to the Pioneers at the Timpview 43.

Enter freshman running back Devaughn Eka, pressed into service as the next man up. He and senior tight end Jace McGary moved the ball for a couple of first downs, and the Brousseau brothers connected again, this time for a 19-yard touchdown.

Senior Nate Shepherd’s PAT gave Lehi their first lead at 7-0 with 2:56 left in the first quarter.

The ball traded hands a few more times before Timpview was able to put some points on the board. The Thunderbirds were still held out of the end zone, but they kicked a 40-yard field goal with 8:56 left in the half to close the gap to 3-7.

With 25 seconds remaining to the break, the Thunderbirds used a short field of their own to put a touchdown on the board, but senior defensive back Nathan Anderegg blocked the extra-point try, so the score was 7-9 at the break.

Lehi wasn’t able to do much on their first possession of the second half but got off a great punt that was downed at the 15-yard line. On the first play from scrimmage, Timpview’s star running back broke an 85-yard run for a score to extend the lead to 16-7 less than two minutes into the third period.

The defenses prevailed for most of the rest of the quarter as third-down conversions were hard to come by for both teams. The Pioneers missed a field-goal try but later sustained a drive towards the end of the period after senior Kadiyon Sweat returned a punt 23 yards to the Timpview 40-yard-line.

Lehi elected to go for it on 4th-and-2 inside the red zone. Jackson Brousseau faked a throw which caused the defense to jump and then found senior wide receiver Kolton Tanner wide open in the back corner of the end zone for the score. The PAT reduced the gap to 14-16.

During their next series, the Thunderbirds threw to try and pick up a first down on 3rd-and-4, but senior linebacker Keahi Nawahine read the play perfectly and made an interception, returning the ball to the Timpview 16-yard line.

Junior wide receiver Jace John got it to the 1-yard line, and Eka took it over from there to push Lehi back in front 21-16 with six seconds left in the period.

The Thunderbirds ate up the clock on their next possession and scored on a reverse from short distance to retake the lead 24-21 with 4:06 to play.

Runs by Eka and key receptions by sophomore Mays Madsen helped the Pioneers to move quickly down the field and penetrate the red zone once again. Tanner snagged his second TD catch of the night, this one for 15 yards, and the crucial Shepherd PAT gave Lehi the four-point advantage at 28-24.

This forced the visitors to have to go for a touchdown. They moved the ball and managed the clock well, but eventually they faced a 4th-and-4 near midfield with 28 seconds left.

It looked like the quarterback might be able to fall for the first down, but his trajectory was changed by senior linebacker Hema Katoa, and he came up short. Lehi took a knee and the sellout crowd erupted in a jubilant celebration.

“When you play someone of their caliber and with all the things we went through this week, I’m so proud of the kids for sticking together and showing some grit,” said Coach Ed Larson.

“I can’t say enough about my assistant coaches and the game plan they put together. It was just awesome,” he continued.

“This game we had a potpourri of guys stepping in because of injuries,” Larson said. “Obviously the interception was huge,and the defense overall did a great job. Everybody had a little bit to do with this win tonight. With a play here and a play there, itmade all the difference.”

The Pioneers will finish the regular season on Wednesday (Oct. 12) when they honor their seniors as they host Orem at 7 p.m.