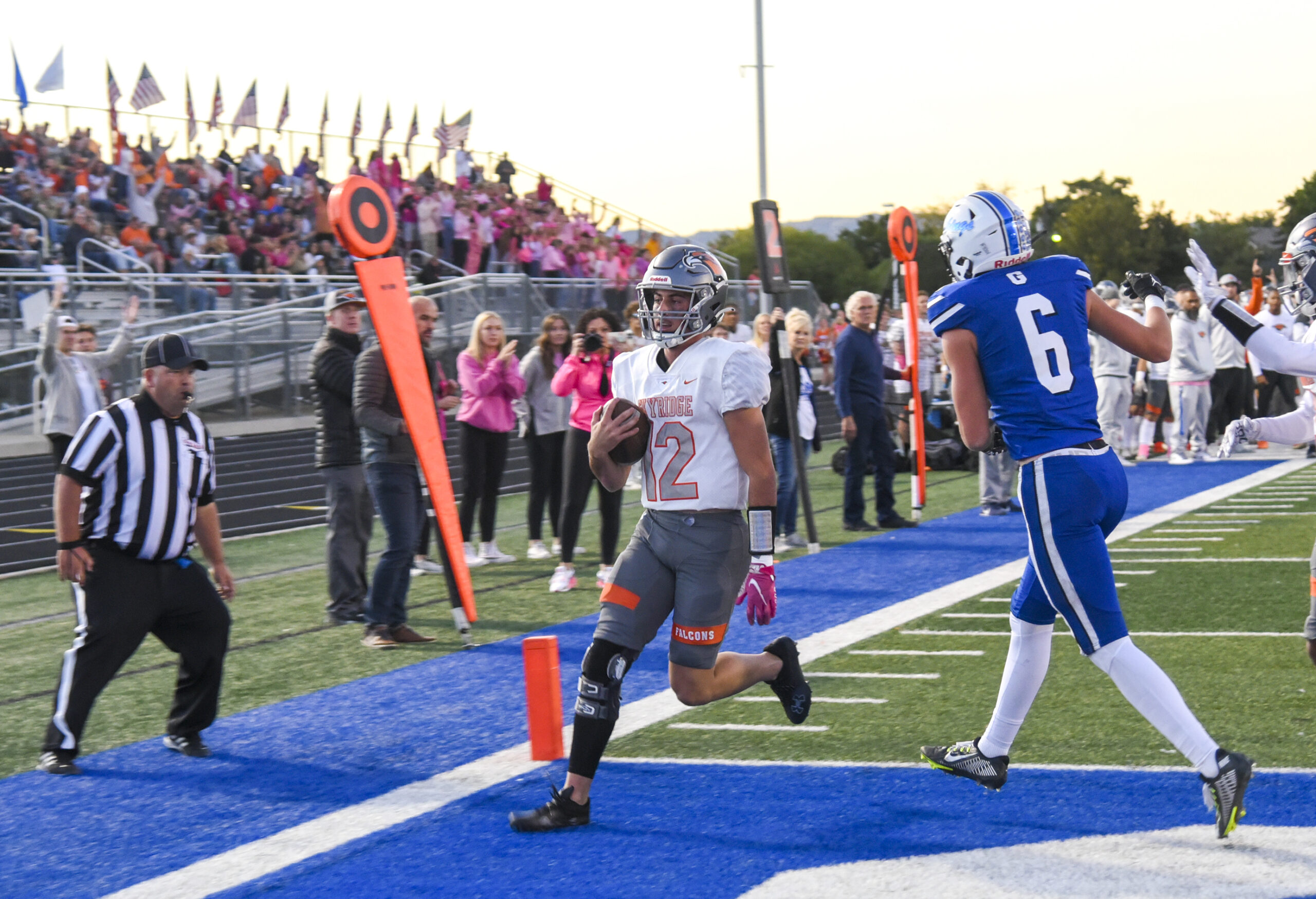 In a traditionally heated rivalry game, the Skyridge football teamdecimated the Vikings of Pleasant Grove in a 42-0 blowout win. The game was never in question as the Falcons dominated in all phases of the contest.

Junior quarterback Trent Call scored an early touchdown with an 11-yard scamper. Senior linebacker, Collin Sheffield continued the Falcon domination with a 53-yard pick six on an errant Viking throw to the flat.

Senior receiver Kyle Valdez quickly followed up with a 13-yard diving catch in to the endzone thrown perfectly by Call.

“As a team we were all very prepared for this game,” Call said. “We all came out and had fun but also did our jobs tonight. I have tried to do my job well and the team is helping me out a lot.”

Skyridge Head Coach Jon Lehman said, “Collin Sheffield, every week it seems like he is in passing lanes and making big plays. He’s scoring touchdowns as a linebacker, which is pretty impressive. He studies and prepares and is incredibly smart with a 4.0 GPA. I am pleased with how he leads us in big plays.”

Junior running back Carter Sheffield scored the next Falcon touchdown on an 85-yard catch and run out of the backfield.

After Collin Sheffield’s second interception of the game, junior receiver La’akea Kalama caught a pass across the middle and took it to the house for a 50-yard reception to end the half with a 35-0 lead.

“Collin and me, growing up, always dreamed about playing together and it’s cool that we can make plays together on the field,” said Carter Sheffield. “It was great to play with the energy tonight and win as everyone executed very well.”

Lehman said “It was a really good first half. The opening drive was good. Trent led us down for a touchdown and was really efficient in his reads. Offense executed really well from the start.”

The final touchdown was scored by Kalama on a 7-yard run set up by a long pass from sophomore quarterback Brock Parrish to senior receiver Cannon Jensen.

Lehman said, “I was really proud of our guys. They drove the ball 50 yards on the first drive and we settled in and stopped them on fourth downs. They attempted to kick a field goal and bobbled the snap, so I was proud of how our guys hung in there on the first drive.”

He added, “We created a couple of takeaways in that first and second quarter and were able to open it up a little bit. I’m proud of the execution in the first half and how the guys finished all the way through to the end.”

The Falcons will face another powerhouse rival as they take on the American Fork Caveman in their final Region 4 game to end the regular season on Oct. 12 at home.