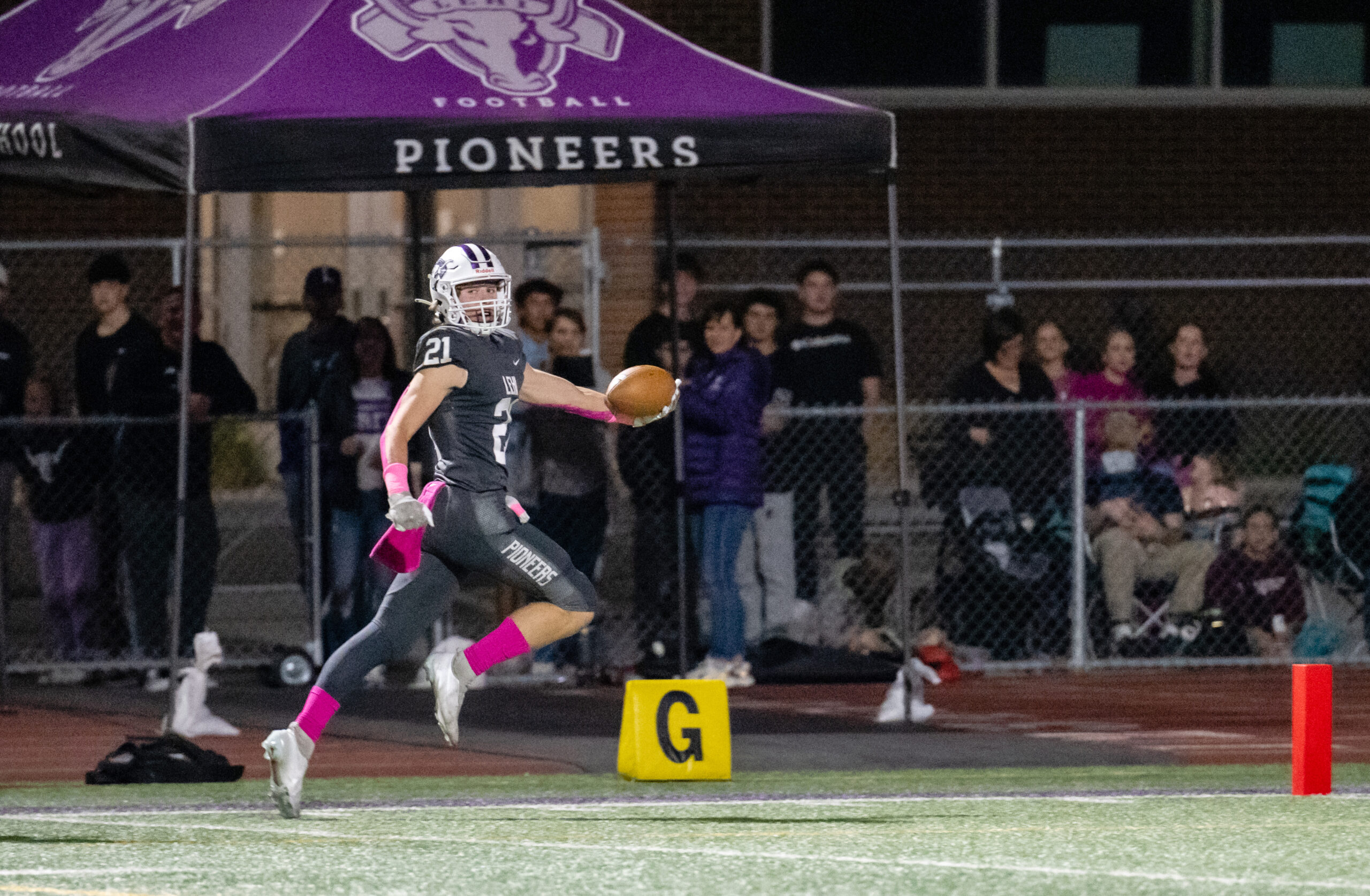 The Lehi football team got off to a slow start against Orem on Senior Night Wednesday (Oct. 12), but the Pioneers scored 28 unanswered points beginning late in the second period to take control of the game and earn a 55-21 victory to secure an undefeated Region 8 crown and finish the regular season.

The teams dueled scoreless through the first quarter, but senior tight end Jace McGary scored on a 1-yard run early in the second to get Lehi on the board.

The sterling Pioneer defense forced a quick end to the subsequent Tiger possession, and Lehi quickly added to the advantage as senior quarterback Jackson Brousseau connected with junior wide receiver Jace John for a 43-yard touchdown.

The PAT had been missed after the earlier score, so Lehi went for the two-point conversion and completed it from Brousseau to McGary.

Orem then got its offense on track and sustained a drive which resulted in a touchdown to cut the deficit in half. However, it didn’t last long as Mr. Do Everything, Kadiyon Sweat, returned a kick 88 yards to extend the margin again. Senior Nate Shepherd added the PAT to make it 21-7.

The Tigers were able to answer that with another touchdown to close the gap to a single score again with just about a minute leftin the half.

The short clock did not prevent the Pioneers from boarding more points before the break as senior tight end Kobe Moore pulled in a 7-yard touchdown pass to make it 28-14 as the teams headed to the locker room.

The rout was on from there. The Pioneers added three more touchdowns in the third quarter and gave up nothing. The first came courtesy of freshman running back Devaughn Eka, who capped a one-minute drive with a 23-yard run.

The next Tiger possession ended in an interception by senior defensive back Nathan Anderegg, but this time Lehi punted back the ball.

Orem then mounted a six-minute drive starting on their own 9-yard line and were nearing the red zone when Sweat made a pick and returned it 77 yards to further pad the lead to 42-14.

The next Tiger possession ended the same way as sophomore linebacker Paul Latu got another interception and Moore took a 16-yard reception across for another touchdown less than a minute after the turnover.

Each team scored once in the fourth quarter, with Lehi’s coming on a 2-yard pass from sophomore quarterback Jett Niu to senior wide receiver Fernando Ruelas. The PAT kick missed so the score ended up 55-21.

Despite their unblemished record, the weakness of their opponents this season means the Pioneers are unlikely to get the top spot in the final 5A RPI index, which will be released Saturday morning along with the tournament brackets.

Nevertheless, they have earned a bye in the first round and will have home-field advantage after that until the playoffs move to the neutral tournament venues.