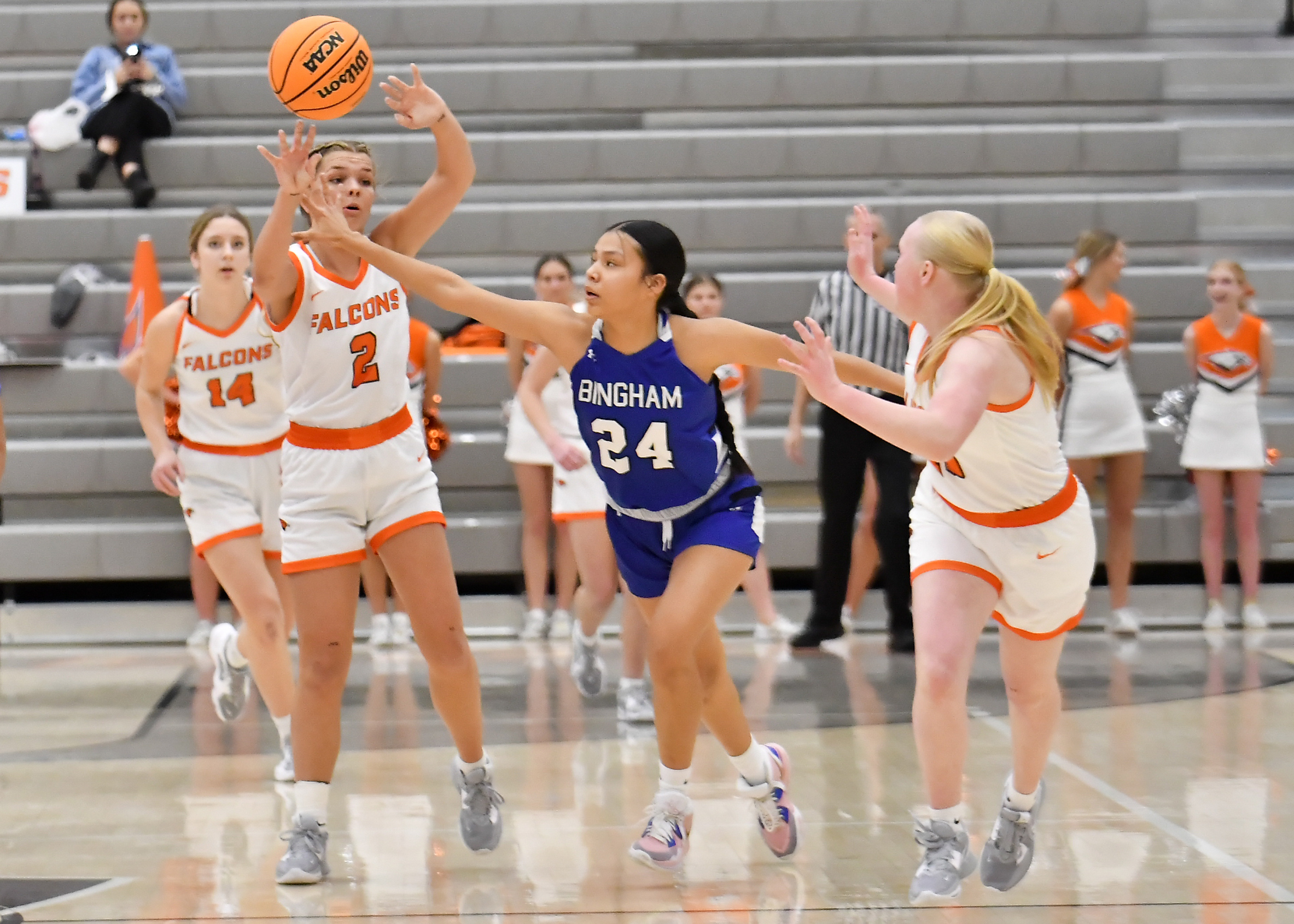 The Skyridge girls basketball team picked up a pair of non-region victories last week in their final contests before the start of region play.

“We are happy to get a couple of wins against solid teams from Region 3,” said Coach Shaylee Nielsen. “They were good games for us to prepare ourselves for region.

“We were short players this week after finding out Bella Sika tore her ACL and Merceius Milli has been out with an injured wrist,” she continued.

“I am so proud of our girls for the way they have responded and stepped up to help fill the void. We had girls play heavy minutes and some girls step into new roles and they have done a great job,” Nielsen said.

The Falcons poured it on early as they built a 21-7 advantage over the Miners in the first quarter. The teams played more evenly the rest of the way, but Skyridge maintained a torrid scoring pace to stay well out in front. It was 35-23 at the half and 53-39 at the end of the third period.

Junior guard Cambree Blackham sparked the win with 21 points,including a perfect 9-for-9 from the line, along with fourrebounds and four deflections.

“Against Bingham, freshman Ellah Oeser was a bright spot for us stepping up and scoring 19 points in her first-ever start,” the coach said. “Shae Toole was huge defensively grabbing sixsteals and continuing to be our disruptor. It was a great team win and everyone contributed in different ways.”

This was a back-and-forth battle. The Silverwolves had a slim 12-10 advantage at the end of the initial period but used a big run in the next one to forge ahead 27-15 at the break.

The Falcons countered with a surge in the second half to outscore the home squad 29-17. The teams were square at the end of regulation, but the visitors outscored Riverton 14-8 in the extra period to close out the win.

Blackham netted 25 points including three triples and 10-of-12 at the line to go with five assists, two steals, two blocks and five deflections.

“We had quite the battle with Riverton on Thursday and were fortunate to come out with a win in overtime,” Nielsen said. “I have to give Riverton a lot of credit, they were well prepared and played well. We were out of rhythm and didn’t follow defensive assignments in the first half.

“We have been averaging about 70 points a game and only had 15 points at halftime,” the coach went on. “I’m really proud of our team’s response coming out of halftime. They made adjustments and played resiliently the entire second half.

“Cambree Blackham led our team in points and assists but most importantly was our vocal and emotional leader all night,” Nielsen said. “She is really playing well and is stepping up to help out where we miss Bella.

“Shae and Abby were huge defensively for us in the second half and created a lot of opportunities for us,” she added.

“We’re happy to be going into region play after being battle-tested and having gone through adversity and continually growing and improving. We start out with Westlake and Lone Peak so we will need to be sharp and well prepared mentally,” the coach concluded.