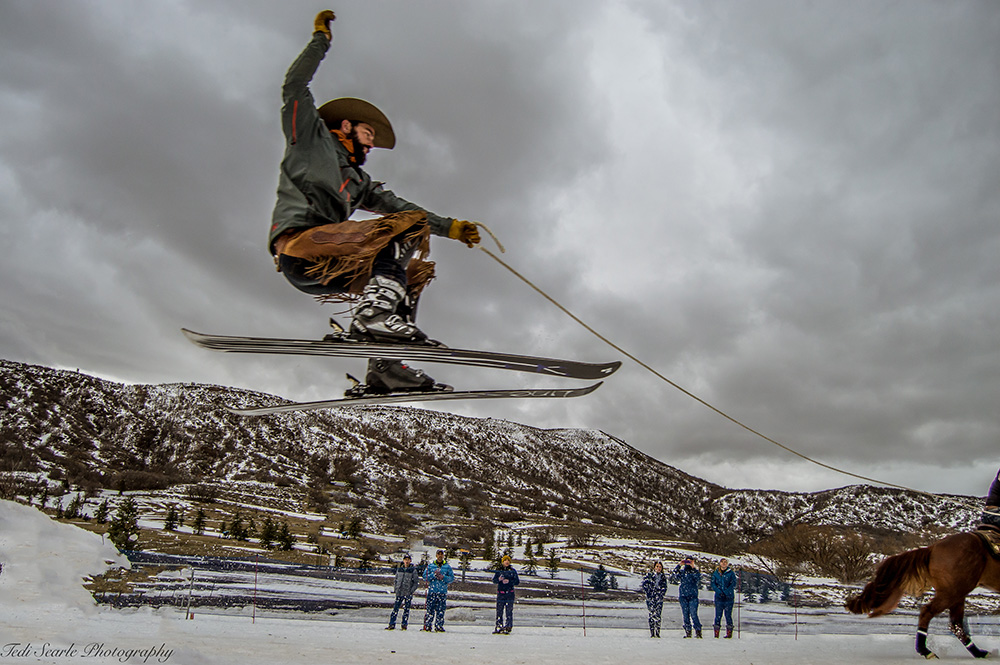 Skijoring, a Norwegian word meaning “ski driving,” is a winter sport where a person on skis is pulled by a horse, a dog (or dogs), or a motor vehicle. On Friday and Saturday, February 18-19, Lehi cowboy Mark Cutler participated in the first-ever skijoring competition held in Midway, Utah, at Soldier Hollow.

The participants and the crowd at the skijoring event looked odd– skiers in Olympic-style bibs and helmets alongside horses and cowboys decked out in chaps and cowboy hats. Horse and rider raced down the middle of the course while the skier held onto a rope (similar to a water skier behind a boat), navigating the jumps and collecting the rings. The teams were timed, and seconds were added if the skier missed a jump or failed to collect all the rings. If the skier let go of the rope, even if they were still able to cross the finish line, their time was not recorded. Horses were limited to two runs, skiers could go up to four times with different horses pulling them, and riders could be on as many teams as they wanted.

Mark Cutler found out about the event from several different people who thought he’d be interested. Cutler shoes horses for Rocky Mountain Outfitters, the sponsor of the skijoring competition, as well. After watching a few YouTube videos and one or two tries on the practice course with his brother Nick skiing behind, Cutler entered the competition.

The skijoring course was just over 600 feet long and started with two jumps on the right followed by two hanging rings the skier was to grab and hang onto all the way to the finish line. Then the skier was to swing to the left of the horse and rider for another jump and quickly back to the right for the final two rings. Cutler brought six horses the first day and four the second day. None of the horses in the competition are in peak shape, but the faster the horse, the better the time. Cutler was the rider on one team with his brother Nick skiing. During his first ride on Saturday, Nick Cutler crashed at the final jump and ended up hurting his knee. Mark was the skier on two other teams and didn’t change out of his riding gear, getting into his 30 year-old, “ghetto” skis in fringed chaps and Wranglers. Cutler was much more comfortable as a rider, but he learned important strategies being the skier in skijoring.

After the skijoring events there was a Big Air Competition. Skiers were pulled over a jump, then they let go of the rope to see how far they could get in the air. Mark Cutler ended up taking third place, flying 43’7”. He never landed on his feet, though, which made for a painful night’s sleep. Cutler is addicted, though, and already planning for next year. He’ll pull a more experienced skier and he’ll get to use all his hard-earned knowledge of skijoring in 2018.