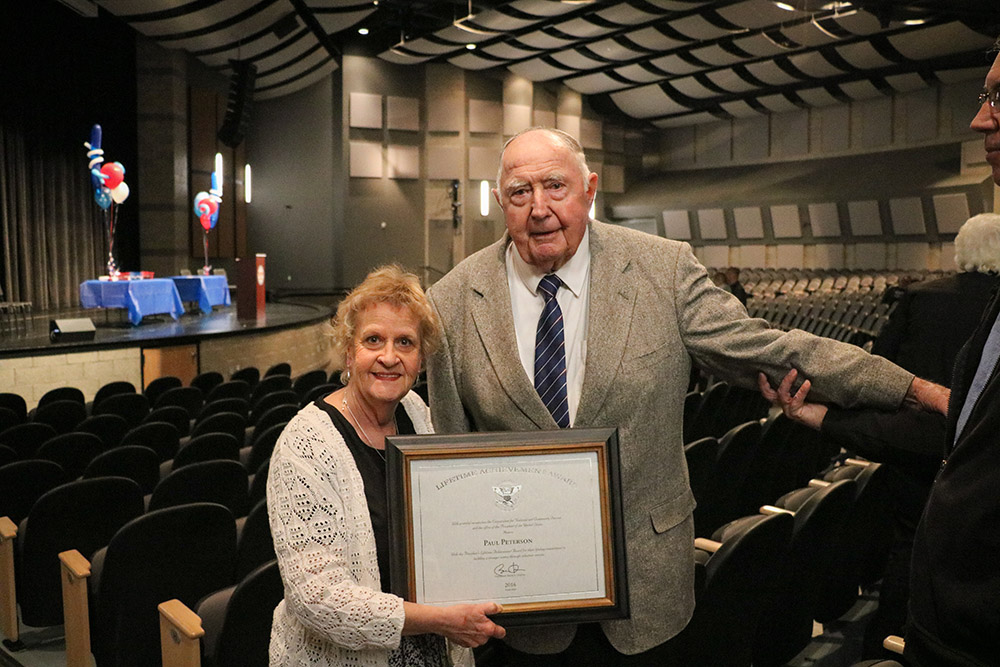 Some leaders are visionaries, some are decisive, some are great negotiators and some have just plain common sense. All these attributes could describe Lehi’s Citizen of the Year, Paul Peterson. On Thursday, March 23, Peterson was given the award by Mayor Bert Wilson in a ceremony at Skyridge High School. In recent years, Peterson is largely responsible for the acquisition of water in Lehi City.

In 1952, Deer Creek Reservoir was constructed to provide water for the citizens of Utah County. The Metropolitan Water District was organized to provide a systematic way of distributing the water. Virgil Peterson, Paul’s father, along with Dale Hunter and Morris Clark were members of the board. Ron Smith, a member of the city council was also on the board. Each city was required to purchase shares of Deer Creek water. Lehi bought 500 shares. These water shares, of course, became extremely valuable. As Lehi grew, developers were told they needed to bring water with them. Developers would buy water from the Metropolitan Water District and turn it into Lehi City thus the city became owners of this valuable resource.

This plan has provided Lehi City with water for many years. Paul remembers his father telling him, “Lehi needs water.” If anyone wants information about water in Lehi, they are most often told to contact Paul Peterson.

In 1992, Paul took his father’s place on the Metropolitan Water Board. Paul has held this position until just a month ago when Paul’s son, John, took his place. For the last twenty-five years Paul has negotiated, advocated for, and preserved water rights for Lehi City. Lehi’s amazing growth can partially be attributed to Peterson and Lorin Powell’s ability to provide water when needed.

These are just a few of Peterson’s outstanding accomplishments:

Sold Lehi Irrigation water shares at 2.5 acre feet per share in exchange for water from Salt Lake County at 5.11 acre feet a share, doubling the amount of water for use in Lehi.

Jordan River P.I. reservoir, in its last stages of completion, was Paul’s idea.  Because of his familiarity with the springs and the nature of the land in this area what he envisioned is becoming a reality.

Instrumental in buying land in Heber for Lehi Girls Camp.

Oversaw the maintenance and operation of the Lehi Stake Welfare Farm in southwest Lehi. It was the only time the farm operated in the black.

This is not a comprehensive list. Paul, not one trump his own accomplishments, has been a caring and compassionate neighbor and friend. When a young mother in his ward was living in humble circumstance with five young children, he, along with several others, built the family a home.

He and Doris, his loving companion for over 66 years, raised four children, Paula, John, Gina, and David. Doris passed away in 2014. Paul adores his grandchildren and finds time to teach them valuable lessons he learned from his father, hard work, honesty, and service.