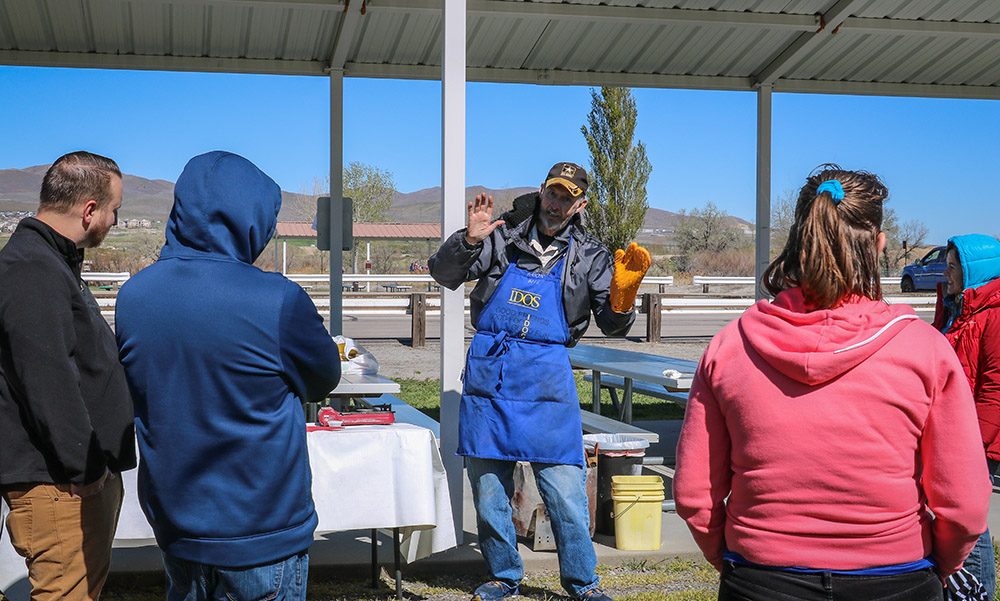 The International Dutch Oven Society had their spring convention last Saturday, April 27, at Willow Park. Members of the IDOS brought food to share and taught classes on all things Dutch oven. The wind and freezing temperatures kept people away, but those who came were richly rewarded with incredible food and great tips from the experts.

Ted and Connie Cromer are part of the Storm Mountain Dutch Oven group. The Cromers took up Dutch oven cooking after retiring because they wanted to do something together. The food they cooked for scout camps and other group camping trips was so good that friends suggested they enter the World Championship Cook Off. “Utah is mecca for Dutch oven cooking,” said Ted Cromer. People from all over the world come to the yearly Dutch oven cook off at the South Towne Expo Center.

Carol Hokanson of Saratoga Springs was an exceptional home cook before she became a World Champion Dutch Oven cook. The first time she saw a Dutch oven cook off was at a park in American Fork during Steel Days many years ago. She wanted to enter that contest, but she was told she needed to be a member of the IDOS first. “People were so good to teach me when I was a novice,” said Hokanson. “It’s not like barbeque – we share all our secrets,” added Ted Comer. Hokanson competed in Dutch oven cook offs for 12 years before retiring in 2012. She still comes to the conventions and brings her award-winning recipes to the pot-luck suppers.

“I had all the ingredients for my Pear Almond Cranberry Pie except the Crisco, but I had lard, so I used that,” Hokanson said of the to-die-for pie she brought to the convention. She also brought enough copies of the recipe, with hand-written changes, to share with her fellow Dutch oven enthusiasts. “I didn’t become a pro overnight. I burned a lot of biscuits and I got a lot of help,” recalled Hokanson.

It wasn’t just Dutch oven cooking at Willow Park, Chimney Cakes of Transylvania was also at the convention showing off their traditional Romanian dish that uses dough wrapped onto a wood cylinder and cooked over charcoal. Once the dough has been cooked and removed from the cylinder, steam comes out the top making it look like a smoking chimney.

The die-hard outdoor cooks at the International Dutch Oven Society Convention and the cold, windy day combined to make camping and eating good food outside sound and taste like the best thing in the world.

In a small bowl mix sugar, ultra gel, nutmeg, ground ginger, salt and cinnamon together until well blended. In a separate, large bowl, blend together pears, cranberries, almonds and almond extract. Combine the two mixtures and gently toss until mixed. Set aside.

In a large bowl, blend flour, salt, and shortening together with a pastry blender until the mixture resembles coarse crumbs. In a separate small bowl, whisk together the egg, water, and white vinegar. Add the liquid mixture to the crumbly mixture and gently stir with a fork until it forms a ball. Gather the dough into your hands (DO NOT KNEAD) and divide it into two balls, one slightly larger than the other. Refrigerate the small one until you’re ready to roll it out.

Roll out the smaller ball of dough into an 11-inch circle and cut into ½ – ¾ inch strips for the lattice top, then arrange the lattice top over the pie filling in the Dutch Oven.

In a small bowl, whisk the egg and water together for the egg wash. Brush the egg wash onto the lattice top of the pie. Garnish with sugar crystals if you desire.

Bake at 425 degrees using 12 coals on the bottom and 15 on the top of Dutch Oven with a windshield around the bottom, for about 25 minutes or until the crust is golden brown and pulling away from the sides of the Dutch Oven. Cool and then lift the pie out using the parchment strips.

Parents’ cause leads to AED placement at local school