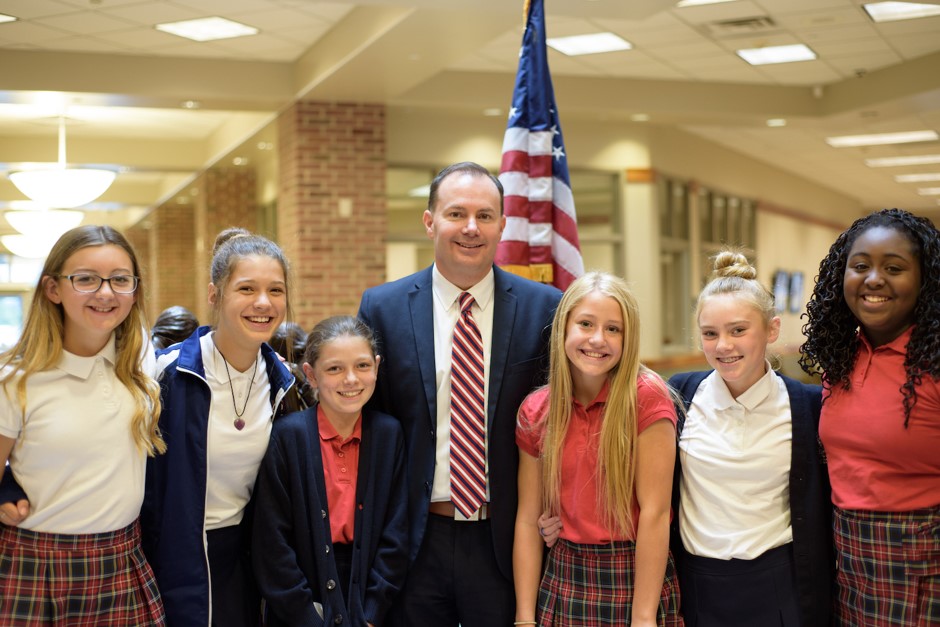 Students at American Heritage School (AHS) in American Fork were entertained and inspired by United States Senator Mike Lee last Thursday, September 21. He addressed the students in grades 5-12 along with parents and faculty as part of the school’s celebration of Constitution Day, which is officially recognized on September 17. Approximately 120 of the school’s students are from Lehi.

Senator Lee engaged the students with stories ranging from humorous personal accounts to inspiring tales about America’s founding drawn from his book “Written Out of History.” The accounts illustrated his overriding theme: “If we’re to live in a land where we benefit from the protections of the U.S. Constitution, we often have to assert that which is rightfully ours. Even when – especially when – it’s difficult.”

He had the children laughing as he told what it was like to be the youngest member of the U.S. Senate when he was first elected in 2010. The first challenge, he explained, was getting into the Senate chamber.

“In order to get in you have to walk past these very heavily armed guards, and when I first got there they didn’t think I looked like a senator,” he said. So the guards would try to direct him away. It became very tiresome to have to stop and pull out his official Senate ID every time he needed to enter the chamber, so he finally sought a colleague’s advice for how to fix the problem.

The colleague reminded him of a lapel pin he had been given on the day he was sworn in, a lapel pin which Senator Lee had tucked away somewhere because he doesn’t typically wear such things. His friend told him that only senators had that pin and that if he wore it, the guards would let him in.

“And he was right!” the senator exclaimed. “I put it on and it worked almost every single time! I became so fond of the pin that I wear it all the time when I’m Washington, and I’ve even named it. I call it my ‘Sorry Senator pin,’ because if the police don’t recognize me I just point to the pin and they say, ‘Sorry, Senator, you can come in.’”

He had found a way to assert his right to be in the Senate chamber.

Senator Lee encouraged the students to follow the same pattern and recognize areas in which they might need to assert their rights under the U.S. Constitution. He explained that parts of the Constitution “are becoming neglected, forgotten, written out of history, you might say, to the point where it’s becoming far more difficult for us to say all of our rights are still intact.”

As a preface to the historical accounts of individuals who influenced the founding of the U.S., he described the Constitution as a document designed “to protect us from the bad things that inevitably happen when a few people get a whole lot of power.”

This led to a discussion about what the senator described as the vertical and horizontal axes of power established by the Constitution. The vertical axis – federalism – owes its origin in part to the influence of Canassatego, an Iroquois chief of the 18th Century. Canassatego impressed Benjamin Franklin with his account of how the Iroquois confederacy operated, leading to the establishment of independent state governments which were designed to coordinate common interests through the federal government, rather than being subject to it.

Another historical figure he highlighted was Mercy Otis Warren, a political opinion writer of the Revolutionary era. She warned about the possibility of the branches of government not honoring their Constitutional boundaries.

“She said, ‘There’s a real risk here that, in the end, you could end up having presidents who think they’re lawmakers,” Lee explained. He compared it for the students to playing a game with a friend who keeps changing the rules so he can win every time. “That’s what happens when you allow the same people to make the law who also are in charge of enforcing the law.”

He told the students that Warren’s warnings have become reality over the past 80 years as states have given much of the power they once held to the federal government, and Congress has delegated much of its power to executive departments.

He invited the students to come see what it looks like when the executive makes laws. “I keep two stacks of documents behind my desk in Washington.” One stack contains the laws passed by Congress the previous year. It’s “a few inches tall and it’s a few hundred pages long.”

The second stack “consists of the laws made by executive branch bureaucrats.” It contains 97,000 pages and stands 13 feet high.

Finally, Senator Lee taught the students about the need to assert their rights as he told the story of Mumbet, a slave who lived in Massachusetts and used the provisions of the Massachusetts constitution to win her freedom in 1781.

“Without waiting for anyone else to free her, she herself decided to assert her rights even though it was difficult,” he said. “Mumbet became the first slave to win her freedom.”

Lexi MacArthur, a 7th grader from Lehi who attends the school, said the final story deeply impressed her. Recounting the details of the story, she said, “I didn’t know there was a slave named Mumbet and her sister Lizzy!” She also laughed when the senator told the students that Jell-O is served in his office at 3:30 on Wednesday whenever the Senate is in session.

Tori Cook, an 8th grade AHS student from Lehi, said, “I like how he made it relatable to us.”

Senator Lee stayed at the school for close to an hour after his speech to greet students and parents and take photos. Senator Lee’s children attended American Heritage School before his election to the Senate, and his wife also attended the school when she was a child.