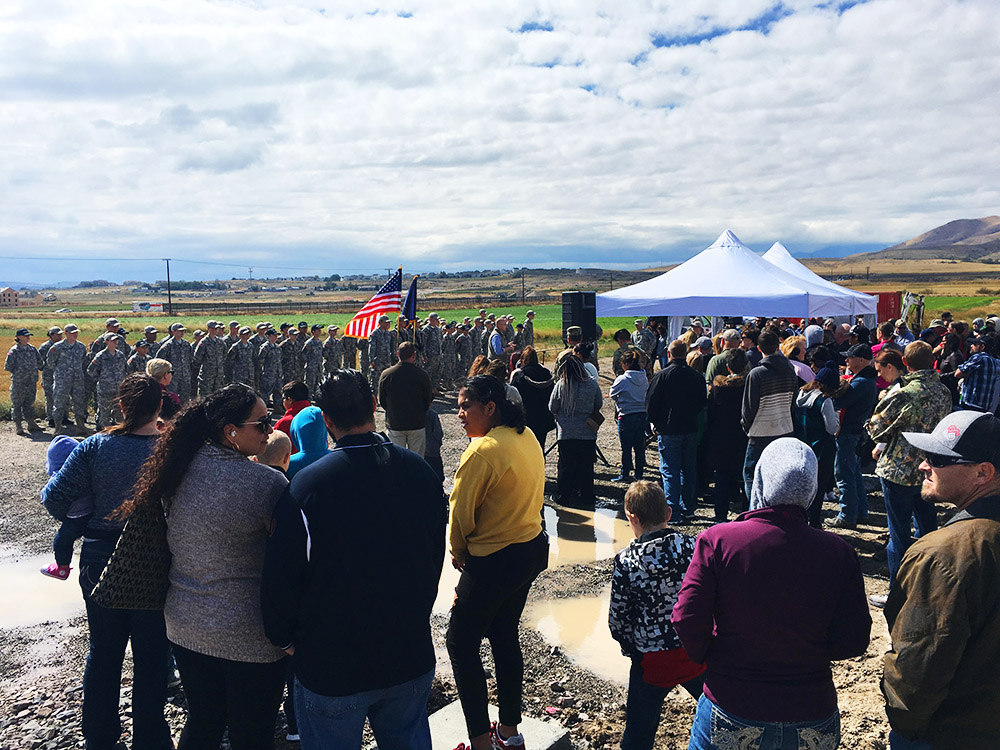 Despite the brisk, chilly wind that blew from start to finish, the rain held off just long enough for cadets at the Utah Military Academy (UMA) to break ground for their long-awaited campus in west Lehi last Saturday, September 23. A few rays of sun highlighted the scene before finally disappearing behind rainclouds just as the ceremony drew to a close.

About 125 family members, faculty and distinguished guests joined about 100 cadets at the edge of a stubbly field near 3800 West 2100 North to celebrate the beginning of construction of the second campus for the Utah charter school. UMA currently operates a school in Riverdale, which is associated with the Air Force. The Lehi location, which is called the Valdez-Peterson campus, will be associated with the Army.

Oda, who serves with Williams on the UMA Board of Directors, played a part in the establishment of UMA when, in 2013, he worked on passage of a bill to allow military-based charter schools. There was no legal provision for setting up a military charter school prior to passage of the bill, which was run by Senator Howard Stephenson.

Oda said the idea for the bill originated about seven years ago after discussions he had with UMA’s Commandant of Cadets Major Kit Workman, who at the time was working with the Air Force JROTC program at Clearfield High School, Oda’s alma mater.

“The timeline for everything was very quick,” said Oda. The bill went into effect in July 2013, the application was submitted in September, the school received preliminary approval in November 2013 and final approval in March 2014, and the Riverdale campus opened in August 2014.

Speakers addressed the students with words of inspiration. “This is not just a building,” said Matt Throckmorton, UMA Executive Director. “It’s a symbol of vision, mission and values.”

Maj. Gen. Burton quoted the words of General Mark Clark, saying, “A nation rises or falls on the quality of its leaders.” He said that UMA would help inspire and cultivate the qualities of leadership in its students. “Whether they join the military or not, their experience here will make them better citizens,” said Maj. Gen. Burton.

Commandant of Cadets Major James Peterson challenged the cadets to “earn this.”
Speeches lasted about 30 minutes, then four students – two 7th graders, one 10th grader and one 11th grader – took up their shovels and hardhats alongside a few of the distinguished guests as they turned over the first piles of dirt.

“The goal is to have the foundation dug before the frost so the building can go in during the winter,” Throckmorton said, with construction finishing in time to move things in and get ready before school starts.

The Lehi school opened this year at a temporary location in American Fork after original plans to place it near Pioneer Crossing and Center St. met with opposition from residents of the neighborhood. Matt Throckmorton, Executive Director, said in June that he is pleased with the second location and feels it has advantages over the initial site.

Enrollment is currently at about 250 cadets, and expected to reach between 500 and 600 when it opens at the official location next school year.