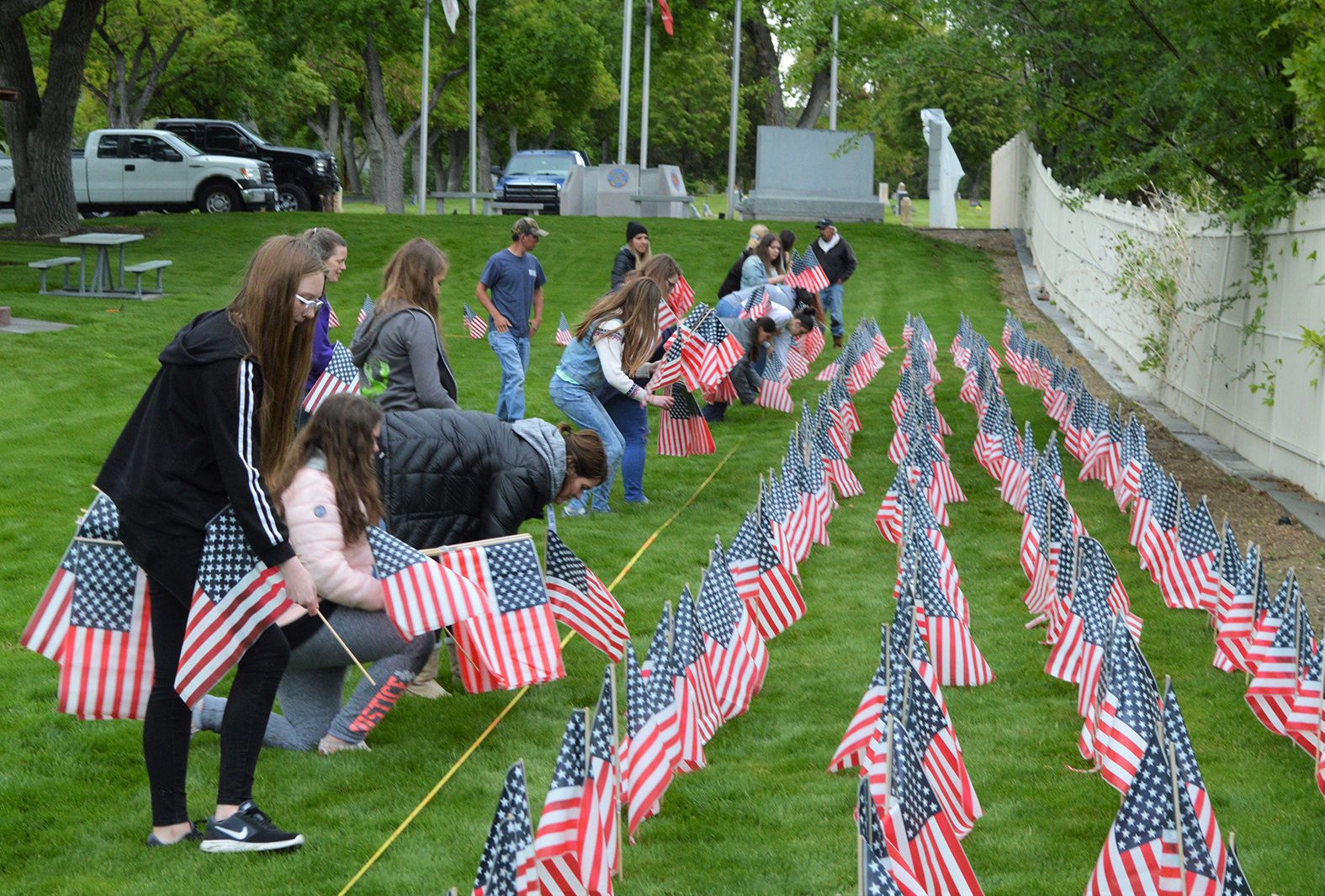 A group of young women from the Lehi Willow Park Ward of the Church of Jesus Christ of Latter-day Saints placed flags on the grass field near the Veteran’s Memorial Wall at the Lehi Cemetery last Wednesday, May 22. Each of the 922 flags represents a military veteran buried in the cemetery.

“The Young Women expressed an interest in recognizing the veterans on Memorial Day somehow. We wanted to place a flag on each of the grave markers of the vets, but only some of them are marked. We would have had to find their names on the Veteran’s Wall and search the cemetery for their marker to place the flags,” said Debbie Gulledge, president of the Young Women’s group.

Shawn Winters, the sextant at the cemetery, suggested they place the flags in the Veteran’s Field instead. Winters made a few calculations to determine the amount of space they’d need and tried to keep it close to the road where people driving by would be able to see the field of flags.

“I’ve had people ask about placing flags before, but we don’t have a military section and not all the veterans have a military marker on their stone, so it’s hard to find all of them,” said Winters. This is the first time the Lehi Cemetery has honored each veteran with a flag. “A project like this is a little overwhelming for the volunteers who do military honors. Everybody wants to do something for the veterans, and this is a cool idea. This is the first time we’ve done this – who knows where it will go from here,” continued Winters.

Finding almost a thousand flags ended up being a little tricky for Gulledge. She contacted Colonial Flag in Sandy, Utah, to see if they were able to donate any flags to offset the cost for the church group. Colonial Flag couldn’t donate the kind Gulledge originally asked for, the hand-held cloth flags, but they did have 12-inch by 18-inch plastic flags. “They told me no one wants the plastic ones. This is the size they use for memorial markers, though, so they’re perfect. I hoped they’d be able to give us maybe half the number we needed, but they donated all of them to us,” said Gulledge.

“The idea was to build our own little Arlington here in Lehi,” explained Gulledge, who grew up moving all over the country with her military family. “I would love to keep all of the flags and do this every year, adding flags for veterans who pass away during the year,” continued Gulledge. The 922 flags were placed two feet apart, 130-feet down and 30-feet across, which created a sobering sight for those visiting the cemetery over Memorial Day weekend.