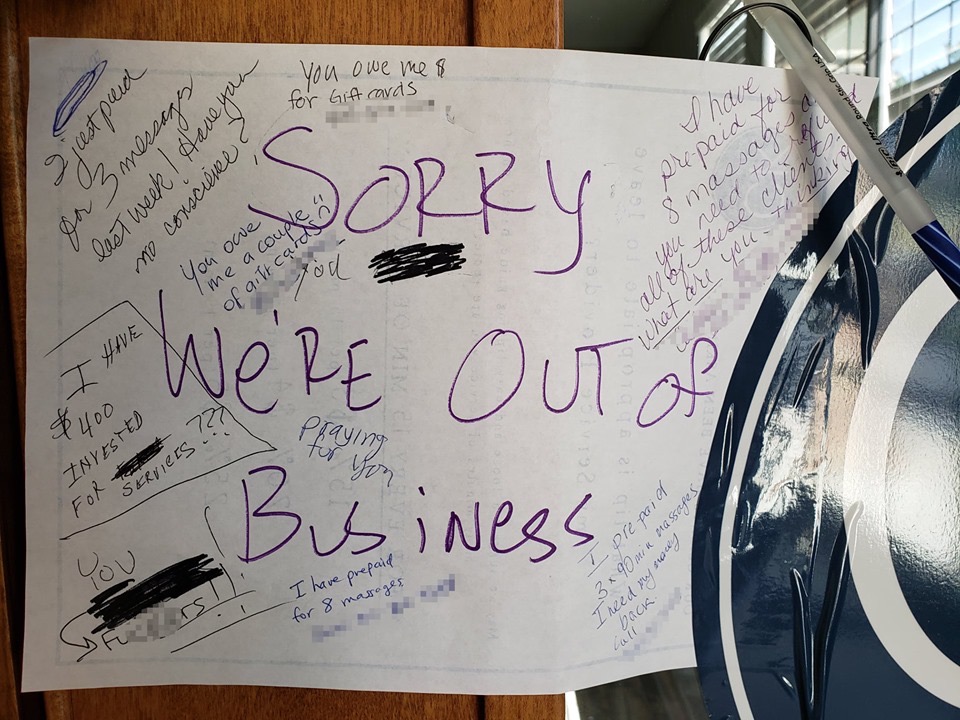 CK Massage and Spa in East Lehi, suddenly closed Sunday September 15. The local massage parlor’s closing came as a surprise to employees and customers. “They told us (the employees) all last night at 6, same as all the customers. Completely blindsided.” said former employee Brinlee Ekins Allen. CK Massage, owned by Casey Kleinman of Provo, was a popular destination for many Lehi residents over the last 8 years.

CK Massage sent out a text message to it’s customers Sunday night to notify them of the unfortunate decision. The news quickly spread through social media, where numerous customers expressed their anger about losing unused membership credits and gift certificates. “We had 20 unused massages that were purchased some time ago. Always had a large rolling credit balance as I was going in weekly at times to help with migraines. Very disappointed in how this went down.” Said Lehi resident Doug Moller. Pre-paid memberships and gift certificates weren’t the only thing customers lost, as the company was well know for it’s Groupon offer. As of Wednesday, over 1,400 Groupon offers had been purchased with an unknown amount still unredeemed. The frustration wasn’t just limited to social media, as the company deleted it’s Facebook and Instagram accounts, consumers headed to the brick and mortar location to leave notes of anger and a plea for refunds.

Late Wednesday, a spokesperson for CK Massage released the following statement regarding the closure:

Although many, many small businesses close within a matter of years no business owner begins a business anticipating a sudden closure.  CK Massage & Spa began with the best intentions and good faith. The business grew quickly. To keep up with the demand, and in an effort to do things the right way the owner hired an accountant. This accountant used questionable accounting methods and failed to pay proper business taxes. When this was discovered a few years later, the owner fired the accountant hired a new (excellent) accountant and began to try and repair the damage that had been done to the business. Part of this strategy was to sell services at a steep discount, all the while, trying to maintain appropriate wages for the employees. This meant that the business and the owner particularly took the hardest financial hits. It is common for a business to run at a deficit, using sales redeemable in the future to pay for current costs. The plan was to gradually increase the prices of the services to more a market-appropriate level to eventually be able to clear the tax debts and run the business in the black. To supplement the business coffers the owner went without pay. Sadly, the customer-base being accustomed to the deep discounts did not buy services when the prices rose, even slightly. When it became clear, only last week, that the sales goals were not being met and the business was no longer viable the owner had to close the doors. Unfortunately, this leaves some customers with credits that cannot be redeemed. The owner would refund the customers if he could, but the money simply isn’t there. The tax debts remain however and that is something that the owner will have to carry for years to come. It is easy to look back and see where different decisions could have been made. It is easy to point fingers and clutch our own injuries seeking for vindication or even revenge. Neither of those things will change the fact that the owner did his best to serve his employees and customers but was ultimately forced to close the business.

After the statement was released, American Fork resident, Charity Carter encouraged the community to have empathy and compassion for the now bankrupt ownership saying “Just wishing him peace during some of the darkest days for him. I’m bummed. I was looking forward to my massages but it’s nothing compared to his personal hell through a series of poor decisions. Empathy and compassion.”

Customers who have experienced a financial loss due to the CK Massage closure are encouraged to reach out to their individual financial institution or Groupon to inquire  about potential refund possibilities.