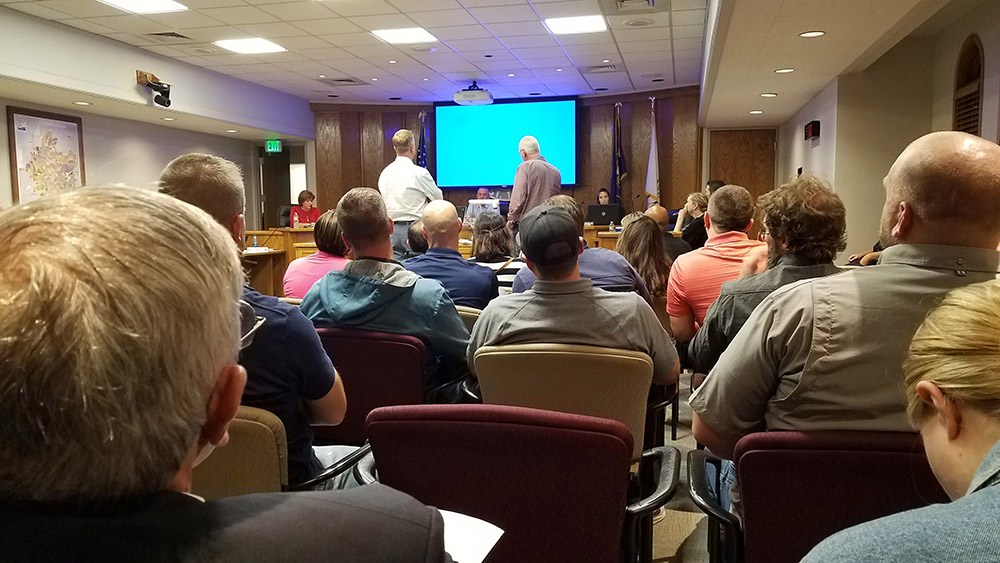 The Lehi City Planning Commission met on Thursday, September 12. The bulk of the meeting involved an Edge Homes presentation for development of 149.40 acres that straddles Saratoga Springs and Lehi on the northwest border.

Brandon Watson, Vice President of Land Development for Edge Homes, showed the Planning Commission members a concept for an 856-unit residential development on the 149.40 acres at approximately 3600 West 1500 North. The land has been owned by Scott McLachlan and has been occupied with his mink ranch for many years. Edge Homes presented the Planning Commission with a request to adjust the boundary so that the entire property would be within Lehi City.

“The reason for this boundary adjustment is a lack of serviceability by Saratoga Springs. There is a lot of infrastructure needed for this property. The adjustment makes sense for both cities,” said Watson. He continued to point out the emphasis on water conservation in the concept plan as well as the parks, trails, and community center with a swimming pool, pickleball court, and plaza included in the plan.

“So, if I’m hearing you right, the Engineering Department decided what density that area would be before the boundary was adjusted? Is that the right way to do that? I want to make sure we’ve gone through the right steps and analysis,” said Jared Peterson of the Planning Commission.

“It seems to me that’s almost creating an addendum to the general plan, anticipating that there are pieces we’re going to absorb with city boundary adjustments,” added Matt Hemmert, Chairperson of the Planning Commission.

“We knew there was a sewer line that has to cross the river. We looked at that area of Saratoga Springs because it looks like it would be added purely from an engineering standpoint. If it had stayed in Saratoga Springs, we would have had extra capacity in Lehi. We didn’t necessarily determine the general plan. We have the physical capacity and infrastructure for the land,” explained Dinsdale. The engineering staff determined that Lehi City can serve up to 480 units in the area in question and Edge Homes is asking for service to 379 units.

“We spent time with the staff, city council, and mayors of Lehi and Saratoga Springs. The view-scape and shift of density is the more presentable, harmonious option for changing the boundary. It’s been an emotional issue on both sides,” said Steve Maddox of Edge Homes.

During the public hearing on the Edge Home request, Kreig Johnson expressed concern about Edge Homes’ plan to control water run-off during construction as most of it will flow through Johnson’s ditch on his property. Mark Newman and Boyd Brown, property owners around the Edge Homes proposal, both like the plan and are working with Maddox as they make their own plans. Lehi City staff could not answer when 1500 North will connect to Redwood Road, a vital piece of the traffic puzzle for the proposed development.

“I always pay attention to the critical comment section. It says we don’t have the ability for water, safety, fire, and there’s not enough P.I. or culinary. There’s a recommendation that this plan not move past concept. Do we know at what time we will be able to service this?” asked Hemmert.

Kim Struthers, Lehi City Community Development Director, answered, “We have a new culinary tank on the west side and a new P.I. reservoir on the tail end of construction. We’ll catch up with infrastructure by the time they come with a preliminary plat.”

The proposed development by Edge Homes went through a rigorous design process, according to Steve Maddox. “From a planning perspective this looks somewhat disorganized, but there’s organization in the chaos. We’ve lumped neighbors, product types, and single-family homes on one corner and the net effect is a cohesive neighborhood with senior citizens, junior, and empty nesters. It is a more diversified neighborhood that will stand the test of time from a livability perspective,” said Maddox.

“I live in the Exchange and I love it. The traffic is a problem right now – 1500 North is a two-lane road. When you add all those homes and a high school, how are you going to get people out there?” asked Tim Carrera. Brandon Watson mentioned during his initial presentation that the Alpine School District [ASD] had finalized the purchase of land near the proposed development for a new high school. The ASD has not confirmed that purchase nor the purpose of the land to date.

Regarding the potential traffic issues on 1500 North, Hemmert added, “That was my question.” The concerns about widening 1500 North and connecting it with Redwood Road went unanswered by City staff.

Despite these issues, Edge Homes’ request for the boundary adjustment and review of the 856-unit residential development at 3600 West 1500 North was given a unanimous positive recommendation from the Planning Commission and will go forward to City Council.

The last item on the agenda was a request from Lehi City to amend the development code that any public project, including utility and roadway projects, roadway repairs and overlays, parks and trails construction and maintenance be exempted from the required grading permits in order to remove and dispose of excess materials.

“I’m going to ask a tough question: Why shouldn’t we require the city to get a grading permit. That’s the rule,” said Hemmert.

“These are time-sensitive projects for the public good. We’re trying to give more flexibility to utility and road projects,” said Struthers.

The Planning Commission instructed the city to change the wording of the amendment to be narrower in scope before they motioned to approve the recommendation. Once the changes were made, the request passed unanimously.

The other agenda items approved by the Planning Commission on September 12 were;