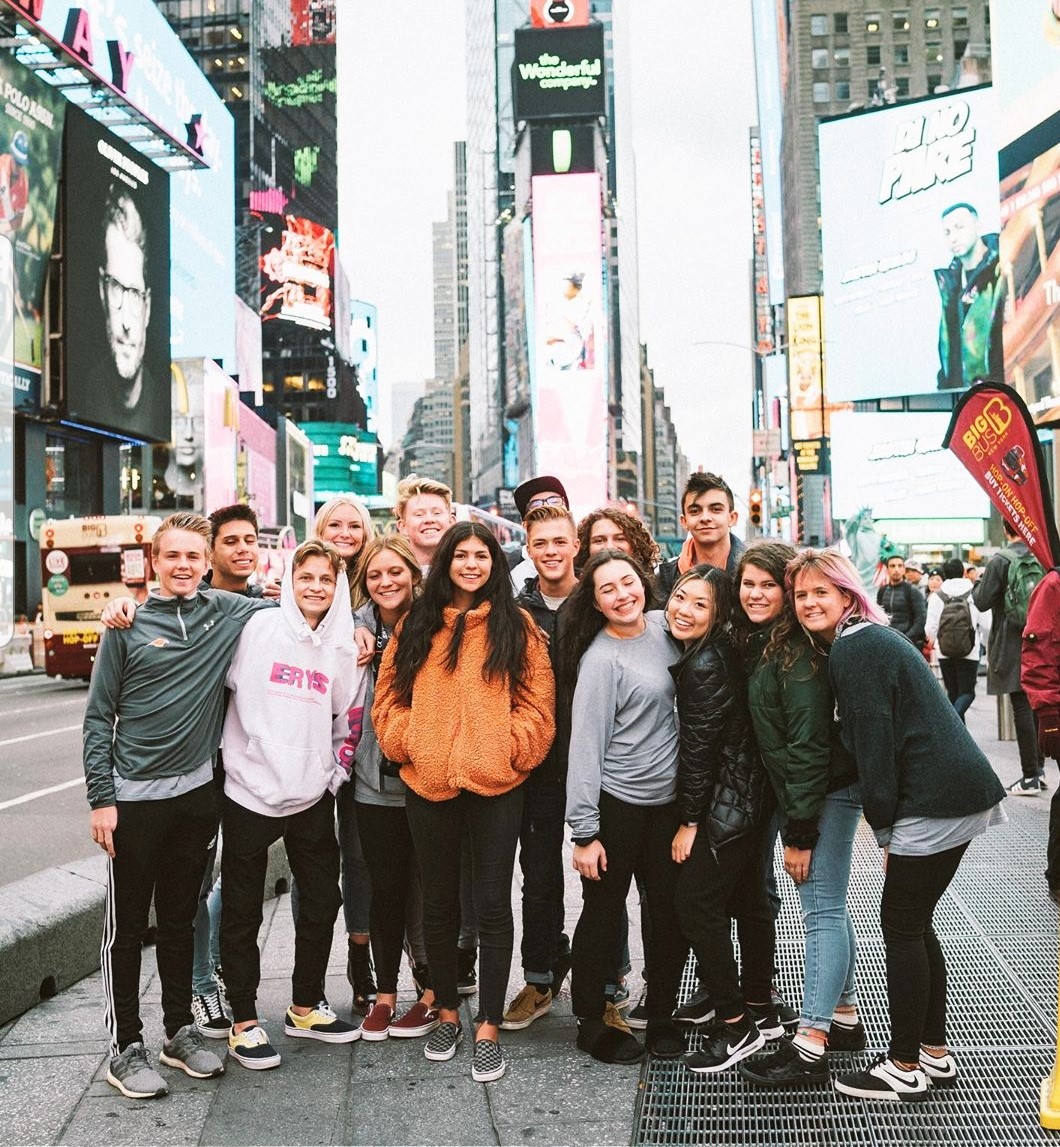 Skyridge High School students from The Ridge, the school’s video crew, recently went to New York City to compete in the All-American High School Film Festival (AAHSFF). They spent six days in the Big Apple creating films and participating in challenges, as well as watching student videos on the big screen and sightseeing. It was the ultimate field trip, with some taking home awards for their films.

The Ridge had three entries in the AAHSFF that were nominated for awards; Travel Video, Highlight Video, and the Public Service Announcement (PSA). Thousands of films from students all over the country are entered in the competition and only the top five are nominated. Beth Bagley and Maya Radmall, 2019 graduates of Skyridge High School, won Best in the Nation for their PSA, “Never Forget How to Love.” The one-and-a-half-minute film assures teens that it’s okay to feel sad and to be discouraged, if they reach out and ask for help. “Don’t lie when someone asks you how you are. Be real, be honest,” the voiceover encourages.

Bagley and Radmall’s PSA was also nominated for a Spark Award at the festival, an award for films that “spark” conversation. “That film was the culmination of their year. They struggled all year long and made horrible videos in the beginning. Then they had this idea, but it was the last week of school and they didn’t think they had time. It ended up costing $50 to hand it in late, but I split the late fee with the girls so they could hand it in. I knew they were going to win when I saw it on the big screen at the festival,” said Zac Durrant, the TV Broadcast, Video Production, and advisor for The Ridge.

During the week-long festival, students were challenged to make and edit films in just two or three days, an eye-opening experience for most of the high school kids. “New York City is the perfect location to create content with other teenagers who love filmmaking. There’s so much culture and diversity there and the urban aesthetic is so cool. There’s such a range of things to film,” said Jacob Willford. “I love going to New York because we get to experience real-world filmmaking, it’s not just something we’re doing with the school,” said Audrey Anderson, a senior at SHS who has been to the festival the last three years.

“New York was such a cool experience. The chaos of making a film in two days and all of us being together was amazing,” said Allie Robinson. Robinson participated in a one-day editing challenging where she was alone in a room editing a film for eight hours straight. “It was a lot of fun, but it was stressful in the moment,” said Robinson.

“Although we didn’t win anything, it was an amazing experience. We saw people from all over the world and learned new techniques and tricks we’d never seen before. I felt right at home with them. It was just a great senior trip,” said Nathan Griffin, a senior at Skyridge. Griffin was on the team that competed in the two-day “Claustrophobic Challenge,” making and editing a film in two days. “It sounds super cliché, but that moment when a student gets it and they’re excited about what they’ve made, it makes everything worth it,” said Durrant.