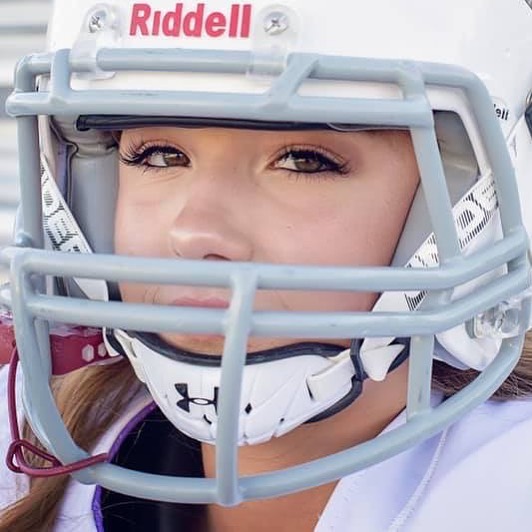 From 50 girls five years ago to 500 players last year, the Utah Girls Tackle Football League is rapidly growing in popularity. Registration has begun for the 2020 season of the Utah Girls Tackle Football League (UGTFL). The UGTFL, the first all-girls tackle football league in the United States, was founded in March 2015 by Crystal Sacco and Brent Gordon.

Sacco, a Salt Lake City-based physical therapist who does swim therapy with children who have severe neurological issues, wanted to start an all-girl football team for kids. Sacco played tackle football in a women’s league and coached boys football. Friends and teammates discouraged her and said there was too much liability involved with girls playing tackle football. In 2014 a video of Samantha Gordon, then nine years old, playing tackle football went viral on YouTube. Sacco contacted Sam’s Dad, attorney Brent Gordon, and pitched the idea of an all-girl tackle football team. Brent agreed, but he wanted to start a real league and make everything official. The co-founders had only three weeks to recruit 50 girls to play football in the Utah Girls Tackle Football League, but they did it. The league now consists of districts or teams in a 5th/6th grade division, 7th/8th grade division, and a high school division.

“The girls didn’t grow up playing football, so they really listen to the coaches,” Sacco said. “They think outside the box – they want to know all the strategies and reasons behind the plays.” Sacco coaches a high school team in the UGTFL. Her teams tend to start out as underdogs, which is Sacco’s specialty. “We have girls in really tough situations in their home life and this is their family,” she said. “This is where they learn to channel their anger appropriately and get exercise.”

For some of the players, football is the only sport where they fit in because of their size. Sacco has had to get new uniforms halfway through the season because the girls end up losing so much weight. It’s not always the big girls playing – Sacco has had ballerinas and cheerleaders on her teams, too. “One girl showed up to practice with long fake nails. I told her that wasn’t going to work,” Sacco remembered with a laugh. “The girls are so different from each other, but when they’re on the field, they are a team.”

The only difference between the UGTFL and boys tackle football is the girls league doesn’t do special teams – there are no kickoffs. That has helped cut back injuries, especially concussions. “Parents are worried about their kids getting concussions, but they can get concussions in cheerleading and soccer – any other sport,” Sacco said. “It’s important to teach them proper technique when they’re young. Their muscle memory is strong right now, that will help them avoid injuries.” The UGTFL requires all coaches to be certified by USA Football, a process that teaches proper tackling and blocking techniques designed to take the head out of play. It also teaches coaches to identify and respond to common injuries such as concussions.

Brent Gordon and Samantha Gordon filed a lawsuit in 2017 alleging the state of Utah and its school districts were violating Title IX by not offering girls football as a school sport. In April 2019 a federal judge ordered both sides of the lawsuit to conduct a survey to gauge interest level in girls tackle football as a school sport. The Gordons continue to fight for the sport they love, but no official ruling has been made. Registration for the UGTFL is open now and practices begin March 16, 2020. Go to utahgirlstacklefootball.com for more information.