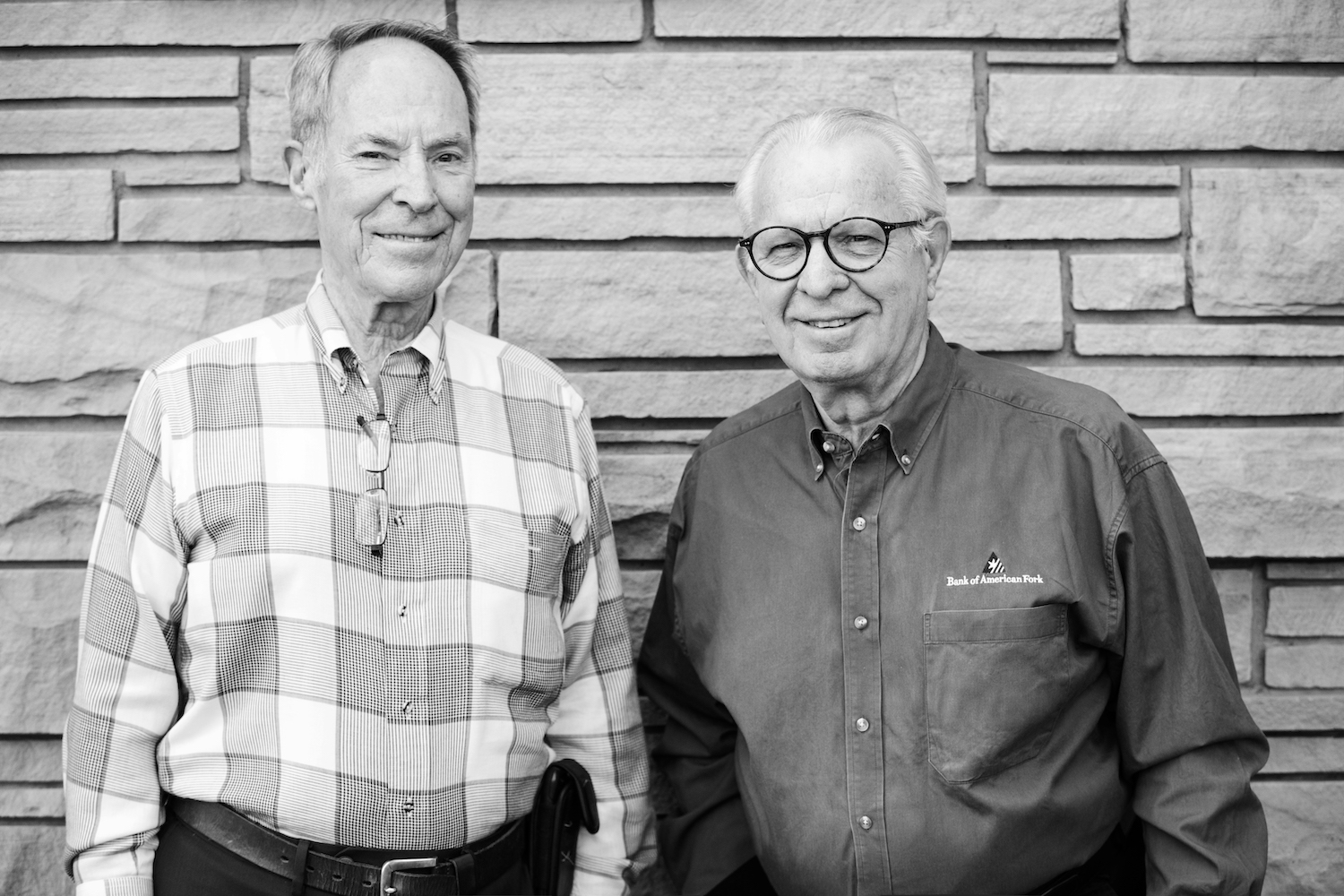 Richard Carl Frederic Gunther immigrated to the United States as a 17-year metalsmith from Leipzig, Germany. He worked for a time on a farm in Salt Lake owned by Wilford Woodruff, Prophet of the Church of Jesus Christ of Latter-day Saints. Gunther worked at various jobs before moving to Lehi. One of the highlights of his life was serving Teddy Roosevelt when Gunther worked as a waiter at the Alta Club in Salt Lake City. After Gunther moved to Lehi, Teddy Roosevelt requested that Carl Gunther serve him whenever he ate at the Alta Club. When asked, Carl would drive to Salt Lake City to serve President Roosevelt.

Gunther could play the zither and while he was living in a boarding house, a young woman asked if he would teach her how to play this uniquely German instrument. He did so and eventually fell in love and married Marie Rutishauser, a Swiss immigrant.

In 1909, Gunther had earned enough money for a down payment on a 13-acre fruit farm in Lehi, much to the dismay of his wife. She wanted to remain in Salt Lake City. The seasonal nature of his farm work allowed him to also ply his skill in metalwork. He did sheet metal work for the Lehi Sugar Factory in the shop behind his home near the old Sego Lily school. His skill in sheet metal work soon spread and when the Sugar Factory closed down in 1924, his reputation as a skilled craftsman created a new opportunity. Carl found he could support his family with his sheet metal business.

Carl’s son, Orville, learned sheet metal craft as a young man. After graduating from Lehi High School, Orville entered into a partnership with his father before leaving on a mission to Germany and Austria. Upon returning from his mission, Orville graduated from BYU and taught school at American Fork High School.

In 1942, Carl fell from a ladder and the accident took his life. Orville quit his teaching career and took over the family business. At about that time, natural gas was becoming a popular fuel for heating homes. The young Gunther learned how to install natural gas heating systems. His innovative ideas and excellent workmanship propelled the prospering business. The name of the business, Gunther Sheet Metal, was later changed to Gunther’s Comfort Air as it expanded into air conditioning, solar heating, and plumbing.

Orville was also involved in the banking industry. Clifford Young, President of the Peoples State Bank of American Fork asked Gunther to join the Board of Directors. Orville eventually became Chairman of the Board. Orville became prominent in Utah business circles. He was involved in politics and served two terms in the Utah State House of Representatives. In 1961, then-Governor George Dewey Clyde appointed Orville as the Chairman of the Utah State Tax Commission.

His Church service included Bishop, Mission President in Munich, Germany, Regional Representative in Europe, and on the Sunday School General Board. He and his wife, Betha, were called as President and Matron of the Provo Temple.

Orville raised his oldest children in Lehi. His oldest son, Dale, loved living in the 4th Ward area of Lehi where he played Church basketball. “At the time, there were no little league programs for baseball, basketball, or football, and no recreation programs for kids, so we played ball wherever we could find a hoop for basketball or a lawn for football. We also played church basketball and softball. It was a very memorable time for me,” said Dale.

Dale was elected Studentbody President of Lehi High School. He remembers being on the track team and never winning a race. His favorite sport was football where he played quarterback. He played against Pleasant Grove when Paul (Horse) Allen, a legendary football player, dominated the game. Lehi was beaten soundly by the Vikings that year. In 1961, Dale married RoseAnn Hansen after serving a mission in the Great Lakes area. He went to BYU and studied to become a psychologist. He took some business and economics classes and decided he loved the business field, so he graduated from BYU with a major in Finance and Banking.

Dale managed two companies his father owned, Alpine Credit Corporation and Gunther Comfort Air. In 1971, Orville and Dale bought shares from Clifford Young’s heirs which increased the Gunther Family holdings to over 50% interest in Bank of American Fork, which was originally named Peoples State Bank of American Fork. When his dad had open-heart surgery in 1968, Dale became a full-time banker, and Dale’s two brothers, Dean and Blaine, took over operation of Gunther’s Comfort Air. Dale’s brother Paul joined the Bank’s Board of Directors soon thereafter and was instrumental in the future growth of the Bank.

Under Dale’s service as President and later as Vice-Chairman of the Board and with Paul as Chairman of the Board, the Bank of American Fork expanded its footprint by opening branches in Alpine, Highland, Lehi, Pleasant Grove, Orem, Spanish Fork, Riverton, Murray, Draper, Layton, Bountiful, Salt Lake City, and St. George, and acquired ownership of several other community banks, a Dean Witter Branch in Sandy, Lewiston State Bank, and Town and Country Bank. With the growth and geographic diversification of the bank, along with the different names of the acquired banks, the board decided that it would be more efficient to adopt a common name for all the banks. They consolidated the names of the various branches to better identify under one name–Altabank.

It was in the early 1980s that younger brother, Paul, came on board, first, as a strategic planning consultant and then as a member of the Board of Directors of the bank. Like his brother Dale, Paul had also served as Studentbody President of Lehi High School. In early 1962, Paul began serving a mission in Berlin, Germany just after the Berlin Wall was constructed. One of Paul’s official duties was to smuggle temple clothing, prescription drugs, and church literature into communist East Berlin and deliver them to church members.

Paul graduated from BYU and went on to get an MBA from Harvard Business School. Paul and his wife, Lynda Chatfield Gunther, have lived and raised their family in New York City.

Following in his father’s footsteps, Paul also served as Chairman of the Board of the Bank of American Fork. Paul’s professional career also includes Director of Strategic Planning for Target Stores. “I started working for them when they had just 12 stores,” he said. “One of my first responsibilities was to lead a task force to determine what Target needed to do organizationally to grow from 12 to 100 stores.” Paul has been involved in consulting for several retail chains and other businesses on the east coast. He also helped guide the growth of Bank of American Fork as it acquired several smaller banks. “We now have 26 branches of Altabank,” he said.

When asked about his involvement in banking, Dale answered passionately, “I love the banking business. We are dream makers. Banks are trusted with the financial resources through deposits of the communities they serve to help people achieve their dreams. Banks are profitable, but for me, it really is not about making money. The higher purpose and goal for me is to use money to help people realize their dreams. Banking flies on the wings of its people.”

RoseAnn and Dale have established a private foundation called the Launfal Foundation which provides scholarships for single mothers to attend post high school institutions. They believe education is key in lifting people. The Foundation also buys supplies for humanitarian projects. The family continues to quietly use their resources to help improve the lives of others, both locally and internationally.

Epidemic of 1918 wreaked havoc in Lehi