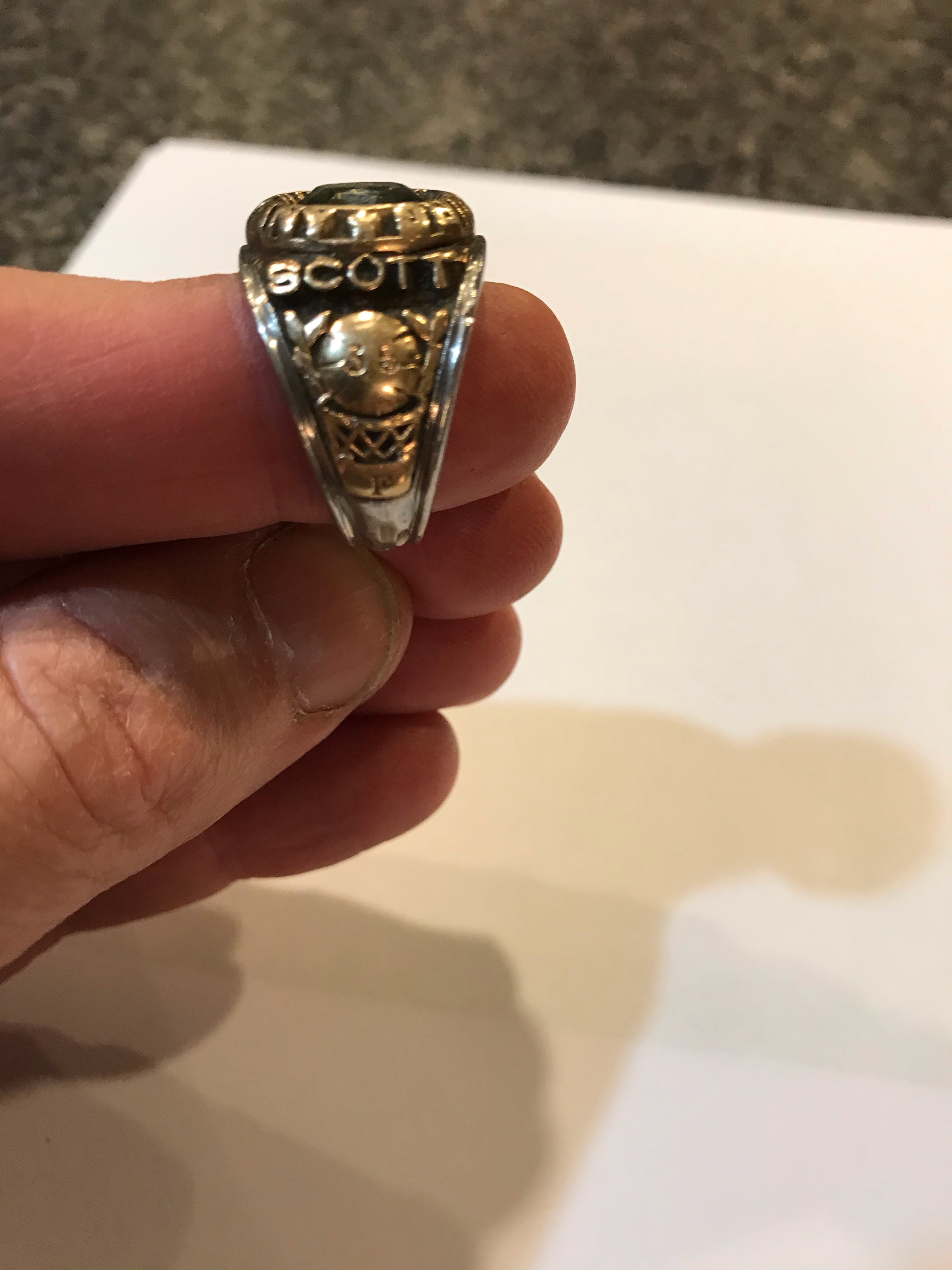 `Lehi resident Scott Sanders has been working from home for the last few months and feeling a little like every day is Groundhog Day. On Sunday, May 3, that all changed as Sanders was reunited with a turquoise ring he lost last October and his high school ring he lost in Germany in 1982 on the same day.

“God is all over this. It doesn’t even seem possible,” said Sanders of the miraculous recovery of his treasures. The journey his class ring took over the last 38 years is especially unbelievable. Sanders went to high school in Bitburg, Germany, on an Air Force base; his father was an Air Force major. As a sophomore, Sanders helped design the class ring and he wore it with pride for two years. When he was a senior in high school, Sanders took his class ring off and set it on a towel dispenser while he washed his hands in a bathroom on the base. He forgot the ring and walked out, returning 15 minutes later to find it gone. “I thought it was lost forever,” Sanders remembered.

Fast forward to May 3 this year, and Scott Sanders was at his in-law’s house looking for a custom-made silver and turquoise ring he lost last October while turning off their water for the winter. Sanders decided he wanted to try to find the ring that Sunday afternoon. “I said a prayer and the neighbor said a prayer too. We found it pretty quickly – I couldn’t believe it,” said Sanders. He posted the story and a few photos to social media, remarking that God is in the details. “If He can keep track of this ring, He can keep track of each of us.”

Meanwhile, in Twin Falls, Idaho on Sunday, May 3, Dan Thomander was on Facebook searching for the Scott Sanders who had graduated from Bitburg High School in 1982. Earlier that day, Thomander’s elderly father-in-law returned two rings to his son-in-law. The rings had been in Thomander’s father-in-law’s safe for about 30 years, having been given to him for safe-keeping all those years ago. Dan recognized one of the rings, but the 1982 class ring from Germany was unfamiliar. As he held it, the memory of finding the ring on a lake beach somewhere in New Jersey came to Thomander. “I remember seeing it in the sand and feeling bad that someone lost such a nice ring,” said Thomander. He was in his early teens at the time.

Thomander searched the Internet trying to find the right Scott Sanders. He finally hit on the right combination of words to discover the digitized 1982 Bitburg High School yearbook online. There was Scott Sanders. Thomander went to Facebook and located Scott, seeing that his most recent post was about finding his turquoise ring that was lost six months ago. “I couldn’t believe it! He could’ve found that ring any time, but he found it the day I found him. I got the chills. Here I was holding the ring he lost 38 years ago,” said Thomander.

Thomander sent Scott Sanders a message and soon the two men were video chatting like old friends. “Our paths have crossed several times over the years. It’s been interesting to compare stories. We have so much in common,” said Thomander, who is five years younger than Sanders, but both are members of The Church of Jesus Christ of Latter-day Saints and have attended Brigham Young University. Dan decided to take a road trip to American Fork to meet his granddaughter who was born early in the quarantine for COVID-19 and make a stop in Lehi to deliver the long-lost class ring to Sanders.

“I’ve moved a lot and there are many, many items that have not survived those moves – including my own high school yearbook. If I hadn’t given Scott’s ring to my father-in-law, it would have been lost forever. When I read what Scott wrote about seeing God in the details of his life, I thought, ‘I’m so happy to be returning a ring to a guy like that,’” said Thomander.

“This has been a nice break from COVID-19,” Sanders said. “I’ve enjoyed going through my high school stuff and reminiscing and reconnecting with old friends. It’s reminded me that God knows all of us individually. I’ve found every ring I’ve ever lost!”