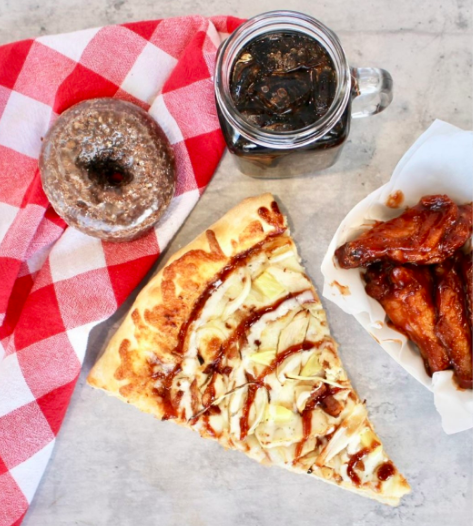 “There’s something to be said for the hometown pizza place – the kind of place you go after a game or a dance recital. Doughboy’s will be that kind of place,” said David Doty of Doughboy’s Pizzeria, 380 North 850 East in Lehi. “It’s going to be a comfortable, fun place to be.”

David Doty grew up in Pittsburgh, but he and his wife Danielle have made Lehi their home. They own and operate the Lehi Bakery, keeping the classic square donut and getting involved in school fundraisers and hiring local high school kids. Instead of branching out and opening bakeries in other Utah towns, the Dotys want to keep their businesses in Lehi.

The Dotys had a concept for a pizza place next to their bakery on Main Street – where the businesses would share a kitchen, but the space wasn’t quite right. When the Moochies restaurant just off State Street went up for sale, David Doty immediately bought it. “That was a no-brainer,” said Doty. They’ve gutted the inside of the restaurant, replacing almost everything from the floors to the ceiling. What they didn’t replace, they’ve repaired, like the banquette seating lining the inside of the entire restaurant.

“We are invested in Lehi. We love our little bakery, and we want to try our hand at pizza and sandwiches,” said Doty. Doughboy’s will specialize in pizza made with the best possible ingredients, tomatoes from California and cheese from Wisconsin. Along with all the classic combinations, they’ll have a Kevin Bacon-themed pizza, a nod to Bacon’s scenes in “Footloose,” filmed at the Lehi Roller Mills down the street. Doughboy’s menu will also feature a meatball sub, Philly cheesesteak, chicken wings, fries and onion rings.

The Dotys know their desserts, too, and they’ve created a homemade cheesecake just for Doughboy’s. The restaurant will also carry BYU Creamery ice cream in a cone or in a doughnut ice cream sandwich. “It’s a cake doughnut cut in half with a scoop of ice cream in between like a burger. I’m most excited about that,” said Doty.

“While I am personally biased towards the dessert menu, the fact is that our pizza will be phenomenal. We will be making our dough from scratch and using the freshest, best ingredients,” added Doty.

Doughboy’s Pizzeria will open for dinner on Monday, Apr. 5 at 3 p.m., with a modified schedule until Memorial Day, when they will open earlier for lunch. Everything except whole pizzas, including pizza by the slice, will be available at the drive-thru window at Doughboy’s.

“The Lehi community has really supported us during quarantine. We’re beyond grateful. We’re excited to make Doughboy’s part of the family,” said Doty.