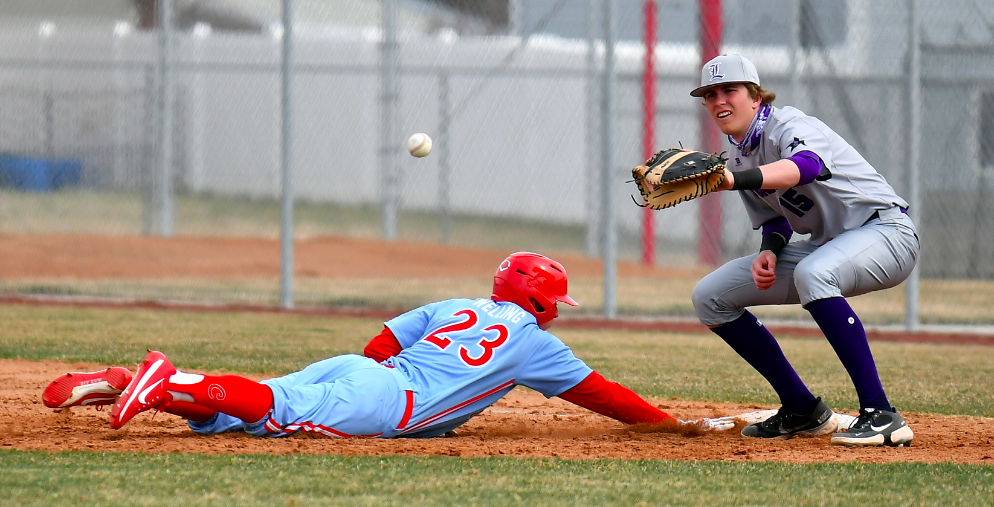 The Lehi baseball team posted a 2-4 record in non-region games to get the spring season underway. In a weather-abbreviated appearance at the Snow Canyon Tournament, the Falcons defeated Uintah on March 12 but lost to Snow Canyon on March 13.

Senior pitcher Chase Carter went the distance on the bump, striking out nine and giving up four hits and just two walks. He also helped himself by driving in two runs. Junior Jaxon Christensen and senior Ethan Zimmerman had doubles and seniors Zach Evans and Creyton Cooper each had an RBI.

The Pioneers just couldn’t get anything going against the Warriors, who scored four in the first, one in the second, two in the third and three in the fifth to end the contest early. Lehi had five hits in the game but couldn’t put enough together to get anyone across the plate.

The Pioneers took the first lead of the game with a run in the bottom of the third inning, but the Colts answered with three runs in the top of the fourth. Lehi plated one more in the bottom half but neither team scored in the fifth.

Cottonwood extended the lead with another run in the top of the sixth, but the Pioneers tied the score with two runs in the bottom half.

They held the Colts scoreless in the top half of the seventh, and sophomore first baseman Jackson Brousseau drove in a run in the bottom half to wrap up the exciting victory for Lehi.

Carter pitched the first five innings and was relieved by sophomore Colby Felix. Freshman Grayson Brousseau entered in the seventh and gets credit for the win.

Sophomore shortstop Jake Olsen had a double, a triple and an RBI in the game. Christensen doubled twice and drove in a run, and junior Denton Lindford also hit a two-bagger.

The Dons plated three runs in the top of the second and had the lead the whole way, although it wasn’t comfortable. The Pioneers answered with a run in the bottom half of the inning. In the third, Spanish Fork got one run and Lehi two to make it 4-3 for the Dons.

The next two innings were scoreless, but Spanish Fork pushed across two runs in the top of the sixth to create the winning margin. Senior Teigan Peterson got the start and Felix finished the game in relief. Sophomore infielder Braden Willes and Jackson Brousseau each drove in a run.

The Caveman batters swung freely against the Pioneers, pounding out 11 hits in a lopsided affair that ended in the fifth inning. Lehi scored one run each in the third and the fifth.

The Pioneers made the most of their opportunities against the Phoenix, scoring 10 runs on seven hits with the help of four Farmington errors, but on the other side of the plate, they weren’t able to contain the opposing hitters.

Peterson gave Lehi a big lift with two home runs and five RBI in the contest. Lindford also homered with two RBI. Evans hit a double and drove in a run, and Olsen also provided an RBI.