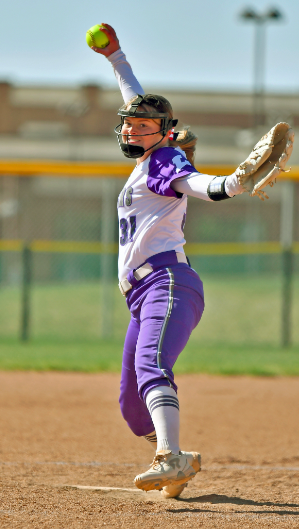 The Lehi softball team wrapped up the regular season on Monday with a shutout over Jordan after securing second place in Region 7 with a 10-2 record. The team’s only conference losses were to league champion Mountain Ridge. The Pioneers earned an 18-9-1 overall record.

Here’s some highlights from the most recent games.

The Pioneers had already boarded the winning margin by the second inning, when they scored five runs, giving up just two to the visiting Hawks the entire game, both in the third inning.

Junior catcher Kenadee Beck led the attack, going 3-for-4, including a double and a home run, scoring twice and droving in six runs.

In this hard-fought contest, the Pioneers were knotted with the Sentinels at 7-7 going into the bottom of the sixth inning, but the home squad managed to squeeze one run across in that turn and the visitors were unable to match it in their final plate appearance.

Carter was 3-for-4, all doubles, and tallied four RBI. Beck was also 3-for-4 including a pair of doubles and scored three times. Junior infielder Jamisyn Heaton belted two doubles as well, and freshman outfielder Madison Salisbury had a triple.

The Timberwolves took the initial lead with a run in the top of the first, but the Pioneers slammed the door shut after that and scored in three later innings to get the win.

The Pioneers had to rally in the late going to pull out this thriller on the road. The Tigers were up 4-2 heading into the seventh inning, but Lehi drew even with two runs that turn and then managed to get one more in the top of the eighth.

The Pioneers held off the home squad in the bottom half to secure the victory. Beck and Ockey each had a pair of hits in the game. Wall drove in two runs, and the other RBI were provided by Takahashi, Beck and Heaton.

The Pioneers won big on Senior Day, dispatching of their non-region opponent in four innings. Junior pitcher Grace Humes threw a no-hitter and had seven strikeouts with no walks.

Nine of Lehi’s 14 hits went for extra bases. Cram had two doubles and a triple, scored three times and drove four runs across. Ockey’s three hits included two doubles and she was responsible for five RBI.

Heaton had a double and a home run, scored twice and made two RBI. Junior left fielder Brooklyn Witbank also had two RBI in the contest.

Lehi and Skyridge athletes prepare to compete at state meet