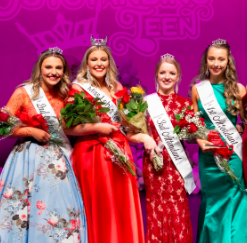 The Miss Lehi’s Outstanding Teen competition was held Saturday, June 5, at Skyridge High School. The 11 talented candidates, which included three sets of sisters, competed for the title of Miss Lehi’s Outstanding Teen. All 11 had prepared for months to showcase their talents, physical wellness, poise, public speaking skills and willingness to represent and serve Lehi City.

AnnaBelle McKinnon’s vibrancy and service experience won-over the judges as she was crowned, Miss Lehi’s Outstanding Teen 2021 at the end of the competition.

McKinnon’s social impact initiative, a requirement for the sister organization of the Miss America Scholarship Organization was, “Let’s Get Creative: Arts Education.” McKinnon is passionate about the Arts and hopes to inspire Lehi City “to get creative in their own lives.” Mckinnon said, “I’ve noticed that throughout COVID-19, the arts are so important in our lives. When everything was shut down, it was like we were too. I feel my social impact initiative is important because if people are involved, the arts can change lives.”

McKinnon is the daughter of Noah and Ashley McKinnon and the older sister of newly crowned second attendant, Desiree McKinnon, who also competed at Saturday’s competition.

AnnaBelle McKinnon impressed the judges throughout the competition with her charm and charisma on stage and her beautiful vocal performance of “Never Enough” from The Greatest Showman. As the winner, she won a $750 scholarship.

Miss Lehi’s Outstanding Teen attendants are Chloe Baines (First Attendant), Desiree McKinnon (Second Attendant), and Nickelle Cotterell (Third Attendant). Cambri Burgon was also crowned as an attendant the night of the competition but decided to give up her crown. First Attendant Chloe Baines won a $500 scholarship and a $50 cash prize as the recipient of the “Director’s Award” which was chosen by the competition directors for her leadership abilities. She also wowed the audience with a lyrical dance performance.

Second Attendant Desiree McKinnon won a $250 scholarship in addition received a $100 cash prize for scoring the most points during the talent portion of the competition with her highly skilled and entertaining ventriloquist performance. Third Attendant Nickelle Cotterell received a $150 scholarship. She performed a flawless color guard routine for talent and exhibited gracefulness in her evening gown.

The candidates for Miss Lehi’s Outstanding Teen had interviews with six judges early in the afternoon, then a program at Skyridge High School hosted by Miss Lehi, Lindsey Larsen, and Miss Lehi’s Outstanding Teen 2020, Savana Brown. The candidates energized the audience as they performed a Barbie-themed opening number in which Brown stepped out of a Barbie box and danced with her father, Scott Brown, in addition to taking the stage for a short solo Lifestyle and Wellness routine, Talent, and Evening Wear/On-Stage Question.

“I still can’t believe I am Miss Lehi’s Outstanding Teen! It has been a dream of mine for a really long time. I remember as a kid watching the girls in the royalty and wanting to be one of them and now here I am doing it. Throughout this process I’ve learned to make goals for myself and to be proud of who I am. I am very excited for this year of opportunities and service,” said McKinnon.

Caitlin Thomas, along with her mother, Jennifer Thomas, were co-directors of the competition. “I love being able to work with some of the best teens Lehi City has to offer. Seeing them grow over the last few months has been so rewarding and then watching them shine on stage at the competition was even better. I am proud of each candidate and so excited for the new royalty,” said Caitlin Thomas. “I want to thank Lehi City for the support of this program and for all who came to watch and cheer on the candidates.”

Local artist is featured at Gallery Wild in Jackson Hole